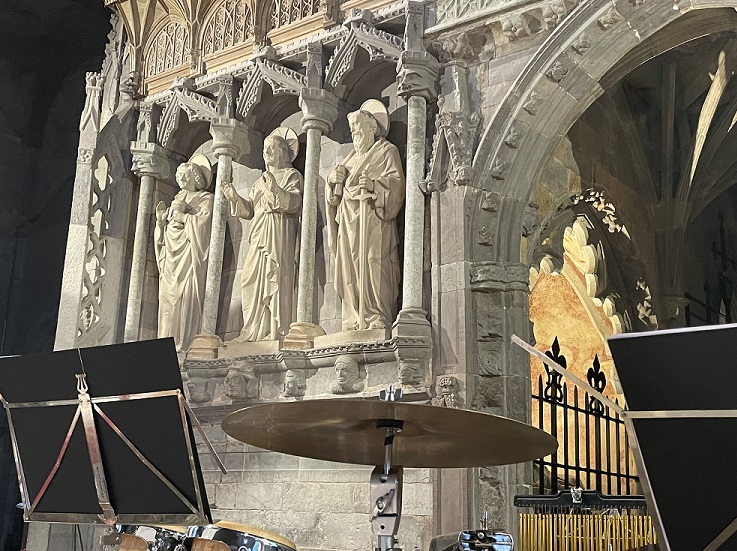 Pilgrims have headed to St David’s Cathedral in westerly Pembrokeshire for over 1500 years – some seeking greater salvation than others (including William the Conqueror), although those who made it to this concert will certainly have left lifted in musical spirit.

The second of three tour performances (in north, west and south east Wales) was delivered with purposeful accomplishment; the 38 players, a smaller ensemble than has been over the 40 year history of the organisation, tested extensively in flexible musical ambition by Philip Harper.

Isobel Daws was the outstanding soloist – a performer of elegant, insightful musicality as was shown with her cultured appreciations of the familiarities of Gordon Langford’s ‘Rhapsody for Trombone’  and Arthur Pryor’s ‘Bluebells of Scotland’.   The shaping of the gem-like facets of Ray Steadman-Allen’s ‘Walk with Me’  flowed with the most tender subtleness.

A century-wide arc of brass band history was broached by the major test-piece selections of Percy Fletcher’s ‘An Epic Symphony’  and Edward Gregson’s ‘Of Distant Memories’  – both played with dramatic impulse and melodic understanding (with excellent solo cameos all round).

However, it was Ian Stephens’ ‘Colston Falls’  that left the lasting imprint on the mind.

It was a remarkable piece of compact storytelling; almost a piece of musical photojournalism as the visceral images of the toppling the statue of the Bristol slave trader once again fired emotive responses in your memory banks; the anarchic sense of celebration tempered by the telling use of a 18th century Welsh anti-slavery hymnal.

It was a remarkable piece of compact storytelling; almost a piece of musical photojournalism as the visceral images of the toppling the statue of the Bristol slave trader once again fired emotive responses in your memory banks;

Elsewhere, the MDs well developed sense of resonating musical connectivity was also shown with the inclusion of Stijn Aertgeerts ‘Hope’  – a thoughtful response to troubling times, Edward Gregson’s ‘Fanfare for a New Era’  in tribute to the founding conductor, and Liz Lane’s celebratory ‘Diamond Fanfare’  which offered a sparkling opening to the second half.

All that was missing from the steam driven luxuriant chuff of Philip Sparke’s ‘Orient Express’  was an appearance by Hercule Poirot, although the players had more than enough latent energy left to blow the cylinders clean in a rousing ‘La Suerte de Los Tontos’  to close.