The success of the National Championship weekend in Cheltenham has also highlighted the need to get the main banding empire builders to at least start talking to each other. 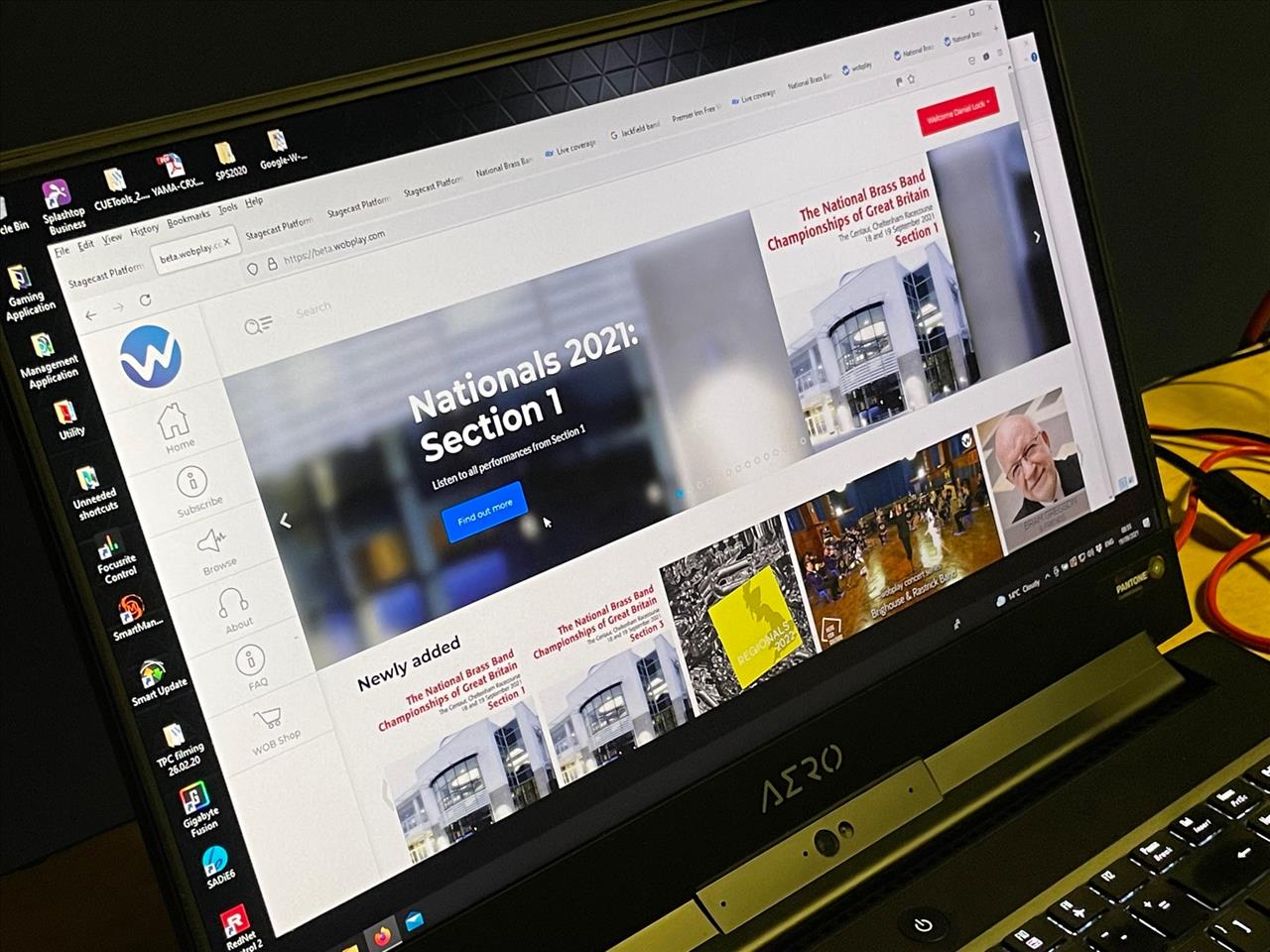 A cold war tension at the heart of British banding may well have begun – with the two main protagonists who hold the nation’s contesting as well as community movements in their hands seemingly reluctant to stop it from becoming even more seriously entrenched.

This weekend Brass Bands England holds its annual conference in Sale (albeit on-line). It too is likely to be a firm endorsement of success.

It is highly unlikely any representative from Kapitol will be in attendance.

The battle lines have been drawn and the trenches dug. The prospect of a long and corroding stalemate looms at the very moment rapprochement between its two most important empire building organisations is desperately needed.

The prospect of a long and corroding stalemate looms at the very moment rapprochement between its two most important empire building organisations is desperately needed.

And at the heart of it all are the troops from bands from all over the UK – cheerfully sent on their way to battle each other on the basis of outdated conscription rules in sections that they are invariably unfit to do their duty in.

All this, whilst the chiefs of staff who should be looking after their welfare have seemingly decided to remain at their Barnsley HQ far behind the lines and wait to find out what news the casualty list brings.

Apportioning blame is pointless now. That much was obvious in Cheltenham, where anecdotal conversations with conductors, players and supporters, traders and banding organisations brought the same conclusion.

Brass Bands England should have been there. Kapitol should be at Sale (or at least accept an invitation to attend on-line). 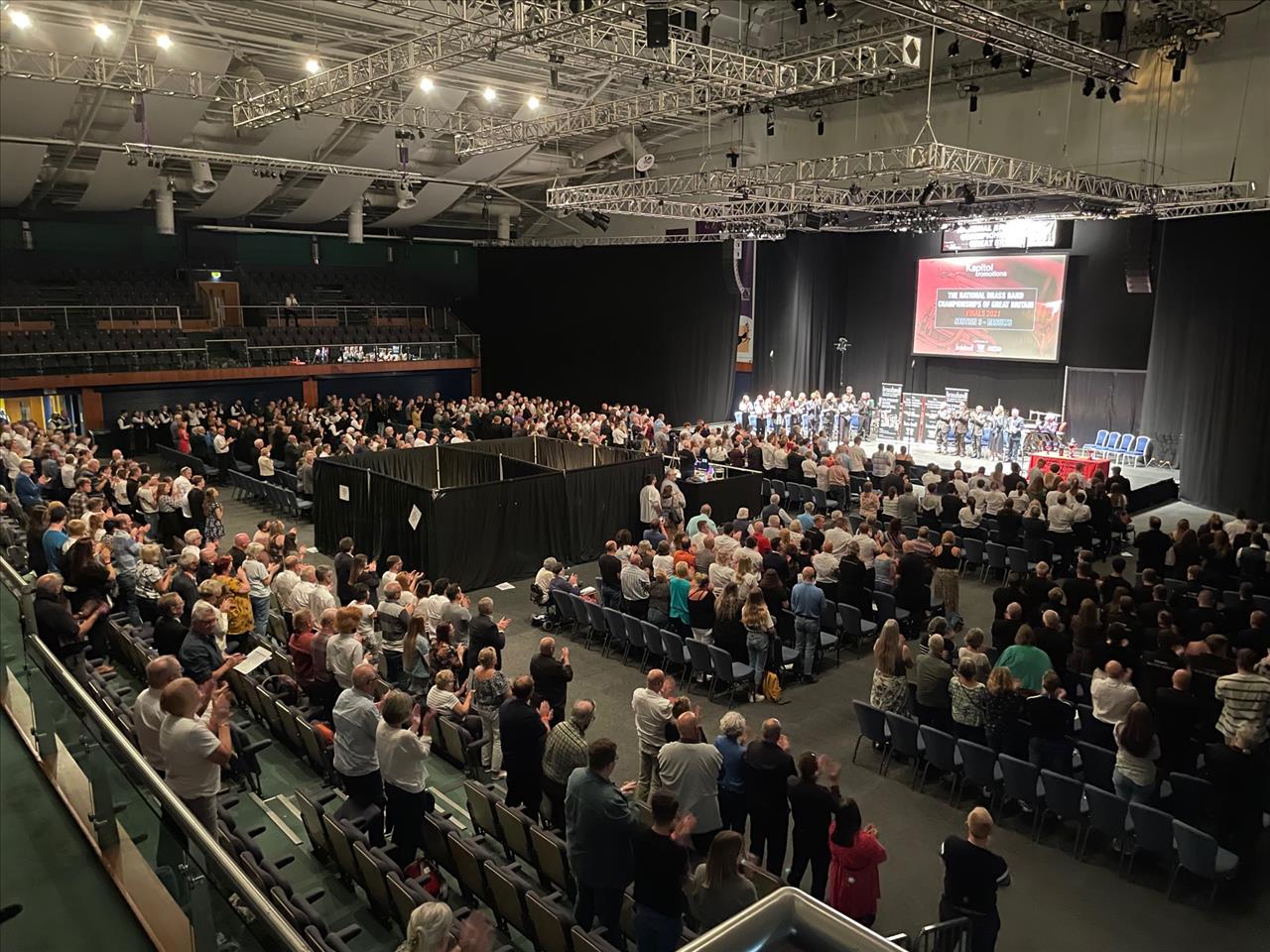 There were plenty of people in Cheltenham - but not BBE

How it has come to this is well documented – the seeds of criticism that bloomed into full-blown distrust were planted well before the war of words was played out in the last Covid-19 weekends of what were to be the 2020 Regional Championship series.

What the narrative lines of propaganda will therefore proclaim over the next week or so will be interesting to read.

Since then both sides have kept their distance; the diplomatic language of press releases notably failing to acknowledge each other’s success in negotiating their way through these troubled times – from BBE initiatives to keeping a brass banding presence at the Albert Hall.

What the narrative lines of propaganda will therefore proclaim over the next week or so will be interesting to read.

Both organisations have substance to boast about – but what use will it be if they are not prepared to speak to each other about sharing their successes rather than simply allowing a focus to develop around each other’s perceived failures?

For instance, we still await the findings of BBE’s banding survey – the final part of which was launched in June 2020. What exactly will that tell us?

It could well make things a degree or two chillier. 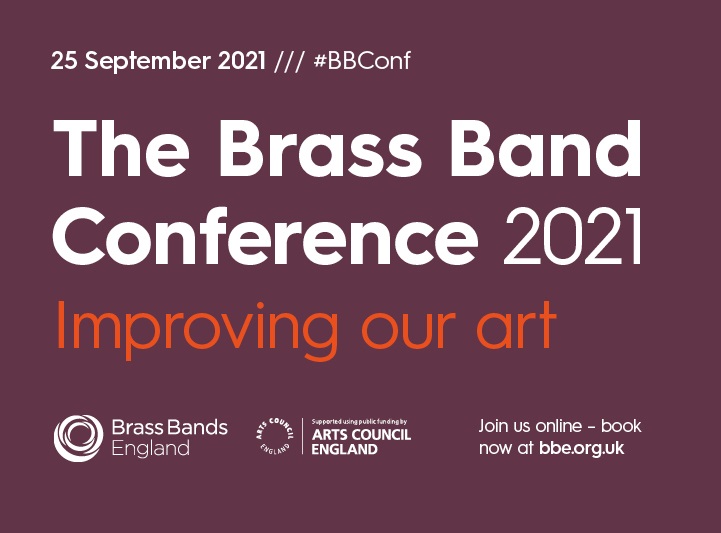 That said there is still common ground which could yet yield a ‘Pax Romanus’ future.

However, unless someone can get Kapitol and BBE together to start discussing things constructively, it makes Neville Chamberlain’s ‘Peace in our Time’ seem like a cunning plan dreamt up by Baldrick in Blackadder.

Much to report on then after 4BR heads to Sale for the Brass Band England’s Conference, but for the time being there was no denying that people were delighted contesting was back at Cheltenham - and at a well organised event.

The communal emphasis on health & safety and personal risk assessment evaluation was given a light touch.

The communal emphasis on health & safety and personal risk assessment evaluation was given a light touch.

The team of Kapitol volunteers led by Tony Griffiths worked their socks off to ensure that requirements and protocols were adhered to – from regular announcements from the stage and the sanitising of chairs and equipment between bands, to clear signage and visible hand sanitising stations. 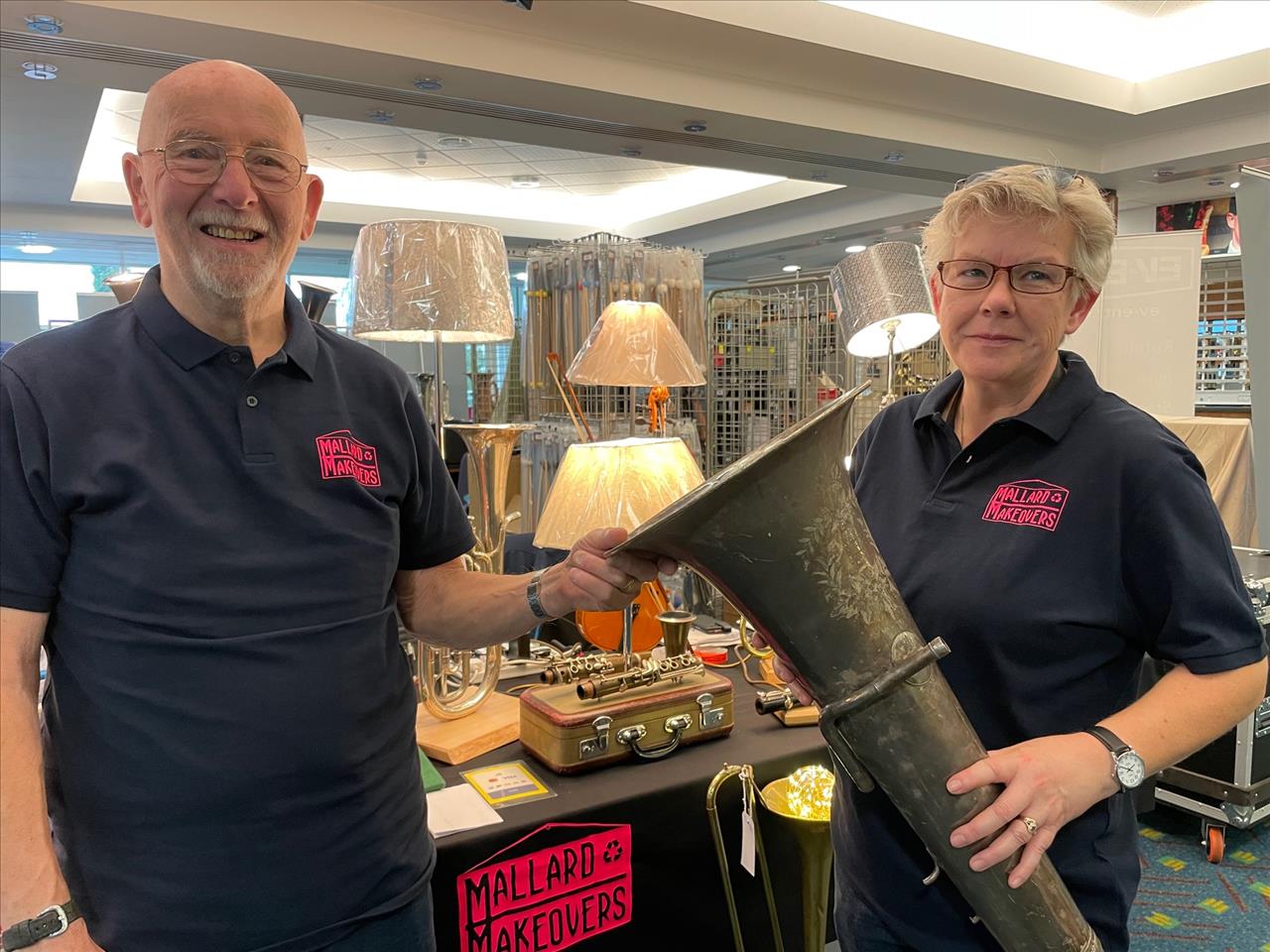 The approach was appreciated by those that took the decision to take part and attend. People were patient and well-mannered, the communal atmosphere (despite the usual gripes about the refreshment prices and the lack of subsidised player tickets) was one of support and encouragement.

Cheltenham may not be the most atmospheric banding venue, but its size and layout make it ideal for the occasion.

The stature of the event was not diminished despite the reduction in competitive numbers.

The investment made gave things a much more polished overall presentation.

Dave Hayward was excellent as usual as compere – leading a touching tribute at the end of each section in memory of those lost to the movement in the Covid-19 pandemic, with Ali Woodman using his technical wizardry to great effect on the multi-media screen.

The stature of the event was not diminished despite the reduction in competitive numbers.

It was a success, but one that needs to be built on further.

Kapitol says it will listen to both concerns and opinions, suggestions and ideas from any source. 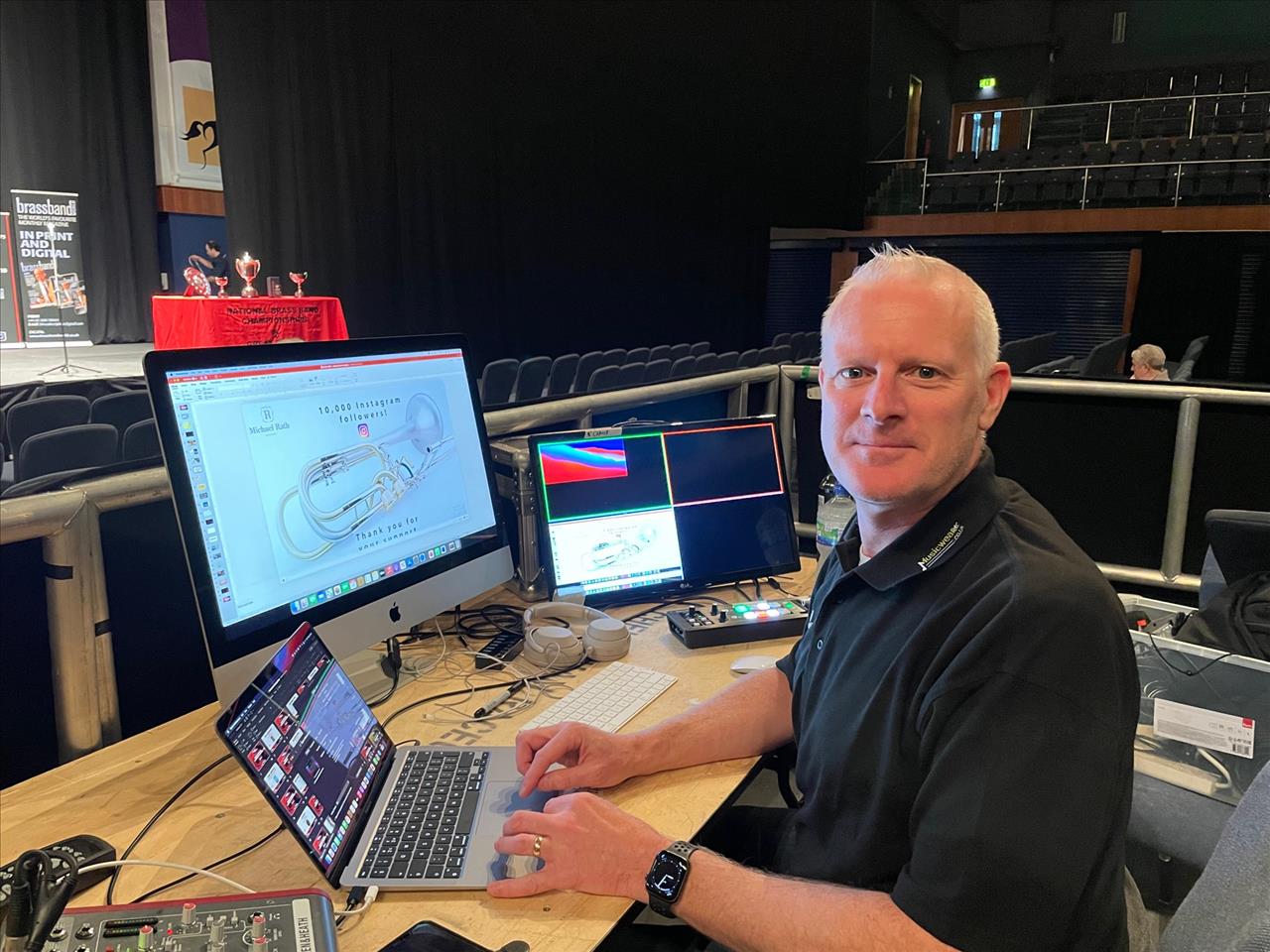 Multi-media man: Ali Woodman haad all the graphics at his fingertips

It has already meant that the announcement of the 2022 Area test-pieces was met with general approval, and it could also mean that well informed arguments about the need for re-grading, fewer bands at the finals (and the day was compact and energised as a result this year) and registration requirements will at least be considered.

Could those opinions for debate then come from Brass Bands England? And if they do, will they at least be discussed?

In return, will BBE take on board any suggestions Kapitol would like to make about how their event can be supported in return without any interference in the way in which it is then run?

If an entante cordial can be reached, then there is real hope that a thaw can set in, and cooperation rather than conflict can herald a brighter future for everyone concerned.

The past 18 months has seen both Kapitol and BBE work hard to prepare for the post Covid-19 future, although their long terms strategies for development, prosperity and success seem at present to be diametric opposites.

If an entante cordial can be reached, then there is real hope that a thaw can set in, and cooperation rather than conflict can herald a brighter future for everyone concerned.

Bands do not want to be stuck in the trenches for another year or more whilst no one is prepared to at least speak to each other.