Kingdom Brass, Annan Town and Langholm Silver will each make round trips of over 500 miles to try and return home with National titles. 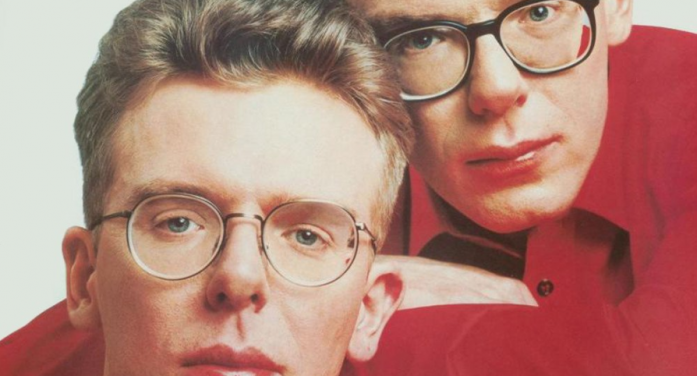 Although Scotland has only three bands at the National Finals at Cheltenham on the weekend, each is ‘gonna be’ racking up well over 500 miles in travel in the hope of returning home with podium silverware to their name.

Never mind 'Sunshine on Leith' by The Proclaimers - all three will travel south looking for at least a few rays of prize-winning fortune to shine on them from the adjudicator's tent.

First Section Kingdom Brass, Second Section representatives Annan Town and Langholm Town in the Third Section have all been putting in extra hours of rehearsals over the last few weeks since lockdown restrictions were eased in the country.

Never mind 'Sunshine on Leith' by The Proclaimers - all three will travel south looking for at least a few rays of prize-winning fortune to shine on them from the adjudicator's tent.

However, for very understandable reasons, it will be the fewest number of Scottish representatives for well over 50 years that will have their names written in the National Final programme. 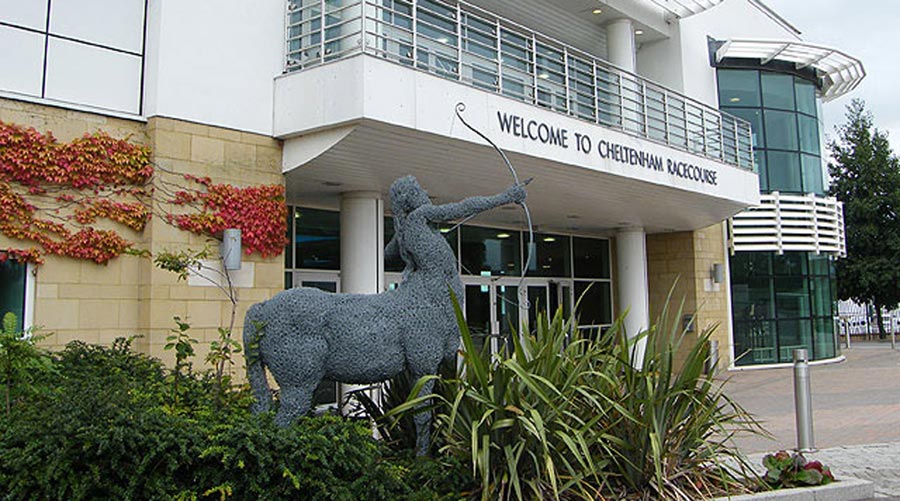 Cheltenham and back is well over 500 miles for each band

That though won’t stop this particular trio for heading south with the scent of another famous victory or two on their minds after something of a Scottish banding renaissance at the event in recent years – including victories for Newmains & District in the Fourth Section in 2017 and First Section Unison Kinneil in 2019.

Langholm led by MD, Chris Shanks will be the first to take to the stage on Saturday, playing  ‘Kaleidoscope’  by Philip Sparke, and having been boosted by a recent return to their own rehearsal facilities.

It’s the band’s third National Final appearance and as their Secretary, Christine Calvert told 4BR, they were determined to make it despite the lengthy lay-off.

“Following qualification in 2020 we were determined to go and, after a year’s delay, we have prepared as best we can, ensuring the band remained safe by providing sanitisers and following the guidelines within our risk assessment.” 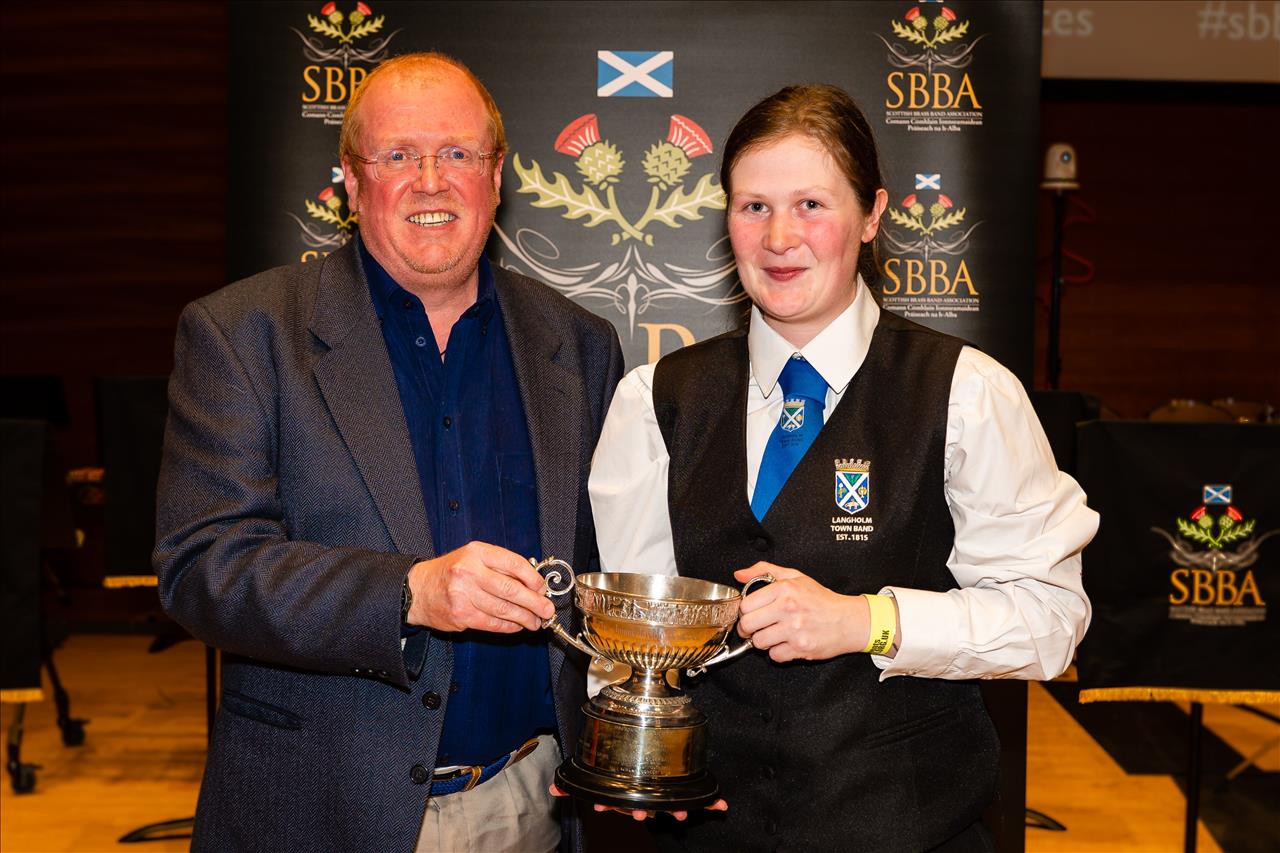 Back to prize winning business for Langholm?

The band returned to rehearsal after a mammoth 440 day break – first in the spectator stand at their local rugby club and then a disused warehouse, before being able to return to their ‘home’.

Christine added: “The Stevenson Trust kindly allowed us to rehearse in this spacious accommodation during our build-up to the Nationals. The building was ideal with a large area allowing us to be suitably distanced to comply with guidance for brass playing.

Local businesses and individual supporters have been exceptionally generous – as is always the case – and the band is grateful to all who have contributed to make the trip to Cheltenham possible.

Without this local support the band could not have attended due to the lack of fundraising opportunities over the last 18 months.” 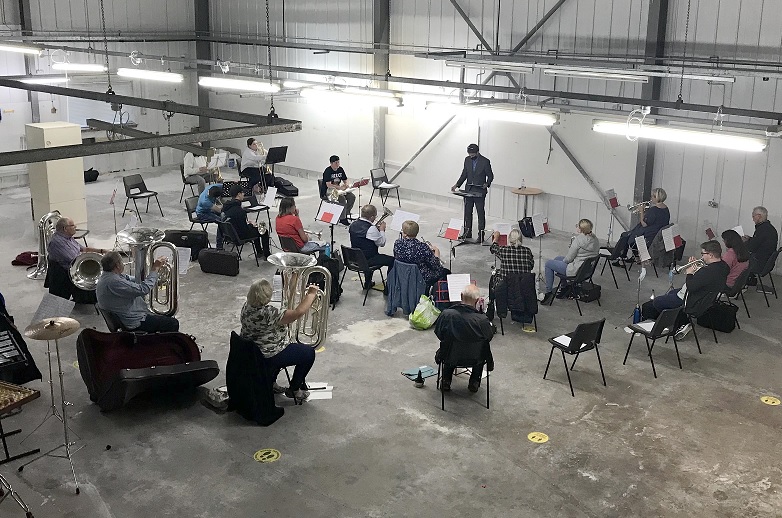 Rehearsals have been held in some very different locations...

Langholm contains players aged between 17 and 81 and prides itself on being a true community band. Players work in a variety of settings including some who provide primary care and education and have been on the front line throughout the pandemic.

Langholm contains players aged between 17 and 81 and prides itself on being a true community band. Players work in a variety of settings including some who provide primary care and education and have been on the front line throughout the pandemic.

Christine added: “We are all excited to be able to get our chance to go to Cheltenham, but we are still very aware about the challenges Covid-19 poses.  The organisers have provided details of how they will be keeping band’s safe and we have also added in our own extra measures.”

First Section Scottish hopes rest on the shoulders of Kingdom Brass, who link up once more with Tredegar MD, Ian Porthouse to spearhead their challenge.

They take to the stage on Saturday afternoon performing Edward Gregson’s classic test-piece,  ‘Connotations’, and come well prepared as they have been in the fortunate position of being able to rehearse since the end of April. 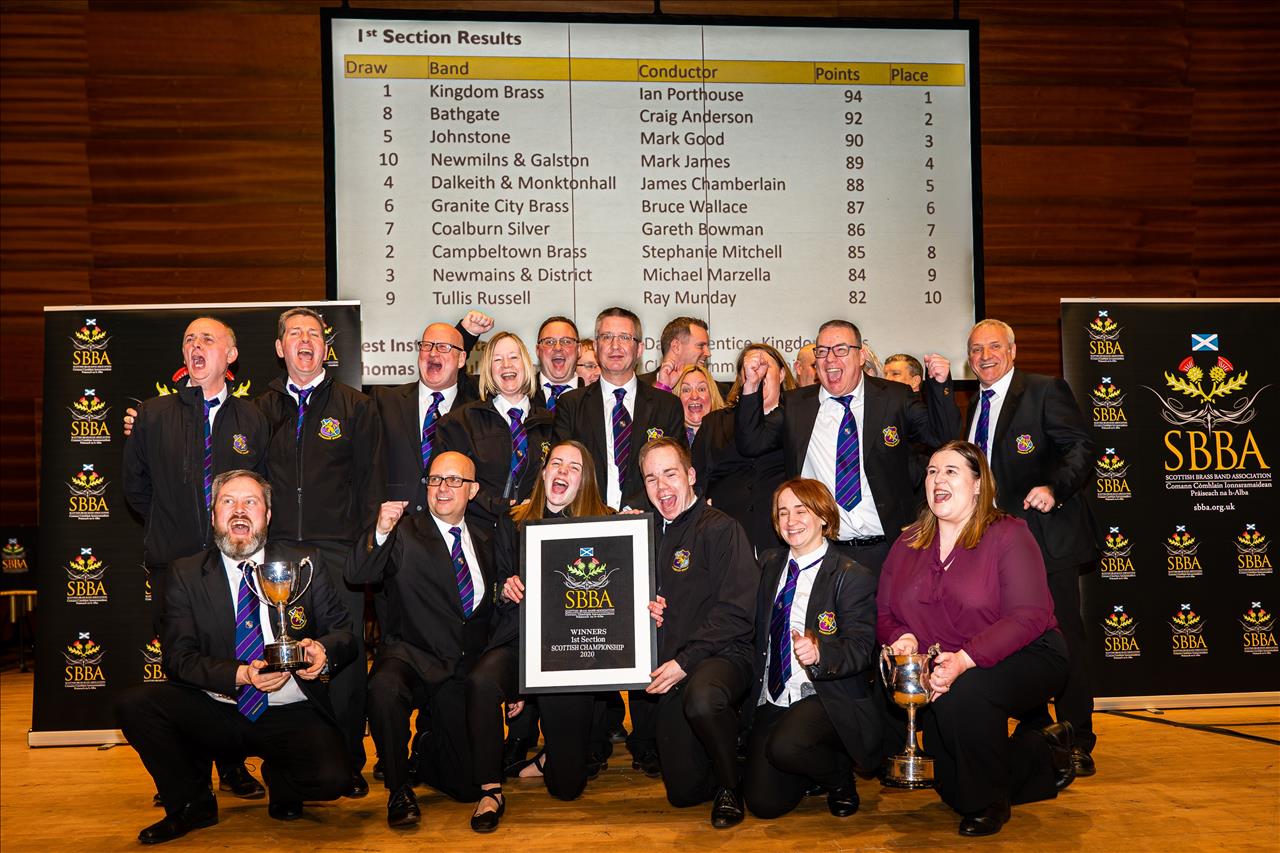 Looking to be number 1 again? Kingdom won the Scottish title off Kelly's Eye

That began outdoors with six socially distanced players at Cowdenbeath football club’s ground, before gradually building up to two groups of six until restrictions on numbers were completely lifted.

“It had been 410 days since we had last played together in winning the Scottish title in Perth in March 2020.

That in mind we ensured we contacted Fife Council to get their definitive legal interpretation of the Covid-19 relaxations so that we could stay within the rules,” Kingdom Secretary, John Todd told 4BR.

“It had been 410 days since we had last played together in winning the Scottish title in Perth in March 2020. 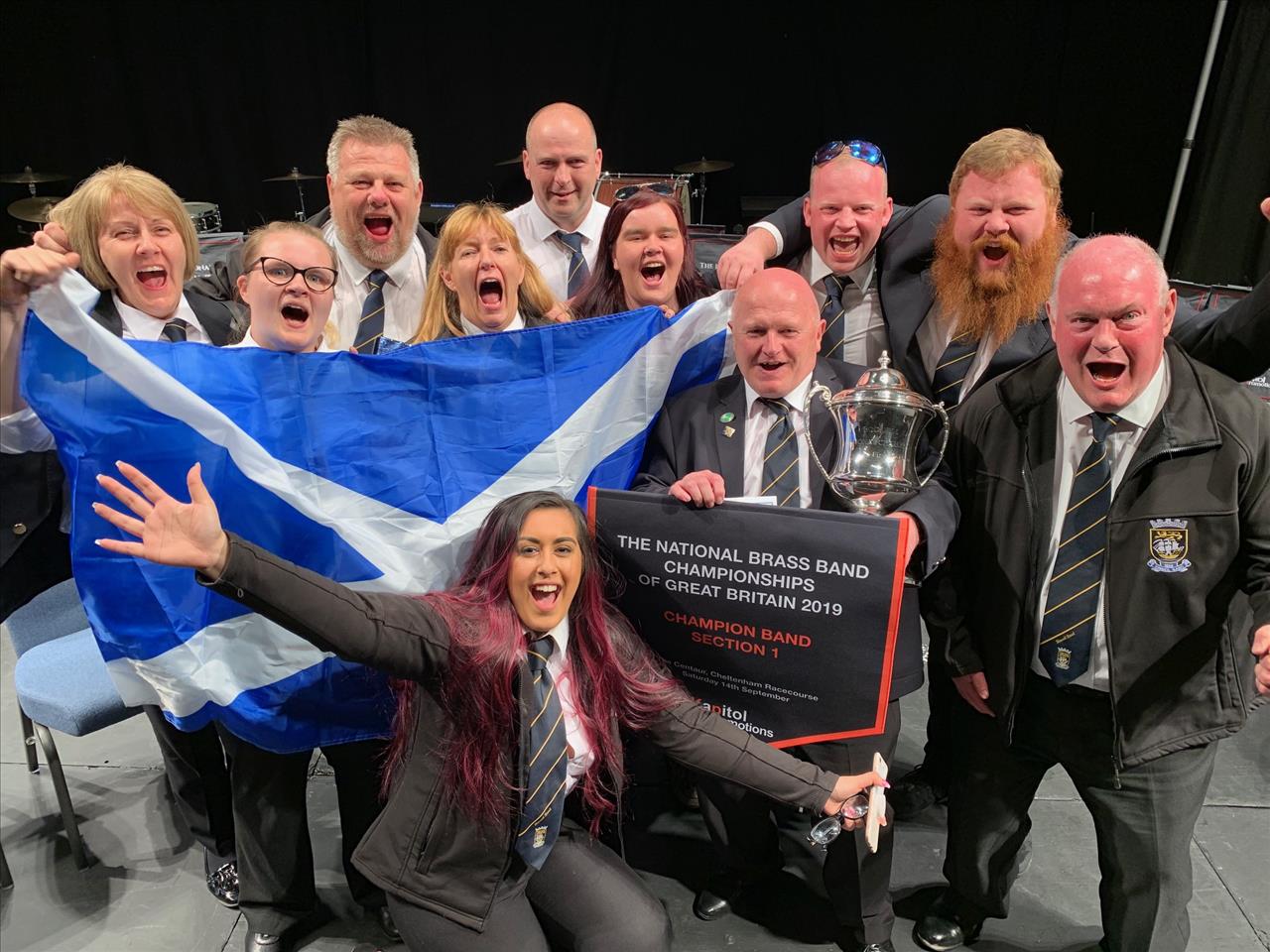 The band has been back in its own bandhall in Kelty since June, observing Covid-19 protocols for safety. The band has also been fortunate that the modern premises has an up-to-date ventilation system, giving extra peace of mind as Ian Porthouse has made his regular trips up from Wales. 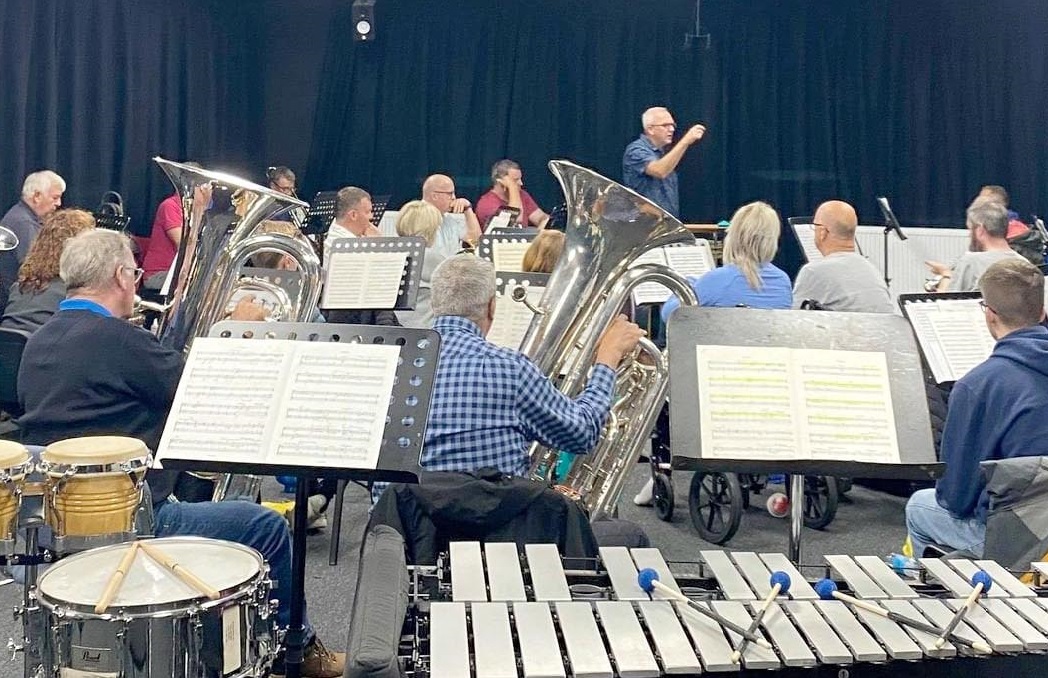 He will lead the band with resident conductor Paul Drury adding extra experience by taking his place in the tuba section as they aim to emulate Unison Kinneil who claimed victory in Cheltenham in 2019.

“We’ve enjoyed a great run-up the contest getting full rehearsals,” John added. “We’ve also undertaken a couple of outdoor engagements at St Andrews and in Kelty so our stamina is good and Ian is happy with our progress.”

The Scottish Lions of Annan

Meanwhile, Annan Town will have to wait until Sunday to take to the stage, as the Scottish Second Section Champion tackles Thierry Deleruyelle’s descriptive set-work,  ‘Lions of Legends’  under MD, Andrew Warriner.

After 18 months of contesting hibernation, little surprise then that they too are looking forward to making their appearance, especially as that Perth victory capped a wonderful period of success - including the trip to represent Scotland in the Challenge Section of the 2019 European Championships in Switzerland. 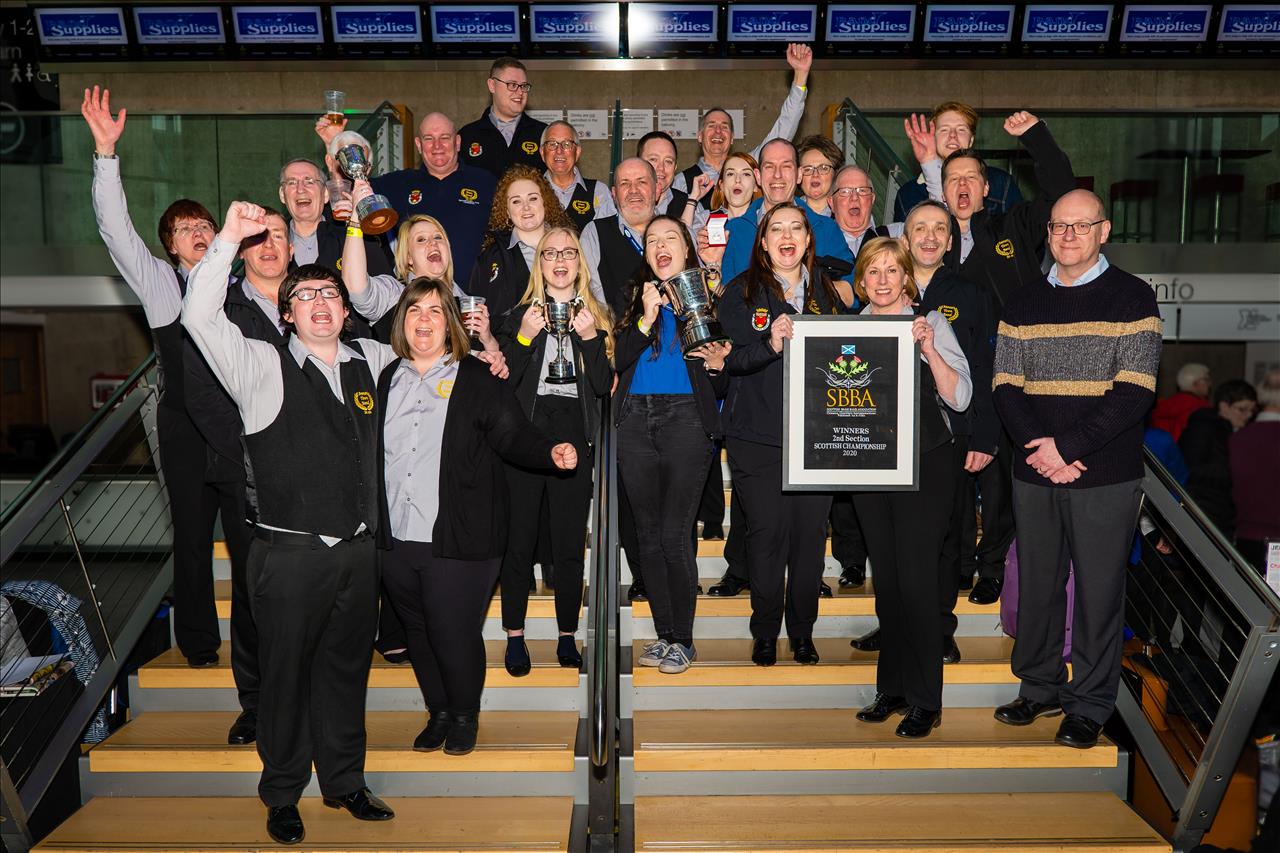 Hopefully Annan will be giving another roar of success in Cheltenham

“Rehearsals have gone really well, albeit still with restrictions. Given the challenges over the past 18 months though the commitment, determination and enthusiasm has been absolutely fantastic and we can’t wait to perform on the contest stage once again.”

“Rehearsals have gone really well, albeit still with restrictions. Given the challenges over the past 18 months though the commitment, determination and enthusiasm has been absolutely fantastic and we can’t wait to perform on the contest stage once again.”

Samantha revealed that Resident Conductor Simon Railton and MD Andrew Warriner have been working the band hard on the test piece, even though due to space limitations, they have not been able to use their regular rehearsal room in the town’s Blue Bell Inn. 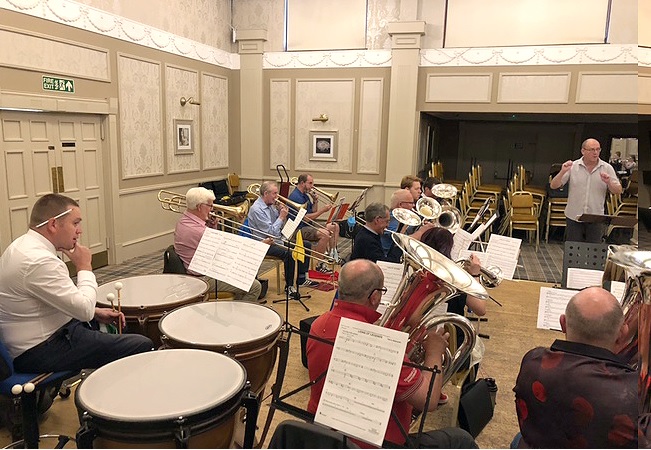 Ready to make notes: Every player is making sure they know what the MD wants...

Instead they have been grateful to the United Reform Church in Annan, the committee of Brydekirk Village Hall and the local Corner House hotel for helping out with practice facilities.

“Our progress on the test piece would not have been possible without their assistance and we’re extremely grateful to them all for showing such community support,” added Samantha.

“We would also like to thank the Hollywood Trust and Tesco Groundwork who have awarded us grant funding to help us attend the National Finals.” 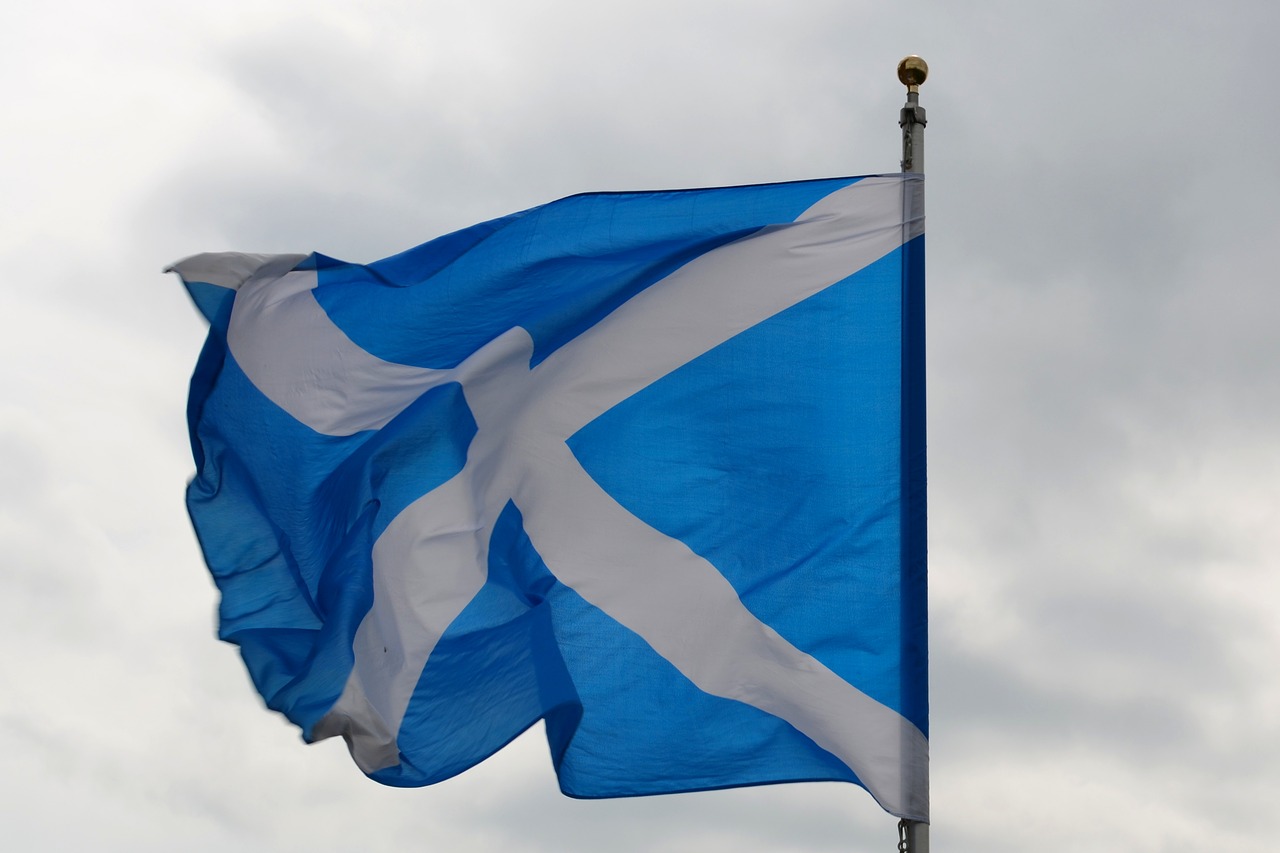 All three bands will proudly fly the Scottish Saltire in Cheltenham on the weekend – and to once borrow a phrase from the famous Proclaimers pop song, there will be little doubt that if they their efforts pay off then they will enjoy a celebratory drink or two.

You don’t undertake a round trip of well over 500 miles on a weekend unless you are ‘gonna’ enjoy the experience in full after an 18 month break.