There may not have been any National Championship at the Albert Hall this year, but when it does return will it make the same media impression the 1945 event did? 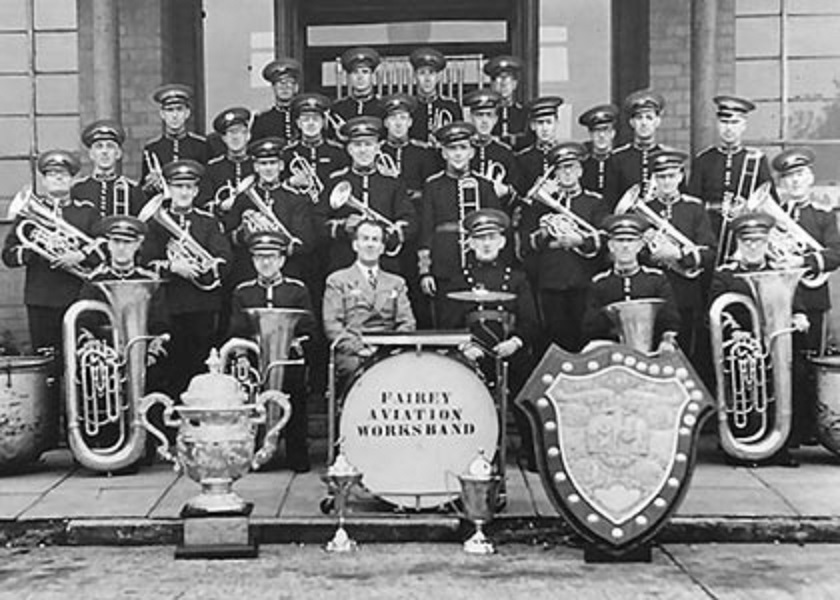 Although there was no National Brass Band Championship final at the Royal Albert Hall in London to enjoy last weekend, it is worth remembering that it wasn’t the first time that the event hasn't taken place.

And, that after both extistential moments of crisis in the nation's history had been overcome, the contest returned - and to widespread national media coverage.

Just before the 1945 competition of 17 bands, the music critic, H.G. Sear of the patriotic ‘John Bull’ magazine appealed for wider recognition of the event – one which he said contained bands that “...have developed a skill which, when all is considered, is scarcely surpassed by the greatest orchestras.”

And whilst he did also say that, “...here is magnificent music through which simple men have made master works available to millions”, he did add with a rallying cry: “Our country must foster this great folk art. With the forward march of democracy let us see the Brass Band enter its Golden Age.” 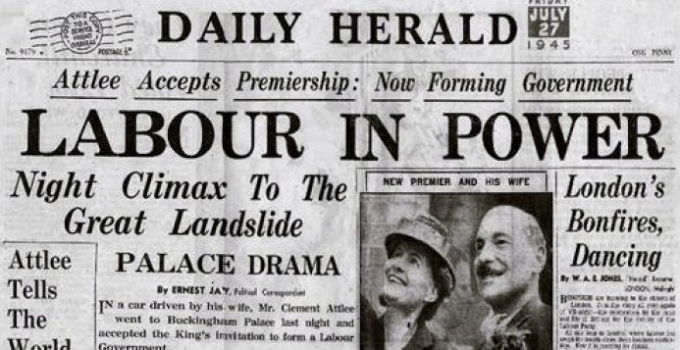 The Daily Herald was published from 1912 to 1964 - eventually becoming The Sun.

That said, the 1945 contest was reported by the Daily Herald sponsors with what could be politely called enthusiastic, if misinformed support under the post-contest heading on Monday 8th October of; “Champion Band had Damaged Trumpets.”

The by-line may have been the work of a sub-editor in search of an eye catching title (the paper did eventually become 'The Sun'), rather than the journalist Ray Sonin, but it was on page 3 before other things caught the eye in later years...

However, you still wonder just how much research he put into establishing the accuracy of his own opening line of; “Twenty five fitters and machine inspectors in an aircraft factory beat 25 coal-miners in the Daily Herald National Brass Band Championship Festival at the Albert Hall, London, Saturday.”

However, you still wonder just how much research he put into establishing the accuracy of his own opening line of; “Twenty five fitters and machine inspectors in an aircraft factory beat 25 coal-miners in the Daily Herald National Brass Band Championship Festival at the Albert Hall, London, Saturday.”

Of the contest he reported; “Seventeen of Britain’s finest bands - winners of the nation-wide series of Area Contests held under the auspices of the ‘Daily Herald’ this year - battled to give the best performance of the specially composed test piece - Denis Wright’s ‘Overture for An Epic Occasion’."

He wrote that the standard, "...was very high, a credit to those amateur musicians" who, in quoting the words of the Labour Peer, Lord Southwood at the evening prize-giving, “… in spite of their long, laborious hours in pit and factory, in mill and workshop, find time in some miraculous way to continue their practice and to make us forget our cares and worries for a while by the magic of their music.”

Before that climax the contest had also marked the first time that the “ballot” for the order of play was undertaken in public – taking place on the stage, as the Daily Herald reported, “in full view of the audience.”

And such was the demand for tickets that even the Levan Mail newspaper in Scotland stated that “interest in this championship has proved phenomenal”.

It said, “Every reserved seat for the National Brass Band Championships Festival… for both the afternoon contest and evening concert has already been sold. Applications have been received for more than double the number are still pouring in.” 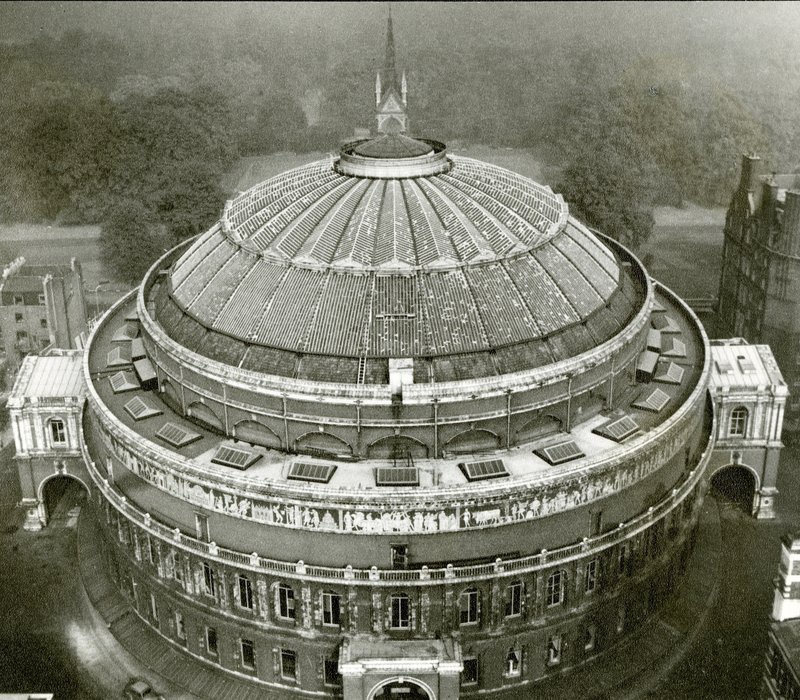 The Royal Albert Hall survived the War with little damage

It was fortunate then that the contest took place for the first time at the Royal Albert Hall - seating close to 6,000 people. It suffered very little damage in the War - mainly due to it being such a recognisable navigation aid to both allied and enemy bombers.

Three bombs did shatter external windows in 1940 but by the time the contest took place in October 1945 only minor repair works was needed to enable it to hold the event.

However, what many people who took to their seats didn’t know was that Dr Denis Wright who wrote the test piece 'Overture to an Epic Occasion'  had in fact a very personal connection to what he said was a “proud thanksgiving” celebration of the overthrow of Nazidom as was written in the contest programme (a postwar austerity 4 pages costing sixpence). 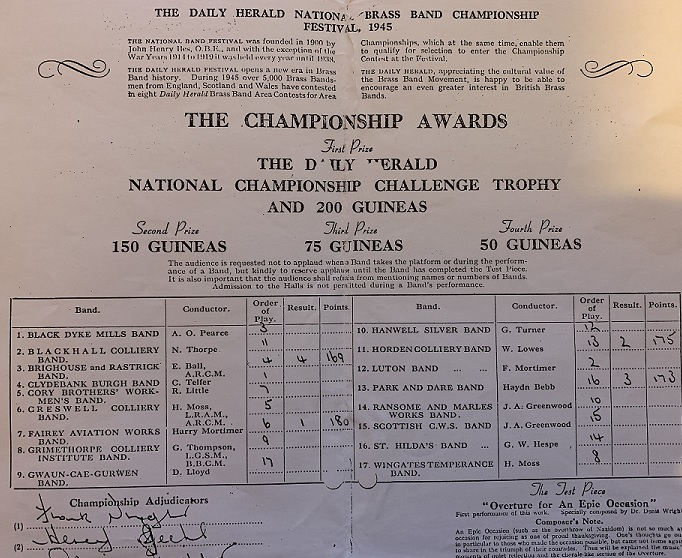 The sixpence programme gave the contest details in austerity fashion

In a small article hidden away in the Daily Herald newspaper just before the contest, it was revealed that in 1941 Dr Wright’s mother and father “were made prisoners at sea by a German raider”  and had “endured many months of harsh captivity before being released.”

just before the contest, it was revealed that in 1941 Dr Wright’s mother and father “were made prisoners at sea by a German raider” and had “endured many months of harsh captivity before being released.”

It must therefore have been a peculiar emotional experience as he sat in the adjudicator’s box listening to the 17 bands alongside Frank Wright and Henry Geehl.

In the end they picked Fairey Aviation Works under Harry Mortimer as the clear winner (by 5 points), claiming the title and the new National Championship trophy plus 200 guineas prize money from Horden Colliery from County Durham, with Parc & Dare from Wales in third. 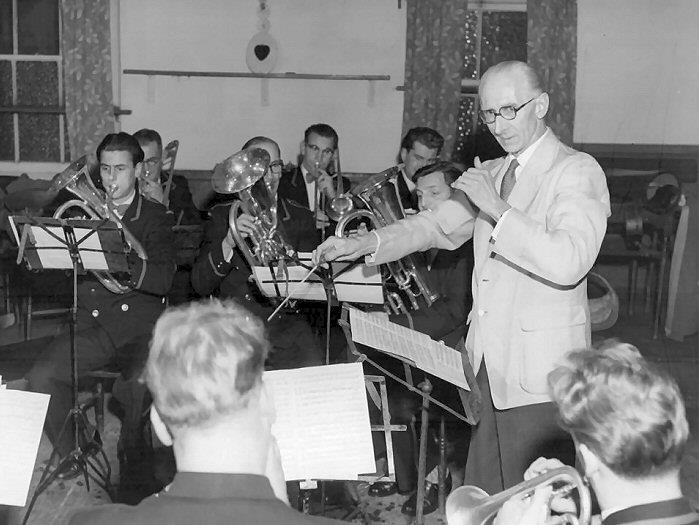 It was Fairey's first National success, although perhaps no real great surprise.

As the Second World War had ended in Europe in the May and in the Far East in August 1945, Fairey had come to the contest unhindered by full time aircraft production (the players were in protected occupations during the War) or the increasing demands placed on the coal industry to meet winter production targets.

They had won the British Open in September (their fourth in five years) and had just returned the week before the contest from a five week tour of Holland, Belgium and Germany – although given the circumstances so soon after Germany’s surrender it would not have been a particularly comfortable experience.

All the more so as during their time in Germany it was reported that the lorry containing their instruments caught fire.

The Daily Herald reported: “The instruments were saved, but some had been singed and damaged. It was with these that Fairey’s played on Saturday - and won.

Fairey’s success was great occasion for the conductor, Harry Mortimer. He has been suffering from a strained right shoulder and poisoned foot, and conducted in great pain and under great difficulty.”

The Daily Herald reported: “The instruments were saved, but some had been singed and damaged. It was with these that Fairey’s played on Saturday - and won.

He must have felt a great deal better on receiving the trophy, whilst Lord Southwood who presented him with the great silver cup told the Daily Herald, “I want to say it is our intention to everything in our power to advance the cause of the brass bands and their players.”

Cable from the owner

Meanwhile, the Daily Herald even caught up with Sir Richard Fairey, the company owner.

He received the news of his band’s win whilst visiting Bermuda, and cabled the bandmaster Mr Elgar Clayton: “Sincere and heartiest congratulations to you and every member of the band on your well merited success.”

It went on to say that the band enjoyed a special celebration on the Friday following the victory: As 1945 'Double Champion' they certainly did.

In the years that followed they won the title again in 1952, 1954 and 1956 - but none was perhaps as important or well reported as the first.