A decade of conducting inspiration...
Allan Withington reflects for 10

Allan Withington reflects on 10 years of his celebrated conducting course — just before he heads to his next musical destination. 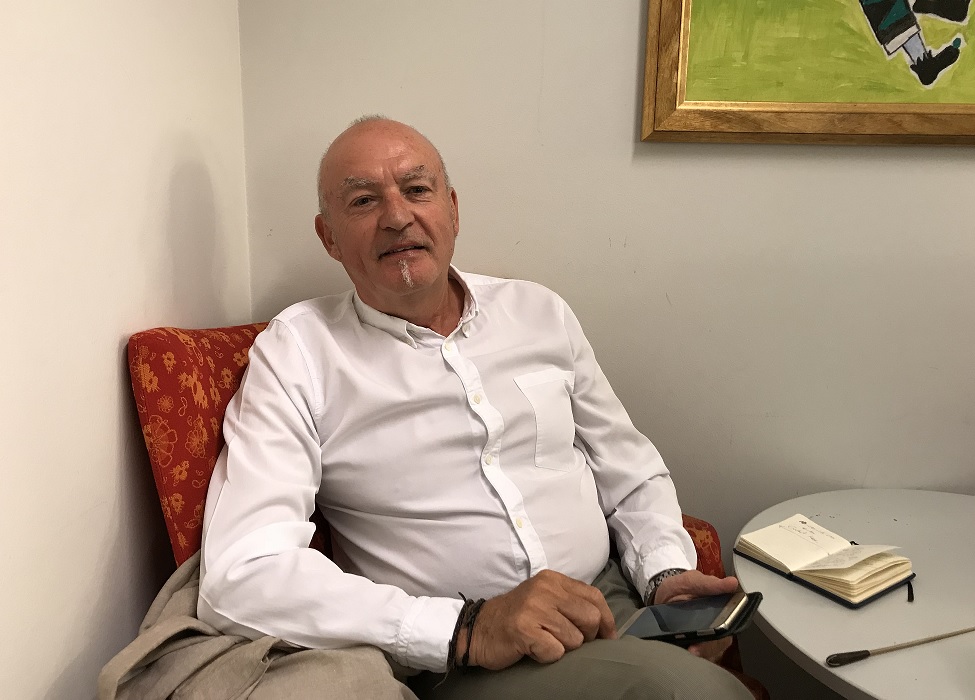 Ready to pass the baton... Allan Withington in relaxed mood...

Allan Withington continues to be the inspirational standard bearer for the next generation of brass band conducting talent.

It’s hard to think of another conductor of his stature who so passionately invests his energies in those who he hopes will hopefully follow in his footsteps.

A decade after his first summer school course he continues to mould the raw materials of musical direction fuelled by an insatiable appetite for innovation and inventiveness.

This has seen him work with fashion designers and chefs, alongside rhetoricians and graffiti artists, next to waterways and even behind the bars of prisons to make his annual conducting course the most sought after of its kind in the world.

Delegates leave invigorated, inspired - and knackered. It is however an overwhelmingly positive musical experience for all involved.

Sat on the train from Amsterdam to Paris, it’s little wonder he himself looks whacked after six days of commitment and intensity.

“That was a fantastic course,” he says as he looks out of the window of the train as its heads into the French capital - the first leg of a journey that will eventually lead him back to the pretty French village of Monflanquin in the Lot-et-Garonne area of south west France where he has a home.

“The planning starts here for next year though. The creative ideas are always bubbling away - many coming from talking to the different delegate conductors themselves.

Seeing how they work and respond to the different stimuli we give them is fascinating. There are always new ways we can all develop as conductors.” 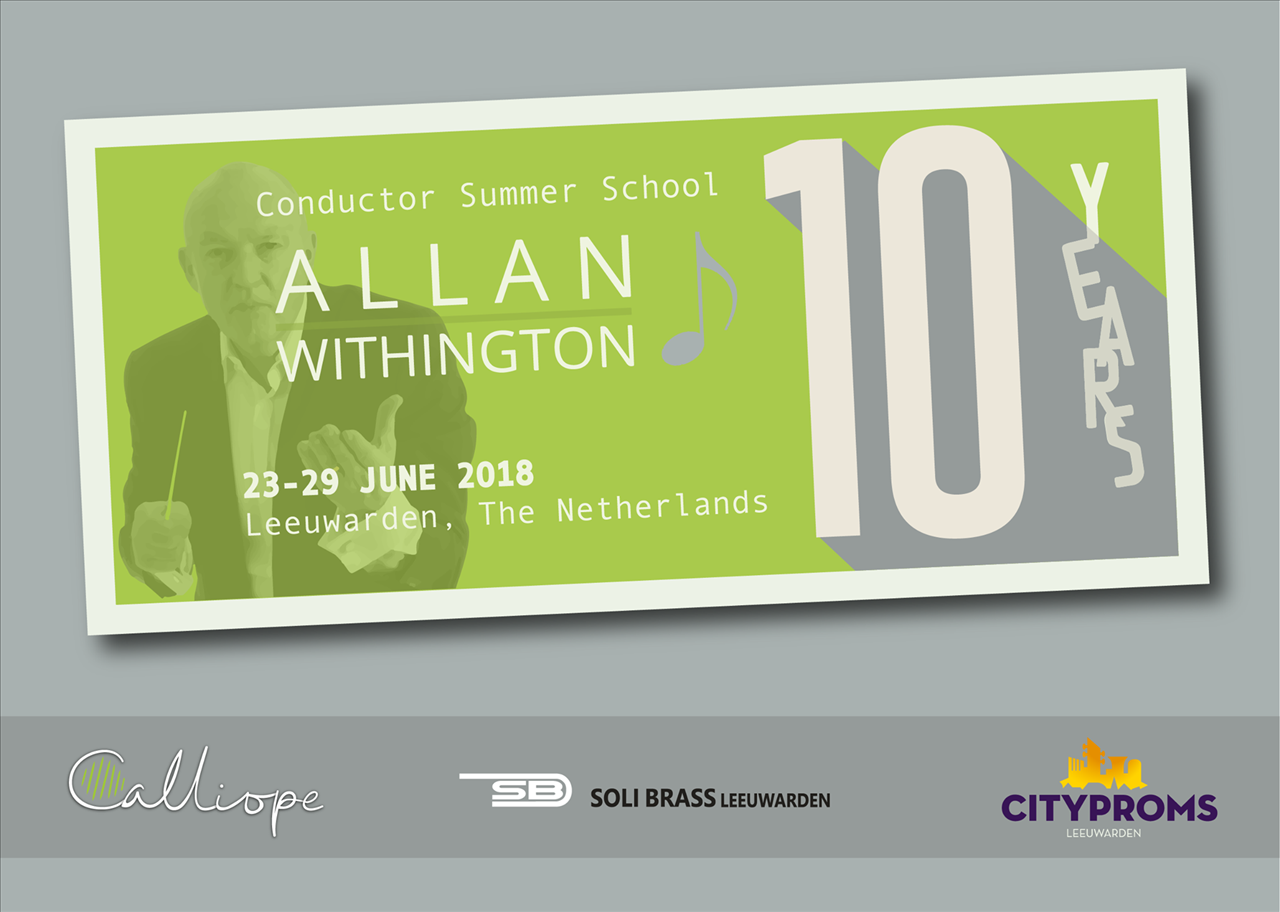 His thematic approach - such as music based on food or freedom, or in honour of this year’s course anniversary, the number 10, may sound prescribed, but the underlying ethos means that it is anything but.

Allan seeks to provide a blank canvas on which the aspiring delegates create their own, identifiable individual styles of conducting.

“That’s always been the key,” he says.

“We want to help unleash confidence and creativity. We must have a foundation of solid technique and musical rigour, but they must never compromise the ability to interpret and enjoy the making of music – to expand horizon and break existing boundaries. That’s what I always set out to achieve as we start every course.”

Looking back over the past decade, Allan is quick to thank those who have worked with him such as Soli Brass from Leeuwarden, Mette Hojen, Robin Dewhurst and the indefatigable Anja Abma, who has her own theory to why the courses have been such a lasting success story.

It’s why we’ve had conductors from just about every European country and as far afield as Australia and even Zimbabwe.  Music is the one true international language - and on Allan’s course everyone speaks it

“The opportunity to work and learn with Allan is one that engages conductors starting out on a hobby to those who wish to improve their professional level skills.

It’s that diversity that makes it so special, and even 10 years after the first delegates came to us, Allan keeps in touch to ensure the skills learnt are always being developed further.”

She adds: “It’s why we’ve had conductors from just about every European country and as far afield as Australia and even Zimbabwe.  Music is the one true international language - and on Allan’s course everyone speaks it.” 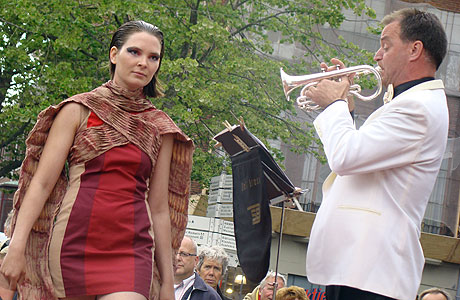 Fashion stakes: Allan has worked with student fashion designers on his course

Allan emphasises the point further as the train slows into Paris.

“This year we had 10 student delegates from 8 different European countries – all different ages (18 - 71 this year) and abilities, each from a different musical background and culture: At the end of the course though we were as one.”

He adds: “I think an essential part of that has been the inclusion over the years of guests from all walks of artistic life, and my thanks go to them for being so inspirational.  They have been the key to expanding those musical horizons.”

This year, they included conductor Ivan Meylemans, as the delegates worked with the renowned fanfare band Oranje Grootegast, a concert visit by Youth Brass 2000 from the UK, classes from a yoga specialist Panda van Proosdij to help with posture, and sessions with Marcella Veldhuis on how conductors present themselves to an audience.

I think an essential part of that has been the inclusion over the years of guests from all walks of artistic life, and my thanks go to them for being so inspirational.  They have been the key to expanding those musical horizons. 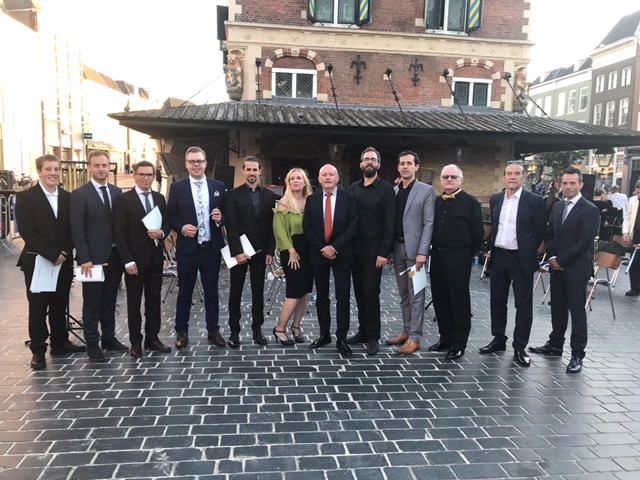 The climax to the annual course is the concert performance that takes place in the heart of Leeuwarden, which this year celebrated being the 2018 European City of Culture.

The talented Soli Brass, a high class vehicle to work with for any aspiring conductor, was a sympathetic ensemble to instil confidence in nervous conductors as they each took their turn at the rostrum to conduct a piece, whilst during an earlier lunch time concert during the week the band linked up with a young choir made up entirely of refugees.

“That was a memorable experience,” Allan says. “Speaking to teenagers from Syria, Congo, Afghanistan and Iraq, who have been made welcome in The Netherlands over the last few months and years touched everyone.

They had learned the text to a Frisian song composed by Sytze Pruiksma and to see their faces and to hear the warmth of the reception it received has been one of the highlights of the past decade of the course.

It spoke of the necessity of integration and the absolute power of making music together.”

Speaking to teenagers from Syria, Congo, Afghanistan and Iraq, who have been made welcome in The Netherlands over the last few months and years touched everyone 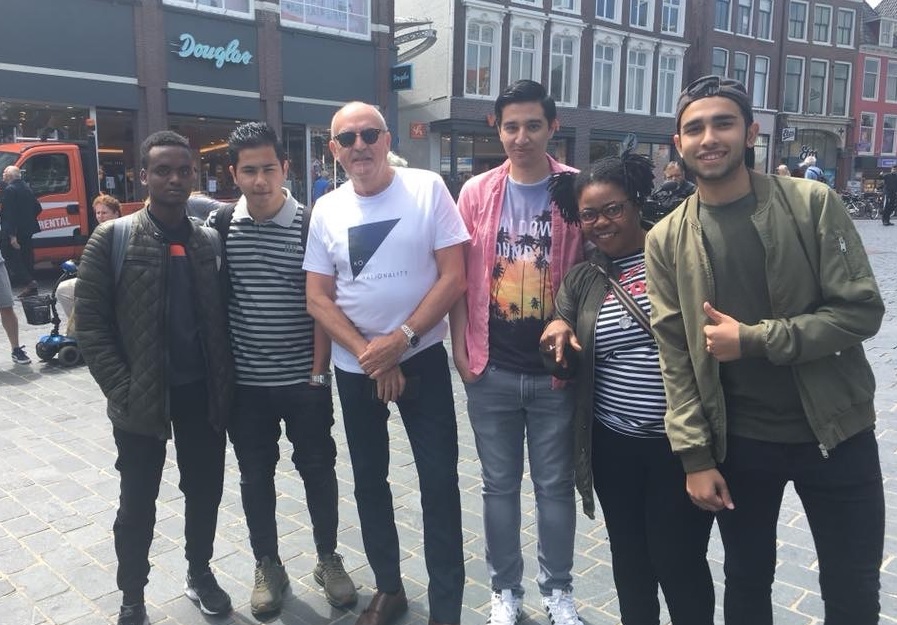 Integration: Teenage refugees played a part in this year's course

So how was the experience for those who attended this year?

Sérgio Condessa from Portugal certainly found it inspirational: “It was such a wonderful experience in a high level brass band environment. Allan shared his knowledge with us in a very humble way, trying to help to solve problems and encouraging us to innovate and daring us to do new things.”

“It’s so impressive how Allan approaches everyone on their own level, making everybody equal,” Dutch conductor Olav Dorst adds. “Soli Brass also helps so much by giving immediate feedback. It’s a very nice way to gain experience and improve.”

“It’s so impressive how Allan approaches everyone on their own level, making everybody equal,” Dutch conductor Olav Dorst

That was the essence for Daniel McLaughlin from the UK: “I had a fantastic time and took so much out of the course. For me, the best thing was that it wasn’t just about conducting a band: It was the whole package - the overall impression you present as a conductor - from baton technique to how you walk onto a concert platform.

Apart from refining my conducting technique, I felt my musicianship progressed greatly. Under Allan’s guidance, I learnt so much about the interpretation of music and the level of musicality that can be attained.” 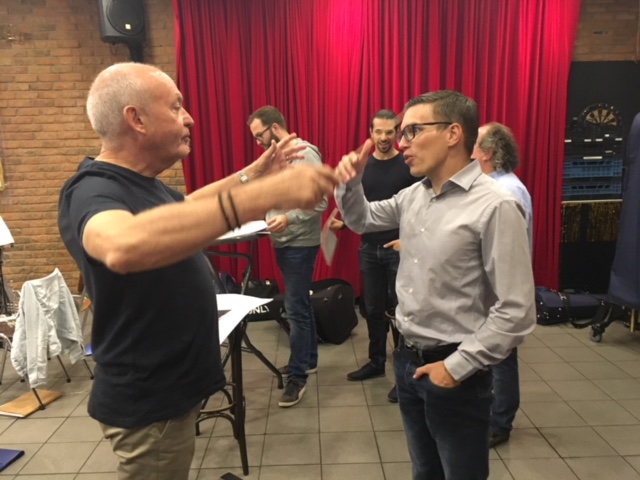 Discussing the details is an essential part of Allan's approach

Meanwhile, the oldest delegate, 71 year old Christer Aberg found the course offered him a new approach to his conducting hobby: “I’ve attended many workshops and masterclasses over the years and Allan was, by far, the best of them all, because there is so much variety and invention about the way he goes about things.”

And as for a young conductor and musician who has already performed alongside some of the world’s finest bands and conductors?

“There was something to keep you engaged at all times,” euphonium star Glenn Van Looy says. “I came away a better conductor and musician. I couldn’t have asked for anything more.” 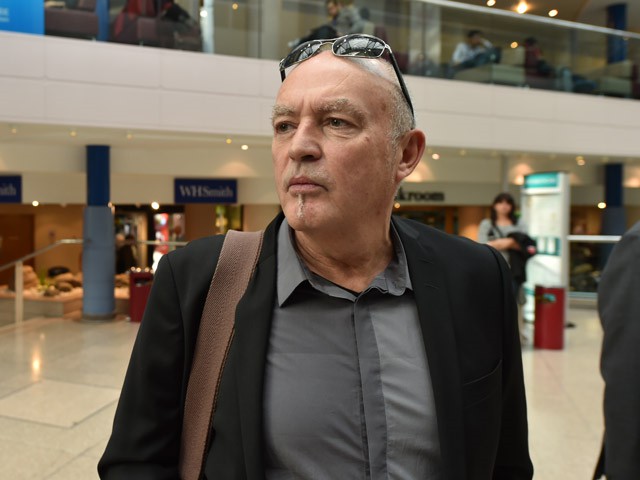 Where next for the future?

On the platform and looking up at the board to find out when the train to his next musical destination arrives, Allan reflected for a moment on a decade of inspiring conducting talent.

“I’m a lucky man to do what I love for a living - and a lucky man to have worked with so many musicians and people who share my passion for music making.

After 10 years, I think we may be onto something with this conducting course.”