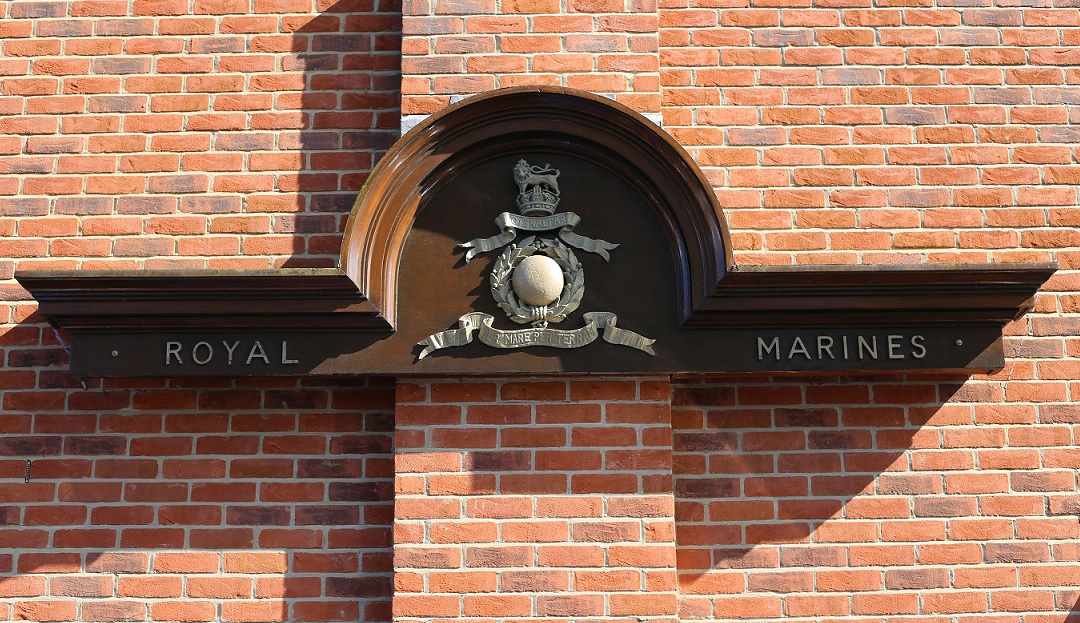 The relative peace and quiet of a Saturday morning on HMS Nelson, Portsmouth was unapologetically disturbed by the musical sounds of slides and valves being oiled, cases being slammed shut and stands being knocked over at the start of what proved to be a highly successful Low Brass Day led by the Royal Marines School of Music.

Low brass players came be sea and by land (as per the Royal Marines motto 'Per Mare, Per Terram') from all over the southern half of the country came to the evocative setting for a day of performance, learning and discussing all things related to the trombone, euphonium or tuba.

After the early start many had had to make to arrive in time, nothing would have been possible without a cup of coffee, before the delegates were briefed to warm up for what promised to be a fantastic day of music making.

In these days of health and safety requirements there was even the offer of ear protection – a sensible freebie given that under the baton of Director of Music Training, Major Pete Curtis MBE, the massed ensemble of 115 players certainly made a big enough musical sound - one that even the horn on the Navy’s new aircraft carrier, HMS Queen Elizabeth would have struggled to compete against.

‘76 Trombones’ provided the fun, lip-buzzing start to the day, before moving onto Bizet’s ‘Intermezzo’ from ‘L’Arlisienne’, followed by a deserved break to hear the first of the guest artists, Simon Minshall.

the massed ensemble of 115 players certainly made a big enough musical sound - one that even the horn on the Navy’s new aircraft carrier, HMS Queen Elizabeth would have struggled to compete against. 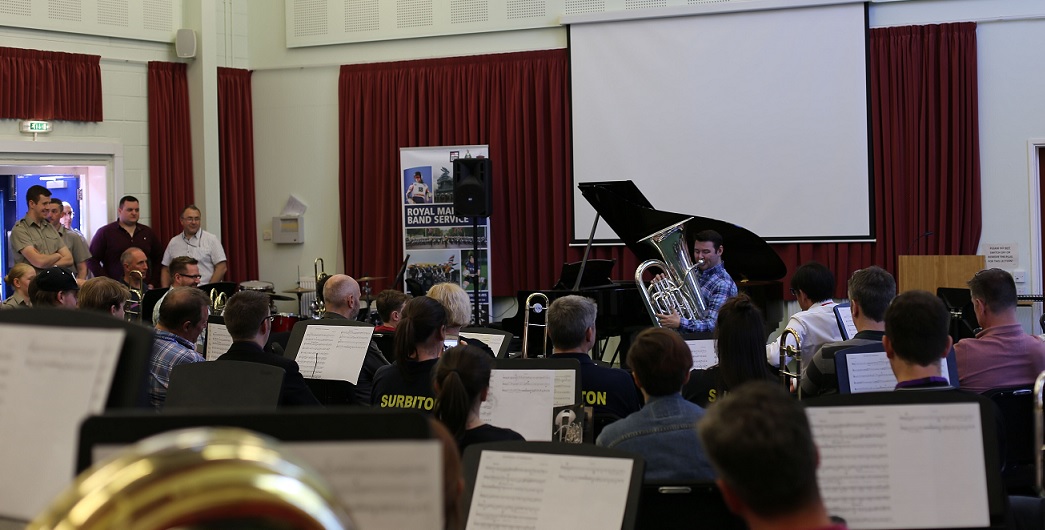 Les Neish was one of the masterclass tutors

Simon gave a fascinating masterclass on bass and contrabass trombone playing, and in particular their use within Wagner’s ‘Der Ring des Nibelungen’ (The Ring Cycle).

With an audience of mixed abilities and experience it might, on the face of it, seemed have been a very serious topic and one which might have alienated some of the attendees: However, nothing could have been further from the truth.

Simon’s enthusiasm, along with his amazing playing on both instruments had the audience in the palm of his hand – a fact that was clearly demonstrated with the number of players investigating the cost of buying a contra bass trombone for themselves at the trade stands as soon as his masterclass had finished!

As one player commented in the Q & A session; “You seem to have a lung capacity that the rest of us mere mortals don’t!”

His engrossing masterclass focussed on developing aural skills as well as technical ones to give insight and understanding of the art of improvisation.

Along with a trio made up of Royal Marines musicians, Robbie gave a short recital of some genre standards, demonstrating why he is one of the most in-demand jazz trombonists in the country.

His engrossing masterclass focussed on developing aural skills as well as technical ones to give insight and understanding of the art of improvisation.

It was thoroughly illuminating demonstration on a musical skill set that can at times be very daunting for those who would love to explore jazz playing. 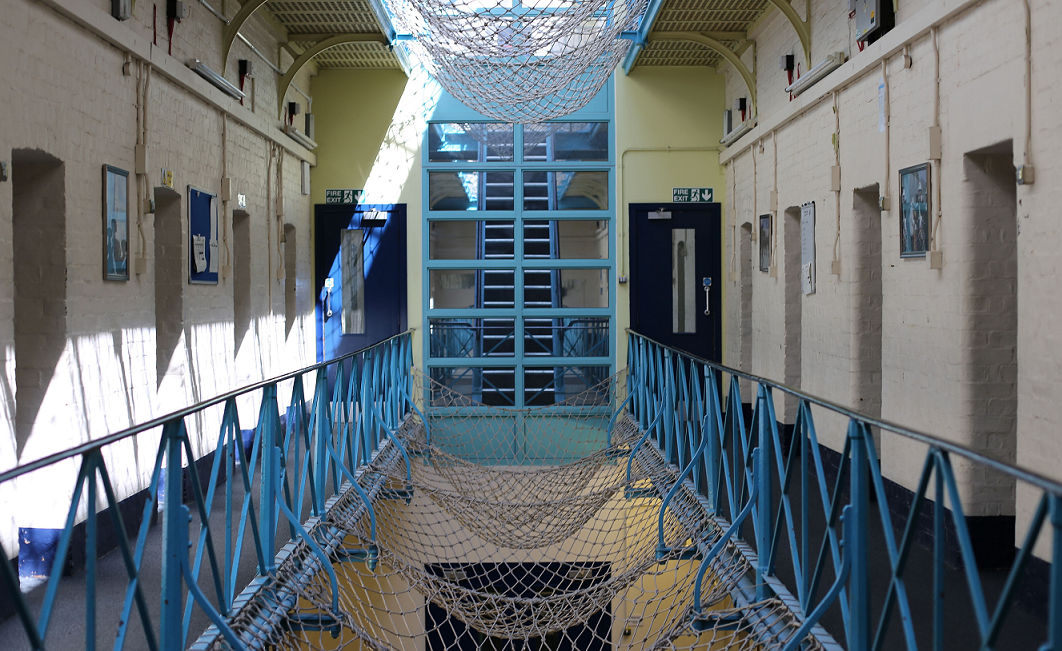 The guided tour included a look around the historic accomodation!

With trade stands from Mr Tuba, Phil Parker and Wessex Tubas, as well as a guided tour of the School of Music and career information there was plenty to enjoy during lunch, before it was time to hand over to the irrepressible tuba virtuoso Les Neish.

Les focused on the importance of breath control and production, with the audience almost resembling a yoga class at times as they unlocked the mysteries of the foundation of high quality brass playing. It was a wonderful demonstration of what underpins the ability to enjoy as well as improve your playing.

The final masterclass guest was David Childs, who gave a series of open lessons to some of the current euphonium students at the School of Music.

The opportunity to be able to watch a student develop in an open lesson environment was something everyone could relate to; with elements of stage craft and body language explored alongside priceless tips and guidance on improving the smallest details of performance technique.

Playing within an ensemble was also addressed with a euphonium/tuba quartet from the School of Music, with both Les and Dave contributing insight into improving performance as a group. 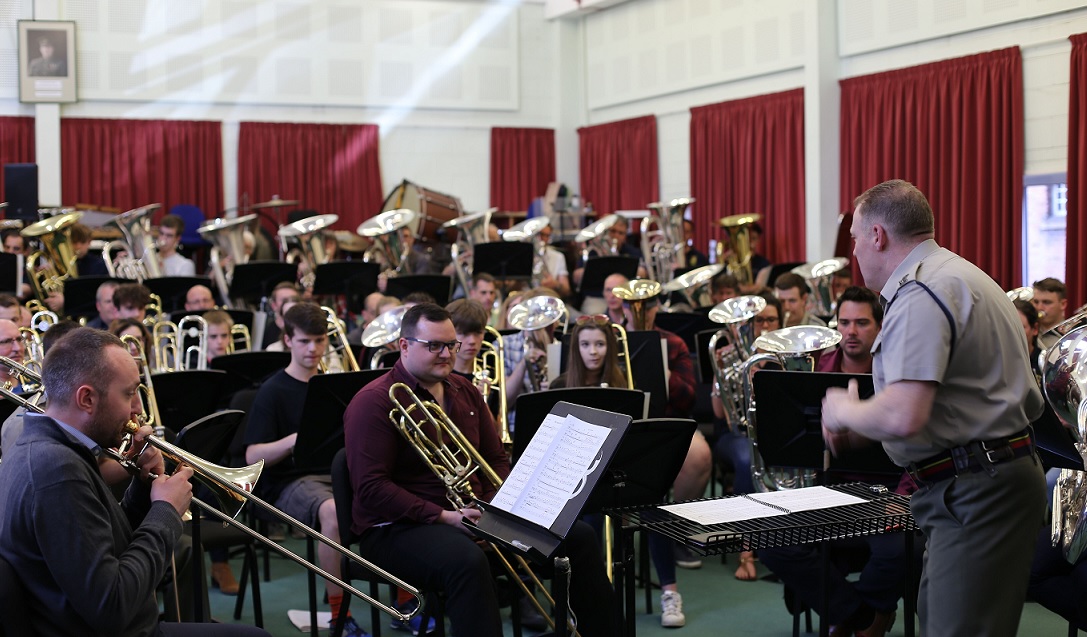 To round off a memorable event it was a ‘massed blow’ that brought things to a thrilling conclusion, thanks to Kevin Morgan, Principal Trombone of the Bournemouth Symphony Orchestra.

He had composed a new work ‘Portsmouth Partita’ - a ‘concerto grosso’ for low brass featuring a concertino of the four guest artists; Robbie, Simon, Dave and Les, accompanied by the massed low brass.

He had composed a new work ‘Portsmouth Partita’ - a ‘concerto grosso’ for low brass featuring a concertino of the four guest artists; Robbie, Simon, Dave and Les, accompanied by the massed low brass.

The work was well received by the ensemble and with the enthusiasm of Major Curtis at the helm a very commendable performance was achieved within just 45 minutes.

It was a fine end to a wonderful day, with thanks going from the Royal Marines School of Music to everyone who attended and supported this event, and especially the remarkable quartet of guests Simon Minshall, Robbie Harvey, David Childs and Les Neish and composer Kevin Morgan.