There was a time when England went to World Cups with high hopes of success, a bubble permed captain and a tournament anthem featuring a brass band accompaniment... 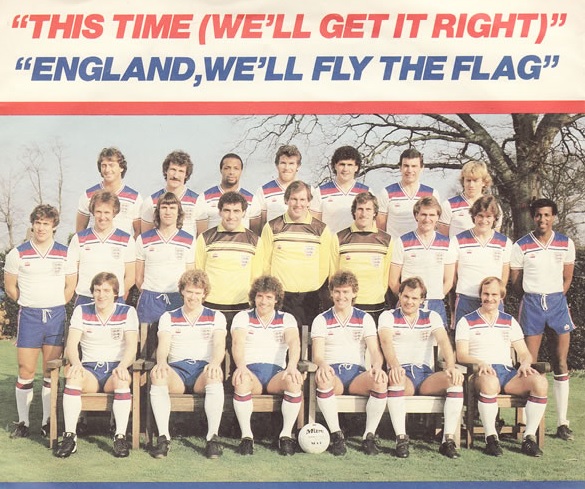 England's finest were sent off to Spain backed by Leyland Band...

With the World Cup kick-off in Russia fast approaching, its always good to recall a time when England’s optimistic hopes of lifting the trophy were aided by the sound of a brass band playing along to the squad’s pre-tournament World Cup ditty.

The songs have been around for nearly 50 years now - from England’s number 1 hit from Mexico 1970, ‘Back Home’ (which they soon were after an infamous quarter-final defeat by West Germany), to the 2018 effort which for some unfathomable reason will be performed by American actor Will Smith.

Some have been good (New Order’s ‘World in Motion’ in 1990 went to number 1), whilst others have been far less memorable (‘We’ve got the Whole World at our Feet’ peaked at number 66).

All though have failed to help the team repeat the historic victory of 1966 (the less said about some of Scotland’s efforts the better).

All though have failed to help the team repeat the historic victory of 1966 (the less said about some of Scotland’s efforts the better...).

However, back in 1982, with hopes high for Ron Greenwood’s squad in Spain, the task of sending the team on their way with a rousing patriotic song of triumph fell to Chris Norman and Pat Spencer from the Bradford pop group ‘Smokie’ (best known for their hit, ‘Living next door to Alice’) - with the help of a certain Leyland Vehicles Band.

Not exactly World Cup Willie. The Spanish came up with an orange mascot called Naranjito...

The pop duo had previously worked with bubble-permed England captain Kevin Keegan for his execrable love song, ‘Head Over Heels in Love’ which reached the giddy heights of number 31 in the pop charts in 1979 (when he was playing for Hamburg in Germany).

They therefore seemed to be the ideal choice to link up with England as they returned to the World Cup Finals for the first time since Gerd Muller had broken English supporters hearts in the heat of Leon 12 years before...

All seemed set then for a record that would be the precursor to England glory and the end of the ‘Three Lions’ 16 years of hurt...

However, as Leyland’s conductor Richard Evans recalls, the planning for the record was slightly chaotic to say very least...

“I got a call from a couple of blokes one night who said, “Are you the brass band fellow?”

“Can you play along to a record we are producing?”

So, after introducing themselves the Smokie duo invited Richard to visit them the next day in what turned out to be quite a spectacular country house near Guiseley in West Yorkshire. 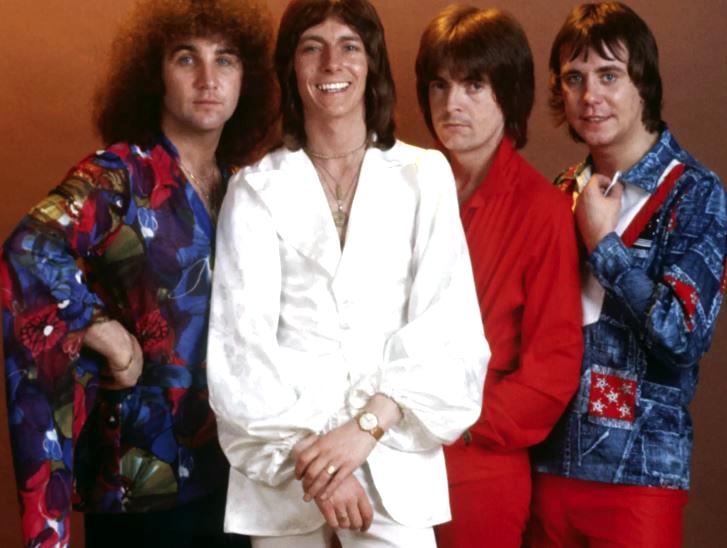 Smokie in their prime...

“I drove up and saw this big lorry parked on this gravel drive outside this posh country house with electrical cables and all sorts leading from it”, Richard recalls.

“I popped my head in and asked if Chris and Pat were around, only to be told by a chap in jeans and a tee-shirt to follow the long path into the house as they were in the studio. Off I went and there they were listening to some music.”

After further introductions and a few minutes listening to a basic instrumental track, came the full explanation – and the request if Richard could sort out some music to accompany the rather jaunty song provisionally called ‘This time - We’ll get it right’.

Back came the reply: “The England World Cup Squad”. 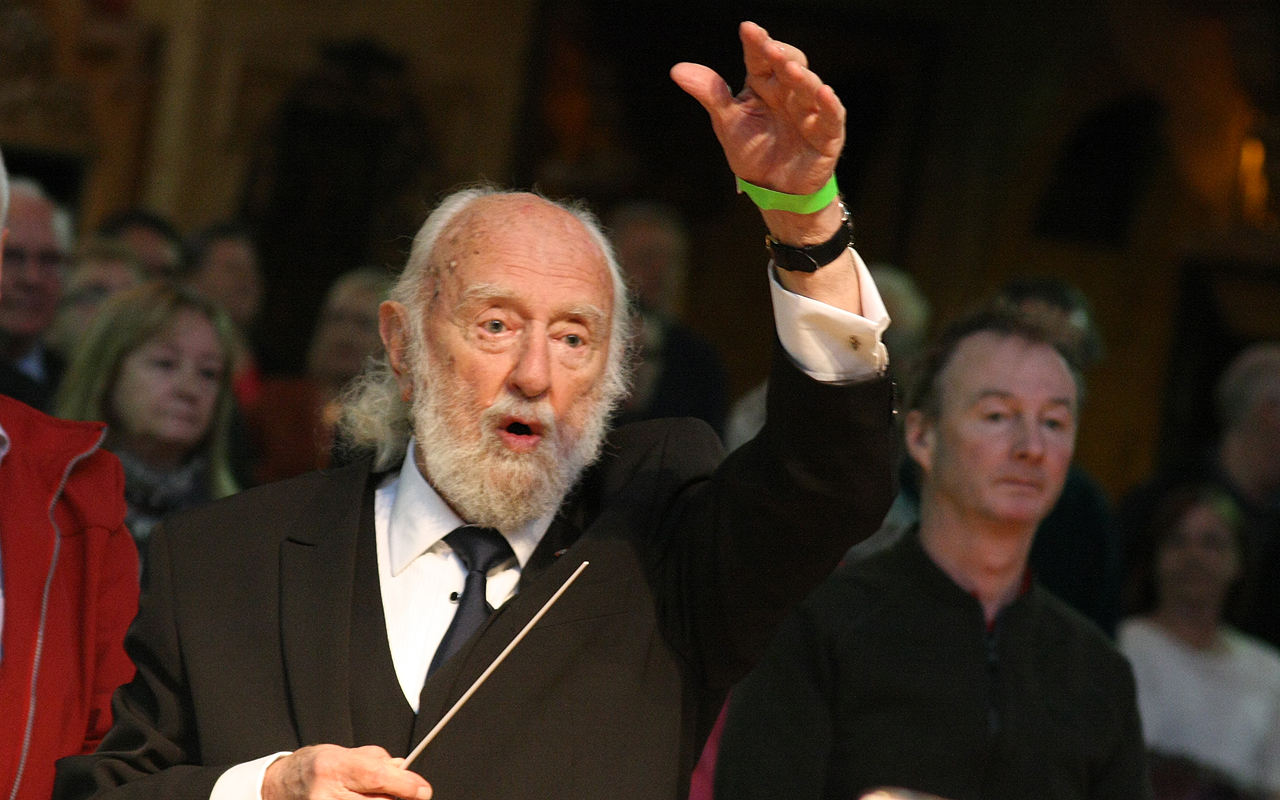 The best manager England never had...

And with that Richard was left with less than 24 hours to come up with the accompaniment to be recorded at Leyland Band room the following night.

“I didn’t quite realise what I had let myself in for!” Richard recalls.

“I knew what was wanted and sketched an outline, but given that we only had a few hours to get it sorted I rang a chap called Jim Pearson, who did some great arrangements for the band at the time, who came around to my house the next morning and worked on it all day ready for the night’s rehearsal.”

At 7.30pm the following day the band waited as two Porsche sports cars parked outside the bandroom and the lads from Smokie came in to listen to what Richard had come up with.

Thankfully they loved it – although as they had their own drummer the poor Leyland kit player, much like third choice goalkeeper Joe Corrigan was demoted to an unused squad member.

Thankfully they loved it – although as they had their own drummer the poor Leyland kit player, much like third choice goalkeeper Joe Corrigan was demoted to an unused squad member.

“The Smokie lads were great - real down to earth boys.” Richard says.

“However, after we did our bit it meant the band wasn’t needed for the actual recording of the singing by the squad at Abbey Road Studios a few days later, so we never got to meet the stars themselves.

I don’t think our lads were that bothered though after they heard that it had taken them ages to sing in tune or even remember the words!” 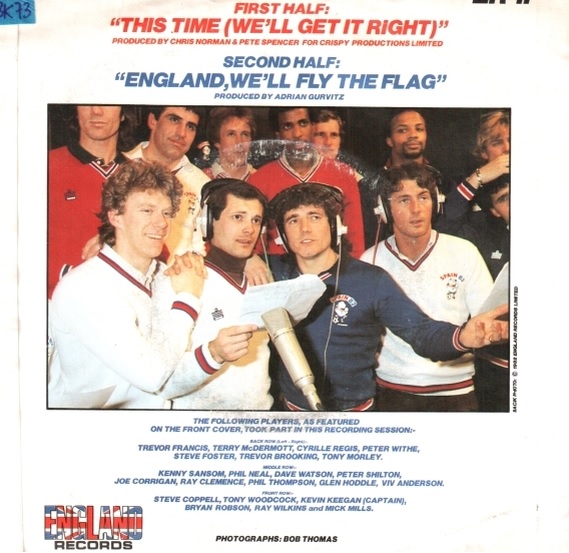 However, the one thing that hadn’t been sorted though was a fee - and Richard, sensing that this could be the biggest breakthrough for a brass band on the pop scene since ‘The Floral Dance’ was keen to ensure Leyland didn’t miss out.

“The next day I went to the legal department at Leyland to make sure we were going to be properly paid, as the sales were projected to be in the hundreds of thousands.

Unfortunately the legal team in the offices was more used to dealing with brakes and engine contracts and knew nothing of pop groups, so I was advised to accept whatever deal was offered as it was good publicity for the company.”

The upshot was that the band was paid a one-off fee of £1,700 and that was that.

Unfortunately the legal team in the offices was more used to dealing with brakes and engine contracts and knew nothing of pop groups, so I was advised to accept whatever deal was offered as it was good publicity for the company.”

“We never got on ‘Top of the Pops’,” Richard laments with a wry laugh.

“Even though just like Brighouse & Rastrick the single was only kept off the number 1 spot by Paul McCartney signing ‘Ebony and Ivory’ with Stevie Wonder”. 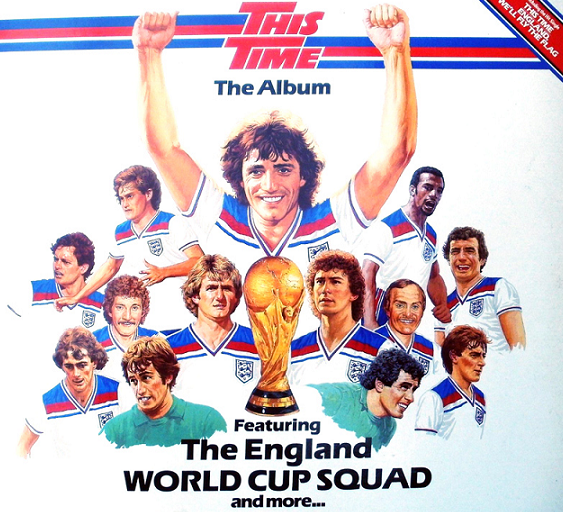 Just one thing missing... they didn't win the cup

There was however some lasting legacy to the single, as the band went on to record an instrumental version of the song which was included (alongside the theme tunes to sports programmes ‘Grandstand’ and ‘World of Sport’) on an album on the K-Tel label, which inexplicably also included a young Glenn Hoddle shrieking his way though Queen’s classic hit, ‘We are the Champions’.

The final ignominy was that Kevin Keegan, who so enthusiastically sang his lyrics, missed a simple header that would have sent England through to the semi-finals.

Not surprisingly the album was soon consigned to the bargain basement basket as England, who stared brilliantly by beating France in their first game by scoring after just 1 minute and followed it up with wins against Czechoslovakia and Kuwait, failed to score a goal against either West Germany or Spain in the Second Round group stage to progress any further.

The final ignominy was that Kevin Keegan, who so enthusiastically sang his lyrics, missed a simple header that would have sent England through to the semi-finals.

And as for the other British teams at the tournament?

Northern Ireland (aided by their pop song, ‘Yer Man’ sung by 1970 Eurovision Song Contest winner Dana) came back heroes after famously beating the hosts Spain, whilst Scotland once again returned empty handed (not helped by a brace of terrible World Cup songs – one of which was a geographically challenged ditty called ‘Viva Scotland!’ sung to the Italian tune of ‘Funiculi Funicula’ by a bloke in a tartan hat called Ben Gunn).

And as for Richard’s memories of an era when football, pop and brass bands paved the way for potential World Cup glory?

“I would love to do another record again, even though I would make sure the band would be better paid!” he laughs.

“I wish the team all the best in Russia though, although I think they may need it...”