Allan Littlemore recalls the tale of a missing Fred Mortimer statuette and his hopes of finding one more... 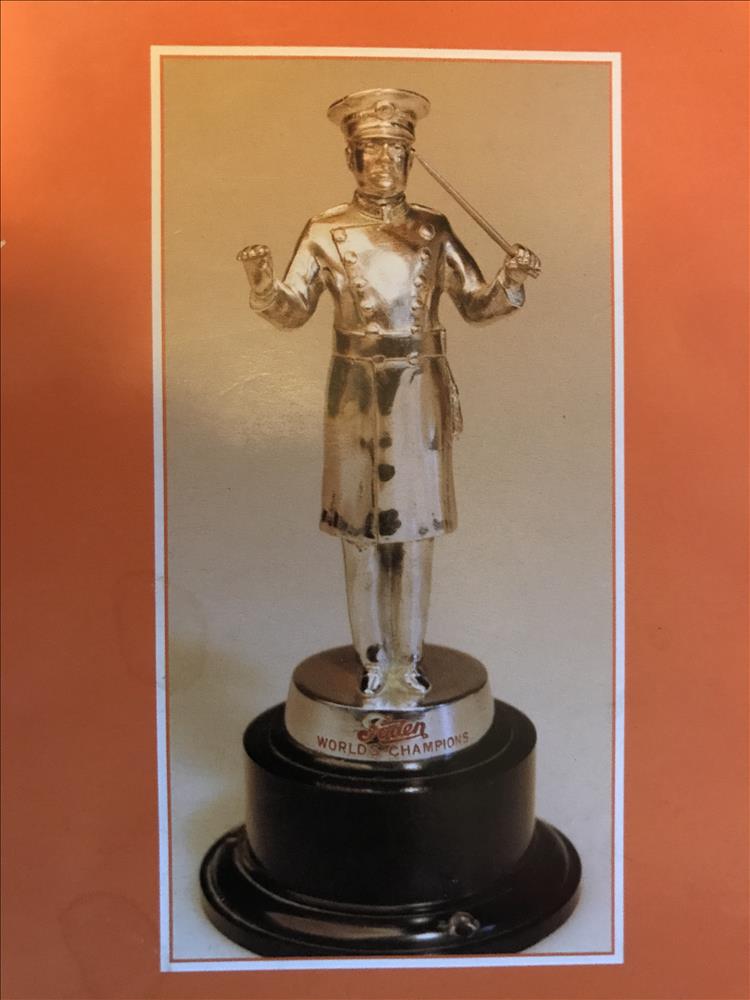 With Foden’s Band currently researching its rich history as part of their Heritage Lottery Fund project, little known stories and unexpected gems of their past have come to light.

One such is the tale of a missing Fred Mortimer radiator cap statuette.

An outstanding book, 'One Hundred Years of Musical Excellence' was written by Allan Littlemore to celebrate the Sandbach band’s centenary in the year 2000, with the back dust cover featuring an image of a gleaming 8” high miniature statuette of Fred Mortimer (baton in left hand) with the title ‘Foden - World Champions’ inscribed beneath his feet (above).

It was one of just six specially made in the 1930s, to be fitted to their brand new 'Bandmaster' single deck coaches - a mark of the esteem in which Mortimer was held, as well, as a reflection of the ‘World Champion’ status the company hoped their coach would attain with potential buyers.

At this point Allan takes up the tale...

“In the early 1930s, Edwin Foden, the founder of the great firm had been dead for 20 years, and his two sons were a world apart - literally.

The elder son Billy, fed up of his stepmother’s endless criticism, had emigrated to buy a sheep station in Australia, whilst the younger brother, Edwin, had also fallen foul of her cronies and gone to live with his housemaid at Blackpool. The company was in trouble.

And so, on introducing the sparkling new single deck ‘Bandmaster’ coach, he came up with the bright idea of putting Fred Mortimer on its bonnet - Allan Littlemore

However, their step-mother, Annie Cowap Foden, was the major share holder, and finally appointed a certain Reginald Wood-Whittle, who just happened to know his business and was by chance a great fan of the all conquering Foden’s Band.

And so, on introducing the sparkling new single deck ‘Bandmaster’ coach, he came up with the bright idea of putting Fred Mortimer on its bonnet.

The chromium plated effigy looked wonderful; but had an obvious flaw: It was easily pinched.”

Allan though wanted to find out what happened to them, and over the years his detective work unearthed the truth - 4BR

Allan though wanted to find out what happened to them, and over the years his detective work unearthed the truth.

“It was reported that the first two fitted to the coaches were missing, perhaps stolen, but probably lost forever,” he said. “So that left four - one of which was retained by the man whose idea it was, Reginald Wood-Whittle - perhaps as his own little link to the band he was such a fan of.

Not surprisingly, Harry Mortimer had one, whilst during the winding up of the old firm in 1980, one of the Official Receivers, Martin Iredale, and a brass band fan, got his hands on one.”

That left one; which Allan found out was in the possession of the now deceased Alex Humphreys, one time Chairman of Stoke City Football Club – although it was missing the Fred’s baton.

No more in the world then, until one day Allan was asked to come straight to the Foden’s Director’s office……

“In December 1991, the widow of that great Foden’s principal cornet player, Edwin Firth, who was killed on the Somme in 1918, passed away aged 99,” Allan recalls, “And her son, also Edwin, had been my Director at Foden’s some years before.

One day he asked me to come to his office where he presented me with a gift.  On unwrapping the package I found to my amazement that it was a chromium statuette of Fred Mortimer (above), complete with baton, and mounted on a black plastic plinth and inscribed ‘Foden’s Band - World Champions’.

However, now that five have been found, all I want to try and do is find the one that is still missing. Finally having the complete set would be something very special indeed for Foden's history - Allan Littlemore

It was as if I had found the Maltese Falcon or the Jules Rimet World Cup and my joy was unconfined. This was a link to Foden’s history I thought had been lost forever.

However, now that five have been found, all I want to try and do is find the one that is still missing. Finally having the complete set would be something very special indeed for Foden's history.”

So the next time you are watching ‘Bargain Hunt’ or ‘Antiques Roadshow’ on the television, and a small chromium plated statuette of a rotund left handed brass conductor appears, then you know who you have to get in contact with...