All the action from the 2017 Butlins Mineworkers Championship Section 2 — as it happened. 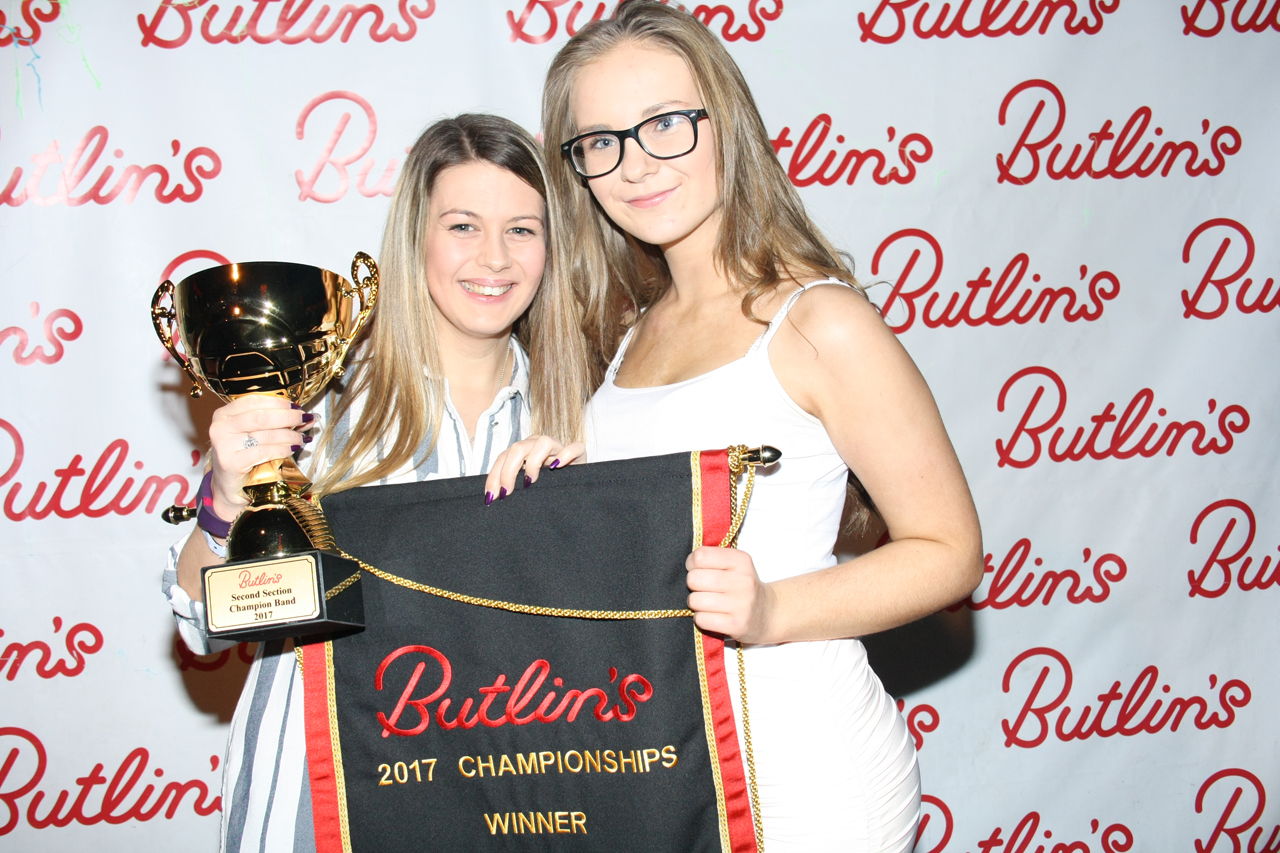 Iwan Fox's contest round up and prediction:

It's been a bit of an inconsistent contest here today — although that want the fault of the piece, which was pitched at the top end of these bands expectations and abilities but was not beyond any of them.

Two performances stood out for us — with a brace of high quality solo and ensemble playing the features from Haydock and City of Coventry. Pemberton and Crofton delivered contrasting accounts that just had a few too many little gremlins, and Besses may just have gone a little over the top in search of excitement. Hucknall in contrast were the opposite and could be a dark horse for a podium finish.

Talking of dark horses, we go for Bodmin and Milton Keynes.

A rather inconsistent account to close a contest that was inconsistent in itself. When this was good it really came to life, shining with passion, precision and verve. But when it didn't it was a little messy and wayward. Plenty of great middle band sounds — love the baritones especially. Just lost its focus to close — but another engaging show.

An understated account that showed admirable control and subtle changes in dynamics and tempo — led by the MD. It was a little scrappy in execution at times, but it was good to hear a band that didn't try to up the volume to gain excitement. Lots to enjoy there — and could be in with a shout for a top six finish.

What a splendid show — with the best opening by a mile today. The music is delivered with such character and flow. Love the fruity bass trom who adds colour to compliment other fine solo leads and well balanced ensemble. Just a few scrappy moments when the tempo goes up a notch or two, but overall that was a very well managed account, expertly led.

An enjoyable take on the score this from the MD — full of evangelical passion and happy clappy rhythmic vitality. It was scrappy and flawed, but it held your attention and never wavered. All fire and brimstone in places but that wasn't a bad thing. May not feature but it was spicy and engaging.

An inconsistent performance that at times thrilled but on other occassions just had you gritting the teeth. The MD kept the music flowing and there were lovely little moments especially from sweet sounding cornet and bold tubas. Never quite sounded at ease as a whole though.

The defending champion gives it the full hog in defence of their title — and a little bit more besides. It's super confident playing that occasionally loses focus and balance is pursuit of excitement. When it gelled it was thrilling, but it also had obvious flaws and discomfort. Up there, but don't know if it's quite enough to secure another title.

Certainly no shortage of confidence and bravura about this — balanced with lyrical intent too. It just needed a little less of the red blooded evangelical zeal in places and more Methodist reflection, but it certainly got its message across from start to finish, if a little messily.

A colourful account that was just a bit too scrappy in execution to really sound at ease. Some lovely touches in places from the MD and his players, but this just sounded on the edge of their technical abilities. Plenty of brio and spirit, but that may not be enough to make a mark today.

Oh so nearly a cracker. The best take on the piece so far today — subtle changes in tempo, and malleable lyricism, but the execution was riddled by so many little unforced errors and inconsistency. When it did come together it was splendid — but despite the obvious flaws it still captured the essence of the piece so well. All for one Comrades.

A bit of a hit and miss one here — that despite the obvious inconsistencies always held your musical attention. When it was good it sang with emotion (esp with super solo cornet and sop). Just needed a few cranks on the ensemble wrench to get the precision pin-point when enthusiasm just got the better of them.

The MD used all his years of experience here — drawing out a lovely, lyrical reading (aided by the excellent perc) that had so much time and space. It was a pity that some nerves and occasional scratchy moments just tarnished the picture, as the approach nearly had you standing in the pews giving it the full evangelical hog. A nearly one.

A performance full of brio and verve — if a little on the edge at times with tempos and dynamics. MD kept the music flowing — at times at a brisk old rate, but some fine solo contributions and that sense of verve kept it just on track. 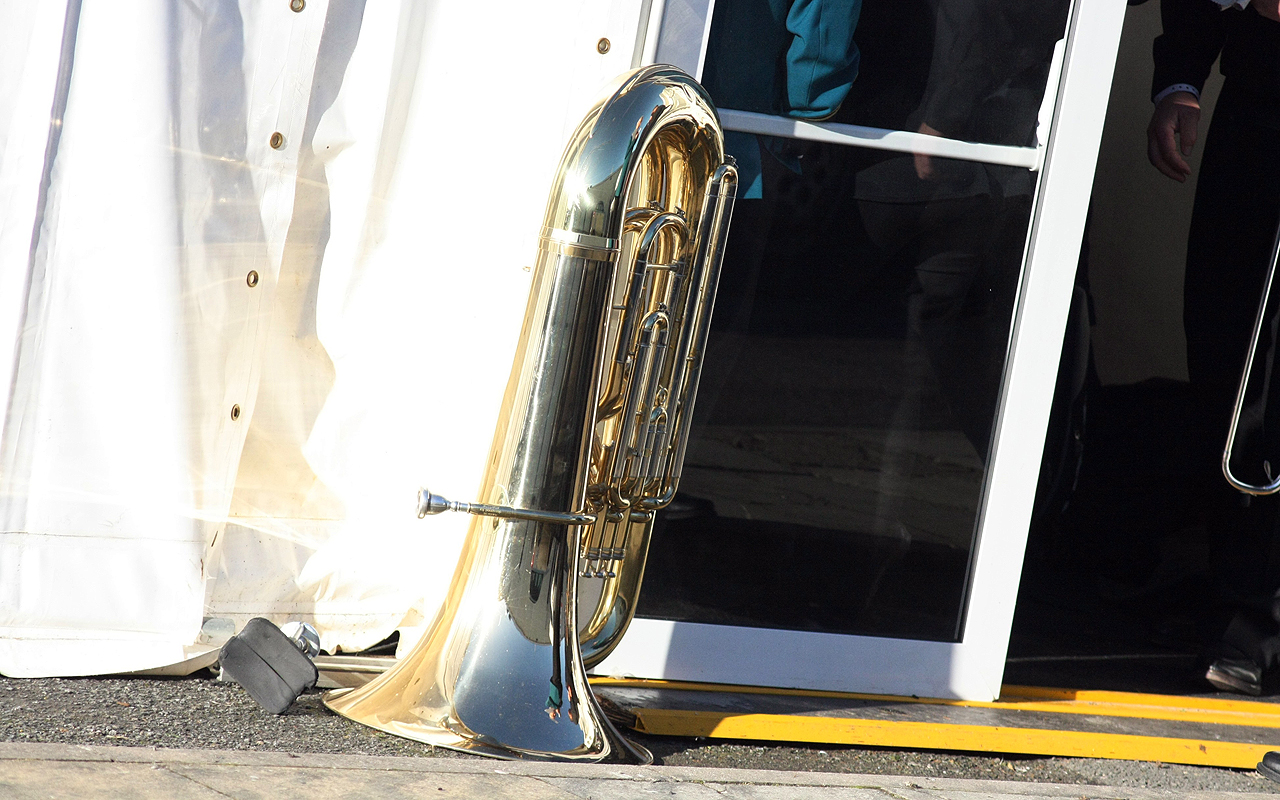 Anyone lost a bass?

It's sped along here in the Second Section, so we are having a quick break already. It's been a cracking little contest with all the bands producing well managed performances.

The stand out show though has come from Haydock — real swagger playing with wonderful soloists. We understand that they have also done this by overcoming some very difficult circumstances with the death of one of the player's parents last night. Bravo to every one of them.

A spirited effort on a piece that stretched the ensemble on occasions. MD kept the music flowing and was rewarded by some fine solo line contributions (esp flugel and a cracking bass trom). Just got its feet caught on a few occassions, but the reprise bowled along with free flowing evangelical brio.

Thre was a time when all brass band contests were a ticket tout's happy pay day — and if they were charging for black market tickets here old Private Walker from Dad's Army would have made enough to keep the land girls in silk stockings for the whole of the war.

Standing room only — like a oversized party game of musical chairs.... Great stuff.

Well that wasn't short of confidence was it now. Right from the start it had that touch of swagger — occasionally a little wayward, but brimming with intent. The soloists (euph esp) revelled in the spotlight and the MD made the music malleable and passionate. A band on a bit of a Butlins mission you feel.

The marker performance? Lots to enjoy both with the MDs approach and the musical execution of the players here — tasteful, delicate and light when required, bold and bravura when needed. It was a little scrappy in places, but the fine soloists (sop and flugel esp) and the overall sense of musicality shone through. 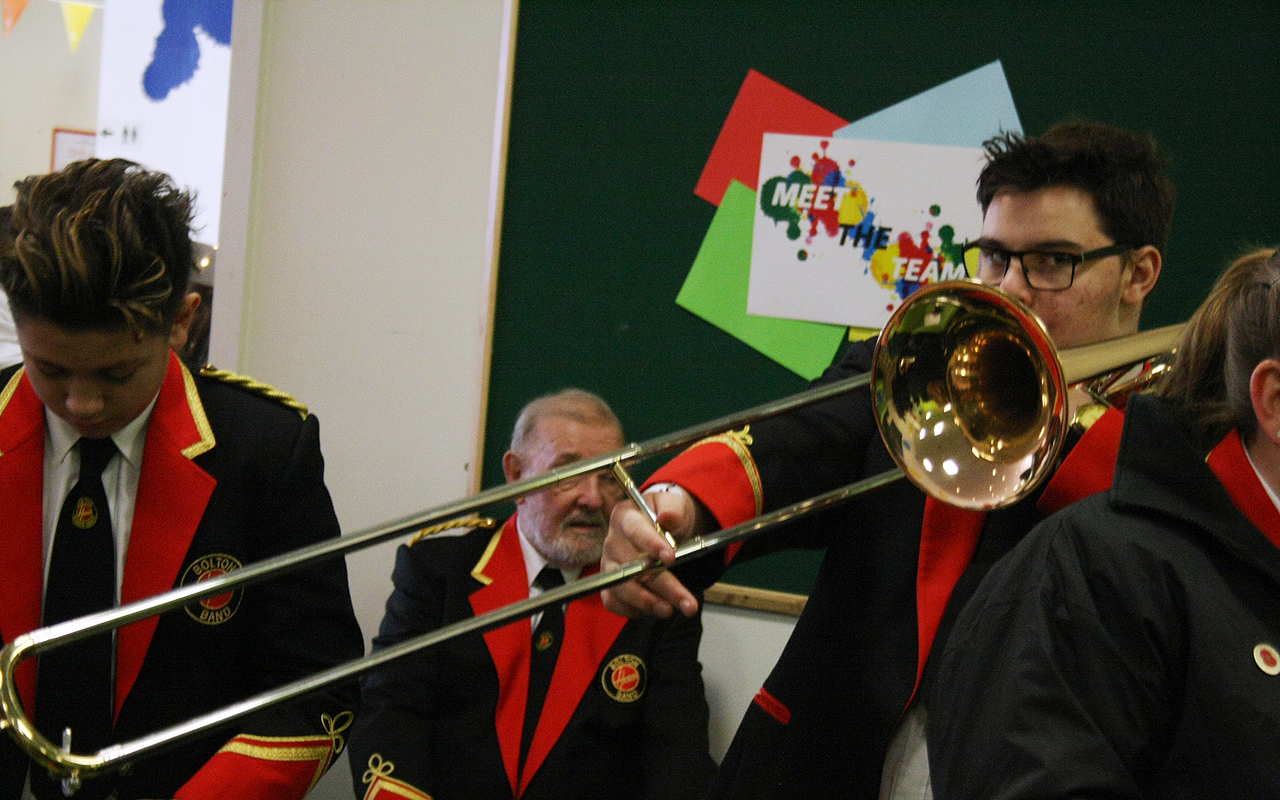 Getting ready to take the stage — Hoover Bolton

A performance that grew in stature after a very nervous untuneful start. It's was helped by the MDs stylish appreciation of the music and some fine solo lines — especially a lovely flugel. Some of the technical demands stretched the ensemble but it retained its focus to the close.

There was an elegant touch of a young Ray Farr about the MD in his conducting style — and that came through in the performance too — broad, lyrical and sweeping. Not everything was precise in the detail and a few nerves were evident, but the musical approach was enjoyable.

A bold and colourful account to set the marker — full of spirit and brio. The MD made the subtle changes in tempo work well and the precision of the cornets and the sop in particular was very good. A few nerves elsewhere, but overall a pretty solid one.

We are all included...

The action in the Second Section kicks off at 10.30am — so a little bit of time before Bob Stradling and Milton Keynes Brass take to the stage to try and impress Brian Rostron and Allan Holdsworth on Paul Sharman's 'Inclusion'. 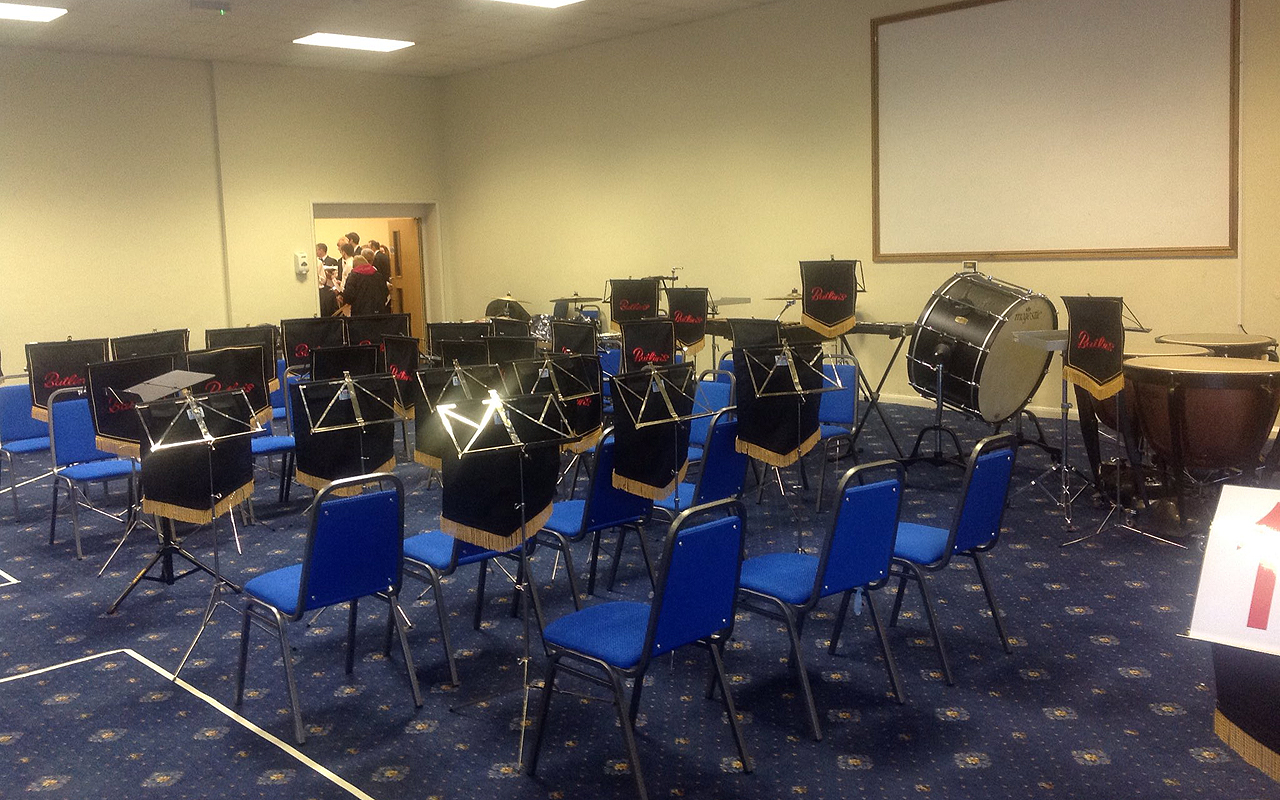 The stage is set in the Royal Arthur Suite 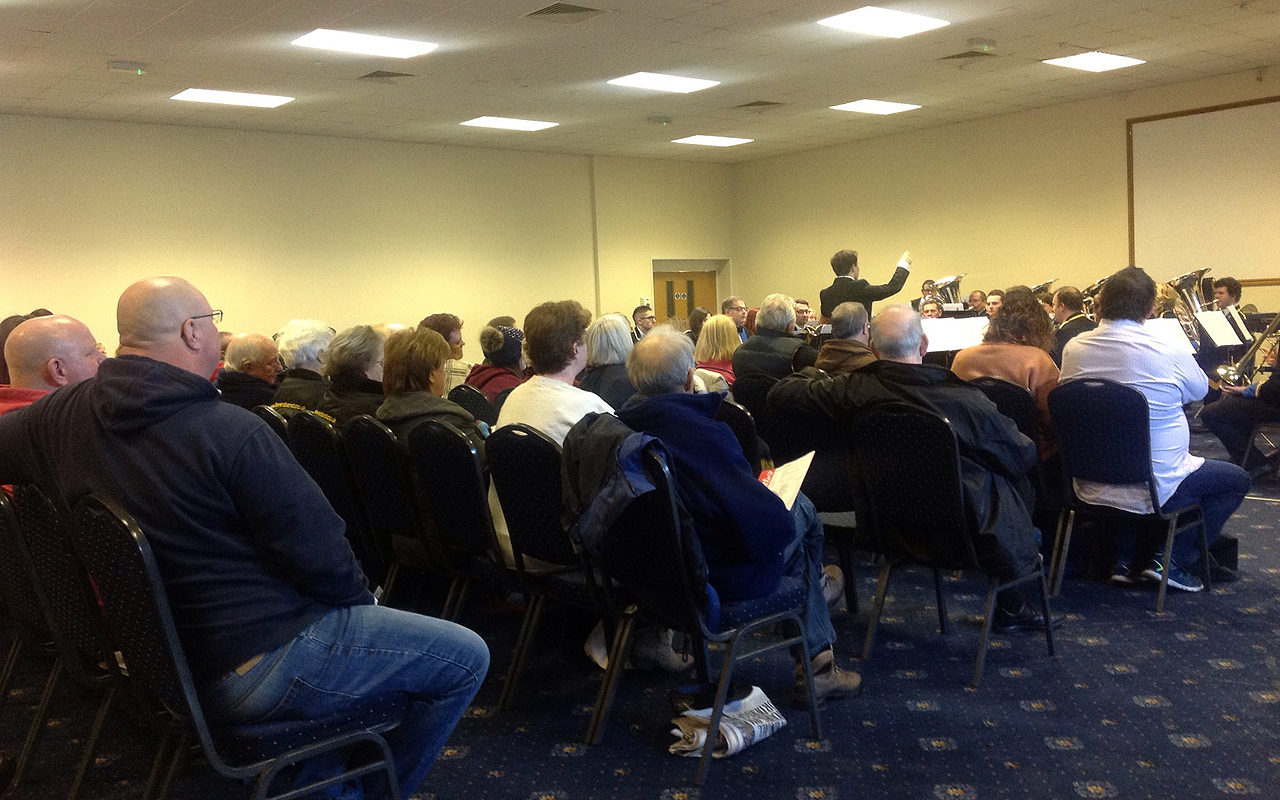 and then the action begins in the Royal Arthur Suite