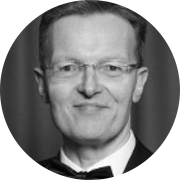 Born in 1961, Chris Wormald was awarded The Mortimer Medal in 1998 from The Worshipful Company of Musicians at the British Open in Birmingham Symphony Hall and was named 2001 Classic FM Music Teacher of The Year at a lavish ceremony in London, presented by Leonard Bernstein's close friend and biographer, Humphrey Burton.

Chris has been a senior member of both AoBBA and BBCA, the Brass Band Conductors' Association, since the early 1990s and has won numerous contests, competitions, festivals and awards as conductor, horn player, pianist, teacher and arranger. Now into his fourth decade as a professional adjudicator, Chris has over one hundred adjudications to his credit all over the World since 1991 with the emphasis on Championship Section and international contests since 2004.

Chris appears numerous times in the 2020 BAFTA-winning Sky Arts television Whit Friday march contests programme in which he was not only studio interviewed but filmed at Greenfield preparing his adjudication paperwork.

Chris has conducted brass bands professionally since 1983. Particular highlights include conducting Brighouse & Rastrick at the 1994 Leek Arts Festival, following Howard Snell as MD of Wingates (1998-2000), conducting Grimethorpe in concerts from Reading Town Hall to South Wales in 2007 whilst the band was National Champions of Great Britain and conducting Black Dyke Band in concert performing his own arrangements in both 2018 and 2019.

Chris joined James Shepherd Versatile Brass as horn soloist for five years at the personal invitation of Jim Shepherd in 1990, the year Chris was also appointed to Smithills School for the next 27 years having been Head of Brass Instrumental Teaching for Bolton MBC 1983-1990, during which time he also taught at the RNCM in Manchester.

As a teenager Chris was a member of the NYBBGB alongside Ian Bousfield, Nick Childs, Steven Mead, Lindsay Shilling and Martin Winter and played with the band under Harry Mortimer at Belle Vue in 1978.

Chris formed his internationally renowned Smithills School Senior Brass Band in 1991 and over the next twenty years of competition, together they won over fifty major national and international competitions including becoming inaugural World Brass Band Champions in Kerkrade, Holland in 2005 (Adult, 3rd Section), winning twelve National Festival of Music For Youth titles in just sixteen years at the Royal Festival Hall in London and Symphony Hall in Birmingham, including two runs of five consecutive years of victories in that time; a level of national success never before achieved by any school.

Chris conducted Smithills all over the World on over twenty major concert tours abroad, from Norway to New Zealand and Japan to the USA (five concert tours) in addition to eight times at the Royal Albert Hall in London before he retired from teaching in 2015 at the age of 54 to earn his living as a freelance horn player, conductor, pianist, arranger and adjudicator.

Chris has over one hundred published brass band arrangements worldwide with Obrasso, Kirklees Music, Wright & Round, Studio Music and EMR. His Obrasso arrangements continue to be recorded on CD by Cory, Black Dyke, Brighouse & Rastrick and leading bands with soloists ranging from Tom Hutchinson to David Thornton.

Chris also has over one hundred published choir arrangements for SATB and piano which are sung and recorded all over the world, especially by choirs across America and mainland Europe.

As an orchestral horn player, Chris made his professional London debut in the Philharmonia Orchestra at the Barbican in 2003 after two decades of freelancing throughout the UK.