In the third of a new series meeting professional players in the Corps of Army Music, we find out more about Scots Guards percussionist Lance Sergeant Neil Brocklehurst. 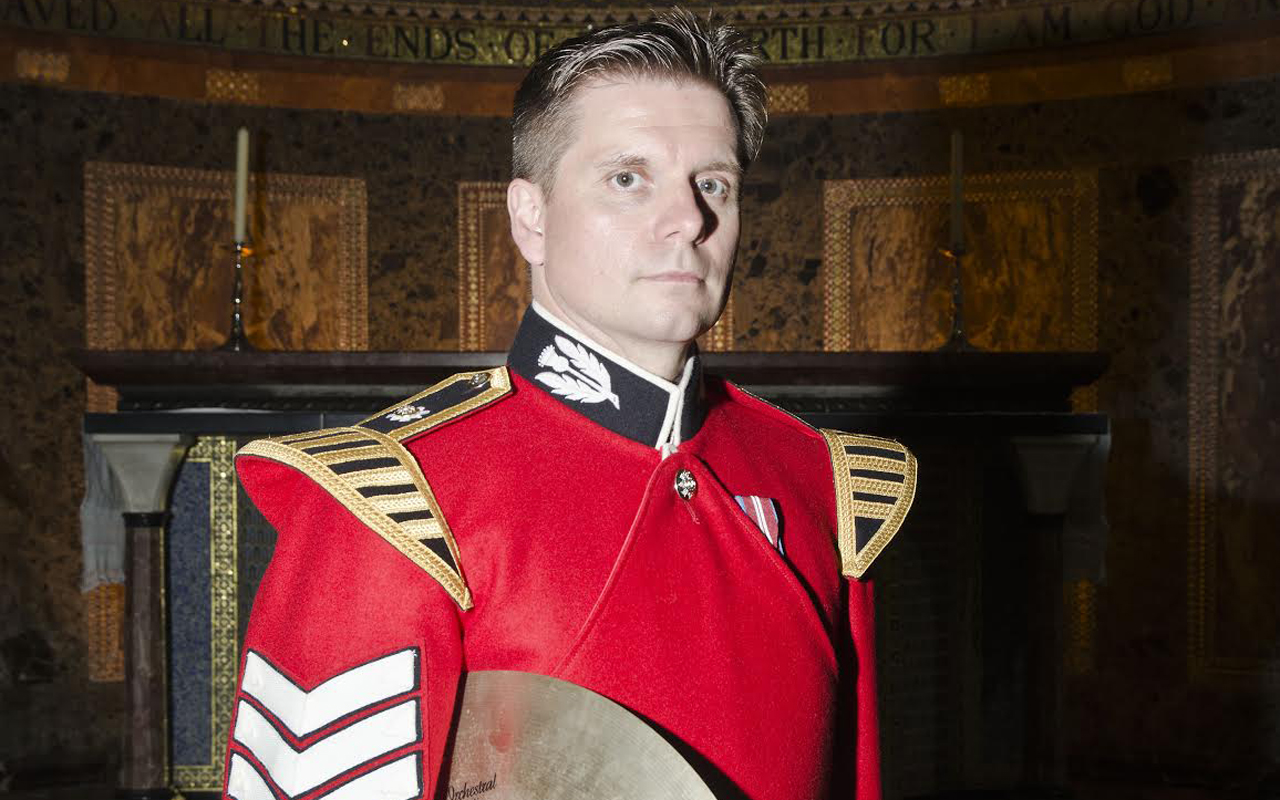 I started playing drums aged 4 and went on to study percussion at the Junior Royal Academy of Music. Later, I also studied kit playing with Bob Armstrong and Allan Cox.

I’ve also been the drummer on various UK tours and West End shows such as ‘Joseph’, ‘Blood Brothers’, ‘Scrooge’, ‘Grease’, ‘Copacabana’, ‘Whistle Down the Wind’, ‘Mary Poppins’, ‘Cabaret’,  ‘Chicago’, ‘We Will Rock You’ and ‘The Sound of Music’.

I decided to look into a job in CAMUS in 1997. My father was in the Scots Guards Band so I knew all about what the job entailed.

It was then really when I realised that I could be in the army and a professional musician at the same time.

3. Tell us a little about the training levels or the musical standards you had to achieve and undergo to get accepted into the Scots Guards.

I auditioned and it was a very high standard to pass.  This included scales, prepared pieces and a lot of sight reading.

I also had to do another audition at Kneller Hall which included a theory test, aural test, an orchestration paper and another practical performance - though today’s auditions are different.

So many: The Queen’s Diamond Jubilee concert with Robbie Williams, the Help for Heroes concert at Twickenham stadium with Alisha Dixon, the closing ceremony of the Olympic Games and appearing with Billy Connolly at the National TV Awards earlier this year for starters.

5. Has your decision to join as a musician lived up to the expectations?

Yes. It’s opened up so many opportunities to play a variety of music. You make lots of new contacts which can lead on to new work.

The regular wage is one of the biggest pluses for a musician, but you also get free dental and healthcare, so every part of what you do is looked after.

You get allocated grant money, learning credits and other opportunities for continued professional development.

There is access to world class music tutors at the Royal Military School of Music which employs some of the industry’s finest practitioners and teachers, but there can also be funding for private lessons.

There are also some great opportunities to study for a BMus in Music Performance (as well as other courses) at the University of West London.

We play all types of music from military marches to orchestral works, big band, pop and rock music.

As mentioned, the variety is something which keeps you on your toes as a musician; from overtures to jazz: You’ve got to be able to switch.

I usually get in early to get some personal practice done. We then have rehearsals for the Changing of the Guard (or whichever duties that require musical support), then after put on our uniform and perform in front of thousands of people at Buckingham Palace.

Although there is plenty of other work, this type would probably be considered the mainstay.

The Household Division bands are involved in so much around London with all the State Ceremonial occasions that the calendar demands; from the Queen’s Official Birthday Parade ‘Trooping the Colour’ to the State Opening of Parliament as well as any State Visits and Royal Weddings.

On top of that, there are opportunities to travel, so, there isn’t really such a thing as a typical day.

I’ve recently been promoted so I’m looking forward to another pay rise!

I’ve also been able to play with various bands ( jazz, rock  and pop) mainly in the London area, so hope to keep my army music and private work running side by side.

Get lessons from a teacher who is good for YOU, not just because someone else goes to them.