4BR links up with the Association of Brass Band Adjudicators to help shed some contesting light on what the judges may be looking for on the Fourth Section Area work this year. 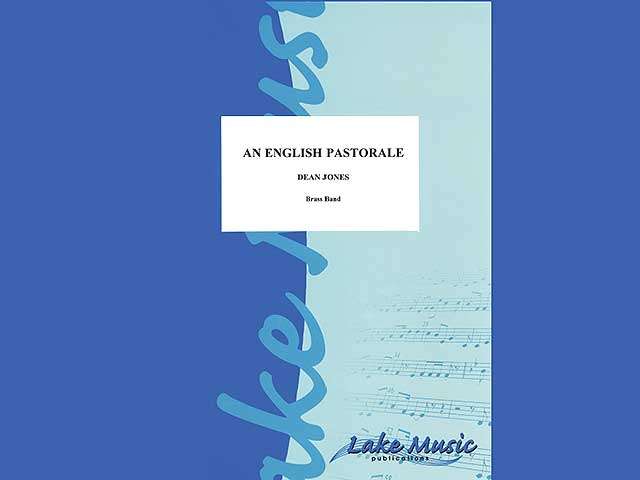 4BR is working in association with the Association of Brass Band Adjudicators (ABBA) to help give bands a little bit of contesting insight into what the judges may be looking for with each of the set works for the Area Championships this year.

We start with ‘An English Pastorale’ by Dean Jones, which has been set for the Fourth Section.

The experienced Sarah Groarke-Booth, who led the Marple Band to Second Section glory at the National Finals in Cheltenham, has already presented her detailed insight into the test piece at a recent workshop initiative held in partnership between ABBA and Bolsover District Council - and ABBA (along with publishers Lake Music: http://www.lake-music.com/) has kindly allowed 4BR to publish it with examples from the score.

“I would like to thank Sarah for her detailed and analytical insight into the 2015 Fourth Section Area piece on behalf of ABBA which was presented in full at the NABBC workshop on 25th January 2015 in the Midlands.

Publication of this document gives every Fourth Section band across all eight areas the opportunity to understand the music and develop a detailed plan on how to solve its problems and work towards a successful performance at the area contest.

The Performance Assessment Criteria (PAC) document which is available on the ABBA website (see Articles and Resources- http://abbadjudicators.org.uk/) will also provide all of the necessary information as to what adjudicators will be looking for and how they will assess the performances they hear.

It is therefore strongly advised that all bands and conductors taking part should put the two documents together and devise a plan of action that will avoid the pitfalls and traps in the piece whilst still producing a musically rewarding and enjoyable performance.

The Association of Brass Band Adjudicators and more specifically members who have been tasked with adjudicating a Fourth Section Area in the 2015 series are very mindful and aware, in most cases through experience, of the difficulties associated with running a successful Fourth Section band.

We understand the difficulties of attracting players and maintaining interest through different styles and requirements of test-pieces, particularly in the percussion department.

However, I would like to make it plain to all competing bands that it is of paramount importance that anything that appears on the score is required to be played and in accordance with the PAC document, if it is not played this will be subject to penalisation along with any other discrepancy in performance.

Other more positive points of performance will not be affected in the final assessment and an adjudicator will use his or her skill to balance the plus points and the negative points in reaching a decision.

Recent correspondence to the Association has asked for us to make this point very clearly.

My best wishes go to all bands competing and I hope you all find it to be a positive experience no matter what the result is.”

Dean Jonesʼ ‘An English Pastorale’ will prove a good test for the Fourth Section bands at the Area contests this year.

Whilst not overly technically demanding, there is much music to be found in this work.

Whilst preparing the piece emphasis would be best placed on developing a tight, cohesive, rhythmic ensemble and securing fine balance, intonation and breadth in the bandʼs approach.

A broad Maestoso opens the work with a wide intervallic motif, stretching upwards with fourths and sixths (and their inversions). 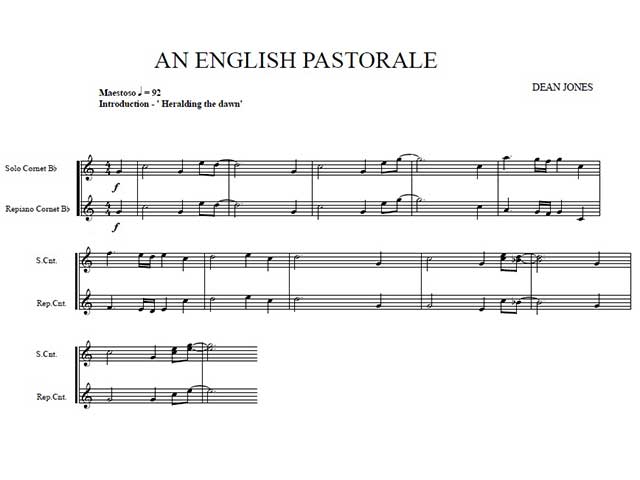 We also hear a falling minor 2nd, with all these intervals supplying material for development later in the work.

There is a full forte ensemble sound and a richness to the texture. 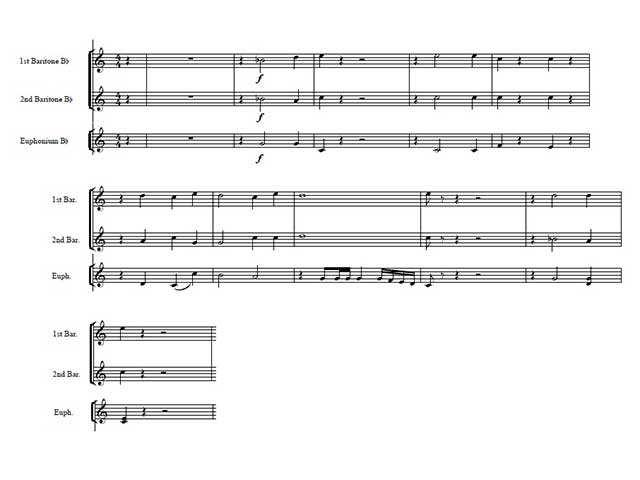 There are glimpses of the composerʼs rhythmic style with the ʻpushed accentʼ in the theme and the interplay between different sections of the band, where clarity and beat cohesion will prove important.

I. Autumn on the Plains

Marked Allegro con spiritoso =112 (and it sits well at this tempo), the percussion section set the pace with a lively 12/8 rhythm.

The trombones (below) send us on our way with an arpeggiated statement (incorporating the already noted intervals) and weʼre off with a bouncing, C major accentuated quaver figure in the cornets.

This figure nudges a tone above and below the tonic with some cross rhythms complementing the bass endʼs syncopated crotchet motif, built from the established intervals.

The main theme begins at Rehearsal Letter A; presented unison in the flugel and horns (below), and lightly accompanied by the cornet section.

We hear the 2-bar rhythmic quaver/syncopated crotchet theme again - it reoccurs throughout this movement, rondo-like.

The second theme, heard at Rehearsal Letter B is more legato in nature.

The flugel (below) takes the lead in a quintet supported by cornet, horn, baritone and euphonium (not forgetting the triangle) with interconnecting rhythmic patterns.

Theme A returns, fuller in texture this time at Rehearsal Letter C with a bouncing bass line, then gives way to Theme B, now with a busier accompaniment.

The euph and basses (below) take the lead at Rehearsal Letter D with the music being taken up a tone with the reoccurring rhythmic theme.

After Rehearsal Letter E, more detail is added to Theme A with some quaver interplay between the trombones and back row cornets/solo horn, which will need knitting together carefully.

The music builds in texture from Rehearsal Letter F onwards (below) with the jaunty quavers throughout the band, combined with statements in the trombones and basses.

The dynamic drops subito to build up intervallically and dynamically to a lively, rhythmic fortissimo finale.

The tam tam is struck and allowed to ring, taking us into the next movement.

II. Winter in the Dales

An atmospheric introduction, modal in nature with a statement of 5ths (inverted 4ths) in the repiano and soprano (below), with a dark bass motif of 2nds creeping below and above the tonic D.

Weʼre definitely in the depths of winter!

The music then builds through a dramatic chordal sequence filled with ascending quaver figures in the middle of the band to a robust D minor chord.

This eventually settles through a yearning repeated falling minor 2nd to the main theme of this movement based in G minor and heard chorale-like in the cornet section.

There is some lovely dark, low writing for the back row here - good balance and intonation must be observed for this section to work effectively.

The second half of this theme - repeated following a restatement of the dramatic chordal sequence - is at a slightly slower tempo and the movement closes with subtlety in the horns and lower band with a final tierce de picardie.

The mezzo piano tam tam is allowed to ring; again, giving us an audible cushion into the next movement.

III. Spring on the Lakes

Yearning 2nds/9ths and suspended chords feature in this tranquil movement.

Arpeggiated figures are heard in the band texture with rippling, undulating triplets in the euphonium. Basses play a key role here with open fifths - careful tuning and balance required!

The flugel has a falling second motif (below) complementing the euphonium, with horns adding interest with quaver interjections in fourths. All this leads to the main theme of the movement in the solo cornet (below) at Rehearsal Letter G.

Suspension is the order of the day in both the melody and the accompaniment which leads to a lovely warm, searching feel to the music.

The music never loses its sense of flow and there is always rhythmic detail passed throughout the texture.

The euphonium (marked tutti) takes the melody at Rehearsal Letter H, but sharing a dialogue with the flugel and supported by chordal accompaniment in the back row cornets (below).

There are some friendly minor 7ths and 9ths which help to create music you want to dip your toes into.

The solo euphonium takes over the melody with a beautiful stretching phrase which hands over to the flugel to continue with the undulating triplet motif.

The horns (as Dean Jones writes) have a ʻmoment of tensionʼ, 5 bars before the end (bar 174) of the movement which is resolved in the following bar.

The music comes to a calming close with another percussive effect (bar chimes on this occasion) providing a link to the final movement. Balance and intonation are fundamental to this movement.

Allowing the suspensions to breathe and integrating the flowing rhythmical lines will help to give the music life.

IV. Summer on the Quays

The final movement marked con energia =152, has a lively syncopated fanfare-like opening (above).

There is a breezy fluttering of flags in the horn/euphonium trills and the bustle of the quays is brought to life in the syncopated rhythmic phrases of the cornets and trombones combined with the muscular bass figures.

The main theme (marked con moto, though still =152) is heard at Rehearsal Letter I in horns and baritones (below) and is a pushed accent variation of the ‘Heralding the Dawn’ motif, underpinned by an energetic percussion section and driving structure in the bass and back row cornets.

Itʼs important to ensure that rhythmic cohesion is achieved between sections of the band (to cite just a couple of examples: bar 198-199 will need careful attention - as will bar 206).

The molto rit will also require control as the semiquaver passages take us into the Maestoso at bar 213 (below).

This is marked =152, but effectively half the previous tempo as it has a two-in-the-bar feel and the rhythm is augmented.

The theme in the horns and baritones is broadened here; and, although marked mezzo forte, it is long and sustained and will require good control throughout.

It will be important to keep the momentum and flow during this section - the music mustn’t sag - and the right balance needs to be struck between ensemble and percussion.

Trombones have a unison C pedal whilst horns remind us of earlier tension and colour.

A subito piano builds with a strong rhythmic pulse on a C pedal with rising triads in cornets, taken over by the rising tone unison of the trombones and short motif in the flugel.

The basses take us into the molto rit with a strong triplet statement, and the trombones give a final flourish in the penultimate bar (below).

After a quaver break before the bar line in the middle and upper band - to allow a tenuto bass crotchet to speak, the piece ends on a vibrant C major chord.

This will, Iʼm sure, prove an enjoyable piece to work on for both conductor and band as there are some lovely moments (and some busy moments) for all sections of the band.

The potential is in the score to paint some wonderful pictures for the audience. I, for one, am looking forward to listening to it.