4BR Editor Iwan Fox looks forward to his trip to the Australian National Championships in Perth this weekend. 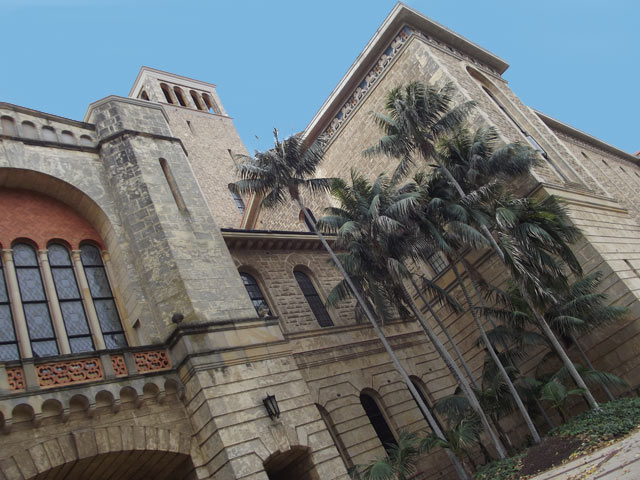 Winthrop Hall at the University of Western Australia in Perth

The 2013 Australian National Championships will be taking place this weekend at the University of Western Australia in Perth.

The excellent facilities at the University’s Winthrop Hall will provide the venue for all the main events, which will reach a climax with eight A Grade bands competing for the National title on the set work of ‘The Devil and the Deep Blue Sea’ as well as their own choice selections.

It is the first time that the Nationals have been back to Perth since 1979, and there is a great deal of excitement in the local banding community for an event that also encompasses the various National Solo Championship categories, a fine gala concert and the wonderful parade of bands on the Saturday through the streets of the city.

Richard Evans has been given the task of adjudicating the top section bands at the Callaway Music Auditorium. The A Grade action starts on Friday 29th March with the competitors getting to grips with their hymn tune choice and set work performance, followed on the Sunday by their march and own choice selections.

4BR will be in Perth, as Iwan Fox and Anthony Banwell bring you a flavour of the championships as well as teaming up with our friends at brassbanned.com who are streaming the action live on the internet.

For additional information about the 2013 Australian National Championships, please go to: nationalbands2013.com/

There is a solid looking line up of A Grade contenders, with Dr Robert Childs leading local favourites The Royal Agricultural Society of Western Australia Brass, as they seek to lay their hands on the famous Fireman’s Helmet National Trophy, which was first presented in 1971.

They are up against seven rivals, headed by pre-contest favourites and former champion, Brisbane Excelsior conducted by Howard Taylor, who have won this title on five of their last six appearances.

Marieka Gray has flown in from the UK to direct South Brisbane Federal Band, as they look to claim their first title since 1958, whilst former Grimethorpe principal cornet Tom Paulin leads Darabin City Brass.

The third Brisbane based challenger comes in the form of Brisbane Brass conducted by Bill Barker, whilst K&N Spring Gully will be looking to secure their first National title success since 2002 under the baton of Dr Kevin Cameron.

The consistent Footscray Yarraville City Band under Phillipa Edwards will be looking to improve on last year’s fourth place as they seek to recall memories of their great ‘triple crown’ success at the championships 30 years ago, whilst Tanunda Town makes a welcome return to the contest for the first time since 2005 under David Polain.

Although there are just three bands competing in the B Grade event, there should be plenty of great music to enjoy as the trio tackle Simon Dobson’s wonderfully evocative ‘Lyonesse’ as the set work, before showcasing their own choice selections.

Last year’s runner-up Toronto Brass, led by Timothy O’Hearn is the possible pre-contest favourite, although they will expect a strong challenge from City of Greater Dandenong under Michael Mathers and Canning City Brass directed by Dr Geoffrey Lowe, who came 5th and 7th at the 2012 event.

Four bands line up to battle it out in the C Grade event, where adjudicator Mark Ford has the task of finding out who is best on the set work, ‘Northern Landscapes’ by Peter Graham and their own choice selections.

Marion City Band returns to defend its title under the baton of Veronica Boulton and will be favourites to do just that, despite what promises to be a strong challenge for last year’s fifth placed finisher Warringah Concert Brass, and the debutants of Geraldton City and Town of Victoria Park Brass.

Five bands line up to tickle the fancy of adjudicator Mark Ford in the D Grade contest, with last year’s third placed finisher Warriparinga Brass the only returnee.

They are up against four bands that are either making their debuts or haven’t competed at the championships for well over a decade in Bunbury City, Bussleton Brass, Goldfields Brass and The Challenge Brass Band.

Just the one band in the Junior section (and no bands in Junior A or B), so a chance to relax and enjoy a winning performance without the added pressures of worrying about rivals for Morawa.