4BR's Chris Thomas looks back at a contest won by Hepworth standing head and shoulders above their rivals. 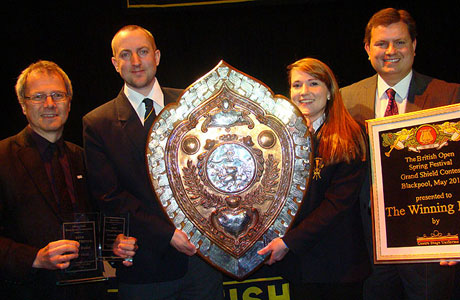 Standing on the shoulders of rivals: Hepworth makes a quick return to the British Open

There is an added insult to relegation injury suffered by losing your place at the British Open: It’s the demoralising prospect of a seemingly never ending series of visits to experience the aroma of stale fish and chips and windswept delights of Blackpool each May.

Just ask Leyland or Reg Vardy, two bands that have recently endured past battles to regain their Symphony Hall status over periods of four and three years respectively: It must have felt like thirty or forty.

As fine an event as the Spring Festival has become cocooned within the cosily familiar confines of the Winter Gardens, the notoriously tough task of reclaiming a lost British Open berth at the first attempt remains a task that fills even the most confident bands with a sense of knee trembling trepidation not even a randy stag night reveller would enjoy.

For Hepworth then, the joyous celebrations of Grand Shield success were very clearly tinged with a huge dose of relief after Russell Gray inspired a swaggeringly confident and skilfully engineered performance of Peter Graham’s ‘On the Shoulders of Giants’.

This was a return ticket booked in a fashion that literally stood head and shoulders above the competition.

It was also an interpretation that elicited appropriately high levels of praise from adjudicators Bob Childs and Malcolm Brownbill too; describing it as revealing a telling combination of power, detail and delicacy.

Few in the well populated audience that enjoyed a variable competition, would have disagreed.

The 2010 Open test piece certainly challenged the 20 competitors in terms of stringent technique and musical nerve, but as had been the case at the Open two years ago, it was the marked stylistic contrasts of the three movements, traversing Bruckner, Herbert L Clarke, and Arthur Pryor via Tommy Dorsey and Miles Davis that proved to be the most taxing concept to overcome.

The ability to metamorphosise from the majesty of Bruckner and the blazingly precise delivery of the Chicago Symphony Orchestra’s legendary brass section, to the relaxed smoke filled haze of a New York jazz club proved to be an elusive one for many MD’s.

The ensemble balance in the opening ‘Fanfares’ and the technical traps of the latter Vivace and the Misterioso of the ‘Fantasie Brillante’ caused many a problem throughout what was an enjoyable and absorbing contest.

As an eager audience in the Opera House waited for the results, Bob Childs gave an admirably detailed and informative summary of the adjudicator’s thought process on a piece he knew in immense detail.

He was certainly impressed by the vital contribution that the soloists made to the top six performances, all of which he said would have ‘held their own at the Open’.

Tellingly though, he added that the central ‘Elegy’ was the easiest of the three movements to judge, with only the best bands finding both atmosphere and security amidst the perilously exposed scoring.

With Mike Kilroy emerging temporarily from retirement to make a magnificent contribution on euphonium and Peter Moore despatching the challenging trombone solo in the 'Elegy' with consummate style and musicianship, Hepworth had all the essential elements in place from start to finish.

There was monolithic majesty in the opening Fanfares, with a full blooded sound that never strayed across the boundary into the overblowing that Bob Childs was vocally critical of in a number of performances.

In addition, Russell Gray’s contribution was one of interpretative stature; the contrasts and architecture of the score navigated in the most convincing fashion.

It marked Hepworth out as a band wholly worthy of regaining its place at the British Open. On this form they will not be in any danger of making a return to Blackpool anytime soon. 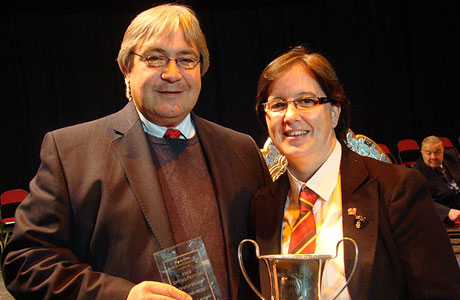 Much post contest debate surrounded the judges pre-draw comments that they would be paying very close attention to the bands from the number 1 draw onwards- as if in any other circumstance they wouldn’t?

As a result the odd conspiracy theorist tried to have a bit of a field day, but the reality was rather more prosaic.

Seindorf Beaumaris under the baton of the energetic Gwyn Evans were the surprise package of the top six.

However, the band’s principal players were amongst the most solid of the whole contest, with solo trombone Jos Harris picking up the ‘Best Instrumentalist’ Award for his stylish contribution in the ‘Elegy’.

Their achievement is claiming a place at Symphony Hall in just three years should give hope to any band that competes here.

A touch of luck perhaps followed them this year, but such has been their progress under their inspirational MD that it shouldn’t come as a surprise given their recent top flight record of achievement.

With serendipity always playing a role in the ultimate outcome here, Flowers will have left for home reflecting on their lack of it, despite giving a muscular performance under Paul Holland that possessed a stamp of class, but ultimately not a stamp of no 2013 Blackpool return.

The opening movement hit you between the eyes, but crucially with a sense of majesty and grandeur, whilst the detail and clarity of the Vivace was carried into the final movement.

The delicacy displayed in the ‘Elegy’ was executed with equal care.

It was hard to think of them being able to play much better and not gain reward at this level. 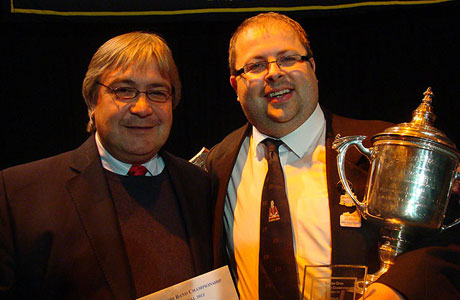 Just missing out in third: Flowers still manage a smile

Third is the cruellest finish here, although Exchange Communications Whitburn will have felt no better about coming fourth. Their Grand Shield stay will now move into a third year.

Ian Porthouse’s interpretation was, as always, one of understated perception, but despite the classy approach the noticeable little slips were to cost dear, notably in the ‘Elegy’.

Behind them came two of the most vivid accounts of the day, with Redbridge and Tongwynlais Temperance completing the top six with exciting, if somewhat erratically executed renditions.

There was some glorious playing on show at times though (a great Redbridge flugel and some fizzing cornet work from Tongwynlais), but the high energy levels and total commitment couldn’t quite mask the occasional rough ensemble patina that just took the gloss off with Symphony Hall almost, but not quite within touching distance.

Behind the top six (who most informed listeners had clearly ahead of the rest of the field) , the standard did vary – with the bands that ended in the midfield placings all delivering performances of artisan merit.

None really had enough in depth quality to have pushed higher than they eventually did though, although the likes of Marsden, Milnrow, BTM and Jaguar confirmed the permanency of their recent good form.

Below them came the inconsistencies of approach and execution from Pemberton down to Newstead, whilst the bottom four of Staffordshire, Skelmanthorpe, Freckleton and Aveley & Newham could have little cause for compliant that they dropped through the relegation trap door.

True to form then, the 2012 Grand Shield brought with it the customary mix of high emotions, joy, despair, thrills and spills.

However, for Hepworth and Seindorf Beaumaris, September’s trip to Symphony Hall will see them hopefully standing on the shoulders of giants once again.