Which of these 12 bands will be inspired by the history of the Olympics to gain a place at Cheltenham? 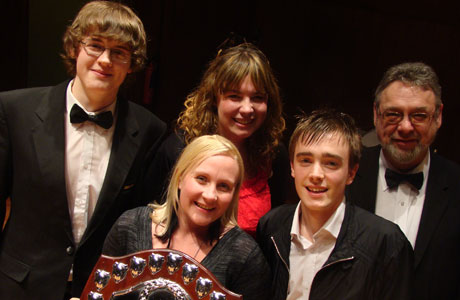 Victory for Victoria in 2011

Yorkshire’s long wait for a Third Section National title was ended in splendid fashion in Cheltenham last year, when City of Bradford delivered a thrilling winning performance under the baton of Lee Skipsey.

18 years since Skelmanthorpe took the honours, and with only one podium finish to the county’s name since 1999, Regional Secretary Peggy Tomlinson unfurled her White Rose flag as Yorkshire celebrated claiming both first and second places.

Plenty for these 11 contenders to live up to then if they are to get through on a testing set work inspired by ancient Olympian themes.

Proud Yorkshire folk like to think they are bigger and better than their rivals, so it will be interesting to see if they can make a better go of being faster, higher and stronger too.

Just the Gold and Silver medal winners go through to Cheltenham, so there is plenty to play for, and plenty for tuba star Ewan Easton and experienced campaigner Mal Brownbill ( both right) to enjoy in the box.

Not a great deal of early season form to go by, but three contenders did put in solid performances at Butlins, with the talented Garry Hallas leading Emley to 5th place.

They were relegated from the Second Section last year so will be keen to build on that encouraging Skegness outing.

Dronfield CMW now flies the White Rose flag with pride on its contest travels and with good cause too after they claimed a Fourth Section National Finals appearance and promotion last year.

They came 9th in Cheltenham, but showed that they had built on that at Butlins where they impressed many in coming 6th against a strong field of rivals.

Life after the cameras

2011 Fourth Section champion Dinnington has shown that there is life after the television cameras have long gone.

They just fell off the pace a little at Butlins, but shouldn’t be discounted here.

The improving Lofthouse 2000 is another band that brings some early season form to Bradford after coming 5th at Brass at the Guild Hall, whilst Skelmanthorpe B, rounded off last season with a 7th place finish at the Northern Open.

Both bands put in solid performances last year in coming 5th & 7th respectively, so should be confident of at least making a mark on the top six this time around.

Gawthorpe Brass ’85 fell five places in the results table last year, but has a solid record to maintain under the baton of John Edward, whilst Huddersfield & Ripponden directed by Alan Coe has been making steady progress in the last two years following promotion from the Fourth Section.

2010 Fourth Section champion Worsborough Brass will look to carry on their solid development under John Hopkinson, whilst Thurcroft Welfare will be looking to do the same after coming 10th last year.

That leaves Rockingham who won here in 2008, but who fell through the Second Section relegation trap door last year.

They will be looking to make an immediate mark, whilst the short priced favourites for the title may well be Elland Silver.

The great James Shepherd leads a confident band who will be looking to claim a Cheltenham qualification place after coming 4th last year.

A hard one to call with a field made up of so many bands that have either been promoted or relegated in the past 12 months.

Elland has been attracting the punters money at the bookies and should be the band to beat, although we think they could be pushed all the way to Cheltenham by a confident trio of Emley, Dronfield and Dinnington.

Lofthouse 2000 and Skelmanthorpe B should make up the top six, with our dark horse of Rockingham the ones to watch out for on the far rail.

*Competed in the Midlands Regional Contest up to 2010