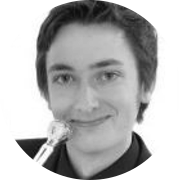 James is from Houghton-Le-Spring, near Durham and began playing baritone at Hetton Lyons Primary School at the age of 8. A Besson Performing Artist, James has garnered significant praise, recently being described as 'one of the leading young euphonium players of his time'.

James is the Principal Euphonium of the Leyland Band and was formerly 2nd Euphonium with the Cory Band. Graduating from the Royal Welsh College of Music and Drama with First Class Honours, James has performed all over Europe and Asia as a Euphonium Soloist. He has also tutored on Summer Schools in Northern Ireland and University Brass Days at Durham University and at Mahidol University in Thailand.

James has commissioned new works from Composers such as Tom Davoren and Paul McGhee as well as up-and-coming composers such as David Harrington (who's work Paradise Lost featured on Owen Farr's 'A New Dawn' CD) and the Cory Band's Composer in Association Christopher Bond.

In 2015, James was delighted to become a Besson Euphonium Artist.