4BR talks to a rare breed of young BBb tuba player — one who has his particular career choices well accounted for. 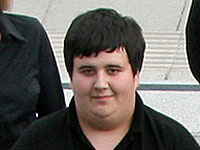 Ceri Parry Morgan is the kind of young man whose enthusiasm is infectious.

He bubbles with a passion for his love of music making – and tuba playing in particular.

However, he also has a very mature head on his broad shoulders.

Ask him about his future plans and a very surprising answer is revealed: “I want to be an accountant.”

Yep. That’s a bright and cheerfuln17 year old tuba player, who has just gained a place in the National Youth Band of Wales, is playing with a band that has qualified for the National Finals in Cheltenham and is out at least three nights a week and a Saturday morning in one band or orchestral rehearsal or another:

“I love playing the tuba, but I want to have a good career and try and play in a top class band – not the other way around,” he says with a matter of fact nonchalance, before a quick pause prior to the deliberate coda, “…and I really like the thought of doing accountancy.”

That mix of infectious enthusiasm and level headedness has served Ceri well, ever since he was handed a bass at Dyffryn Comprehensive School at the age of 12.

“I started on violin, but I didn’t think I was really going to any good at it, so when I was given the chance by my teacher Matthew George I grabbed it with both hands. I just knew it was the instrument for me.”

It was a good decision to make too.

The tough Sandfields Estate in Port Talbot hasn’t really gained a reputation over the years for producing a stream of well known violinists – although top class bass players are to be found literally on his doorstep.

“Cory’s principal BBb bass, Fraser Bish lives just a few minutes away,” Ceri says, “so I knew I wasn’t going to be seen as odd carrying my bass home with me from school.”

Since then he has worked hard and his playing has progressed - thanks to that level headed ability to seek out experienced help.

“I owe a lot to people like Wayne Pedrick and Jeff Pearce who take the West Glamorgan Youth Brass Band and Youth Orchestra on the weekends. They’ve really helped me with my playing, ever since I started in the Beginner’s Band in 2006.”

He has also sought out further knowledge of the black arts of tuba playing from experienced campaigners in the foundation building department at each of the bands he has played with.

“Nigel Buist at Pontardulais really taught me a lot – like how to play properly and not just sit there and try and blow the roof off. Now I know just when it’s right time to pedal, how to stagger breathing with a partner and when to give it a bit more welly! There’s much more to playing a BBb bass in a band than you may think!”

There is much more to Ceri Parry Morgan in fact.

“I’m really ambitious, but I know I’ve got such a long way to go before I can make the step up to the very best bands. I hope to be able to combine my studies and my banding in the future so I can do what I want to do.”

“My strengths I think are my sound and my stamina, but I know I have to work on my technique,” he said modestly.

“I practice from the Arban and I’m working on some solos, but I’m hoping to get some lessons from the likes of Simon Howells at Cory and Matt Routley on the National Youth Band course this year – just to keep improving.”

Playing with better bands has also helped a great deal, and he is looking forward to his first National Youth Band of Wales Course this Summer.

“We’ll be playing ‘Red Priest’, which is an awesome piece, and I can’t wait to hear David Childs playing with the band. I can’t believe some of the things he can do.”

As for the pieces already under his belt?

That infectious enthusiasm bubbles to the surface again: “I enjoyed playing ‘The Dark Side of the Moon’ a few years ago and ‘Diversions on a Bass Theme’ with Pontardulais at the First Section National title at Harrogate – but there are so many test pieces I would love to play.”

Ceri has had his first taste of the pieces that form the staple diet of the very best bands. “’Les Preludes’ was a huge blow and I’ve had a look at ‘A Tale As Yet Untold’, which is amazing.”

So no music college then to help fast track him into the likes of Black Dyke or Cory?

That serious level headedness comes into play once more.  “I love music, but I really want to go to a university that does a good accountancy course."

However, an enthusiastic hint of mischief surfaces: "If that just happens to be near Black Dyke, Brighouse or Cory,” he adds, “I may knock on the door and ask if they will allow me to come and have blow! I would love to be able to play under David King or Bob or Nick Childs – even as a one off to start!”

This very personable, bright, articulate young man, laughs at his own ambition – although you sense he has already made sure he knows just how far away each of the bandrooms are from the universities he has drawn up on his short list.

Would be accountants tend to do that sort of thing.