Which of these nine runners and riders will be making a celebratory song and dance of it at the Dolphin Centre on the weekend? 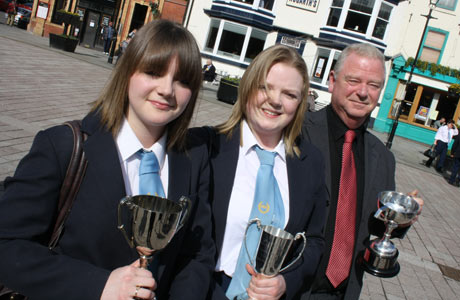 There are encouraging signs in the Fourth Section that hard work, encouragement and sheer talented enthusiasm is starting to pay off in the North of England – despite only nine bands making it to the starting line this year.

There is no Craghead, Spennymoor or Stape, but despite the fall in numbers there is a distinct feeling that things are looking up at the foundation level in these parts, with some great work being done in a host of band rooms by committed conductors.

It wasn’t a great year for the qualifiers at Harrogate in 2010 – the two representatives coming 12th & 15th respectively after consecutive top ten finishes for at least one band in the last few years.

Hopefully, the two that do make it to Cheltenham by impressing David Lancaster (right) in the box will make a mark – although they have to overcome a tricky, but highly enjoyable set work here first.

The runners are headed by Backworth Colliery who has started to find real form here in the past couple of years and just missed out on a trip to the finals coming 3rd last time out.

Durham Constabulary meanwhile will want to start to bounce straight back to winning ways after suffering two consecutive relegations.

They last qualified in 2004, so a finals return is overdue.

Kingsway Printers Cleethorpes is perhaps the busiest contesting bands competing this weekend and came 6th at the Leicester contest as well as 12th at Butlins at the start of the season.

They last qualified in 2009 and came 8th last year.

Knaresborough Silver made a highly encouraging debut last year when they worked their socks off to come 7th, so it’s great to see them back in action, whilst Lanchester has been coming here a bit longer.

They have also grown in confidence over the last four years, although they fell away a little in coming 11th last time out.

The tremendous youngsters at NASUWT Riverside Concert had a great time at Harrogate despite coming 15th and will be keen to make it another weekend away trip.

They have made excellent progress since making their debut four years ago. This year they are led by the experienced Brian Tait, who certainly knows a thing or two about winning area titles.

Steve Robson continues to do wonderful work with Stanhope Silver as they look to improve on last year’s encouraging 6th place, whilst Swinton & District Excelsior will also be looking to make a move up the results table after dropping to 10th after coming 3rd in 2009.

That leaves Trimdon Concert who last qualified for the finals in 1999 but who has been putting in solid performances here over the last few years.

A hard one in anyone’s book, but we opt for Backworth Colliery and the youngsters at NASUWT Riverside Concert to make it to Cheltenham, although they will be pushed all the way by the likes of Kingsway Printers, Durham Constabulary, Knaresborough Silver and Trimdon.

Our dark horse is Stanhope