As always there is a healthy field of contenders battling it out for the qualifications and a bit of a celebratory song and dance afterwards. . 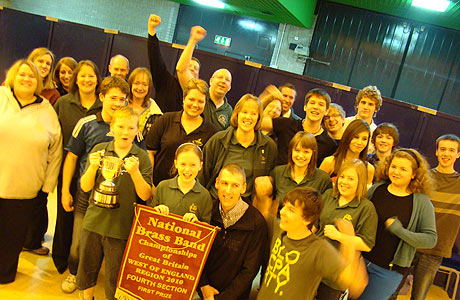 Derek Broadbent and David Lancaster (right) may wonder what they have let themselves in for when they first look at the list of 22 bands taking part in the Fourth Section contest on the Saturday.

However, they won’t be wondering in apprehension about the standard of playing on offer, that’s for sure.

That is invariably very good in these parts – as seen by the list of qualifiers that have gone on to not only make a mark at the finals, but also blossom as they have moved up the sections too.

Despite 2009 champion St Breward currently on gardening leave from the contest, there have been real success stories to report for 2008 winner Brunel Brass (who went on to claim a National title) as well as former title holder’s Verwood Concert Brass and St Dennis, and qualifiers such as Portishead Town and Camborne B amongst others.

It really is a hot house breeding ground of talent, and despite losing Cheltenham Silver, Lostwithiel and Spinnaker Brass this year, they have been replaced by debutants Andover and returnees, Bidefod Town, Gosport Silver, Midsomer Norton & Radstock Silver and Tiverton Town.

They were only formed a short while ago and are dipping their toes into the contesting waters under the experienced Steve Large.

One of the form contenders is sure to be AW Paker (Drybrook) under Kevin White – winners of the GBBA, Gloucester and the Welsh League contest at Blaenavon in recent months.

They just missed out on a finals place last year and won’t want to do the same again. If they play to form, they won’t.

Bratton return after missing out last year and last qualified back in 2004, whilst Chalford Academy will want to reverse the drop off the pace they suffered last year as they look to get back to better days under Steve Tubb’s excellent direction.

Gosport is another welcome returnee – last competing in 2008, whilst Hatherleigh will surely want to return to the National Finals after their fine qualification last year.

A year on David Hayward has been brought in to work his magic once more. It may pay off again too.

David Dobson brings his improving Launceston Band for another crack on the back of a 5th place finish at the SWBBA contest, whilst Marshfield is an improving outfit looking to break into the top ten after last year’s encouraging 12th place.

Midsomer Norton & Radstock Silver returns after a five-year break under the baton of Joanne Sykes, whilst New Forest Brass could be a band to watch out for after winning the Wessex contest and making a huge leap up the results table last year.

Okehampton Excelsior returns for a second successive year looking to build on their encouraging podium finish at the SWBBA event, whilst Porthleven Town will be looking for their first finals trip since 2005 and also build on an encouraging SWBBA result.

Shanklin Town has been making good progress and will be looking to book their place at Cheltenham if they can push on from last year’s 5th place, whilst Swindon Brass last qualified in 2005 but will look to build on their podium finish at the SWBBA Torquay event.

Great to see Tiverton making an appearance – and they could well be the dark horse of the field given their non regional contesting record of late, including a win at the SWBBA contest, whilst Torbay will be looking to take the first steps back up the sections following their relegation from the Third Section.

Totnes enjoyed a podium finish at the SWBBA contest just behind Tiverton, so should be confident of returning to the finals for the first time since 2008, whilst Verwood Concert B, returns after their encouraging performance last year in coming 14th.

That just leaves the three bands that start with a W – headed by Wight Brass, who came fine 6th last year on their debuts and was runner up at the Wessex contest late last year.

They should be confident of perhaps pushing for a qualification place, whilst Wilton & District will want to try and claim a top ten slot after a disappointing 16th place last year.

Meanwhile, Wincanton Silver will not want to prop up the field after their relegation from the Third Section as they look to gain a finals qualification berth for the first time since 2008.

With such a large list of well-matched bands, this is perhaps one of the most open contests of the entire 2011 regional championships.

However a few bands may well be fancying their chances more than most, with AW Parker on particularly impressive form. Look out too for Hatherleigh, Shanklin and Wight Brass, with New Forest Brass and Totnes in the mix too. Tiverton Town could well top the lot though as our dark horse.

Verwood Concert B
Conductor: A. Clarke