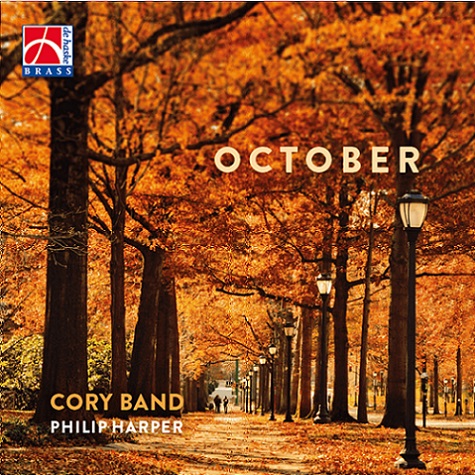 It's usually a very successful sales strategy too.

In the banding world Obrasso has done it with Black Dyke for several years, whilst this is the second recording link Cory has undertaken with the publishing group de Haske.

It’s an astute bit of marketing (all 13 works are exclusively distributed by Hal Leonard via their retailers or on-line) – a clever hybrid CD balance of product placement, performance excellence and polished salesmanship.

For instance, test-pieces from Jan de Haan and Thierry Deleruyelle will certainly prick the interest of contest organisers as well as ambitious bands: ‘Hermitage’  and ‘Compostela’  (which has already been used at the Belgian National Championships) both colourful, melodic and engaging.

It’s an astute bit of marketing (all 13 works are exclusive distributed by Hal Leonard via their retailers or on-line) – a clever hybrid CD balance of product placement, performance excellence and polished salesmanship.

The same goes for the concert items: Philip Sparke providing a brace of fine arrangements of Eric Whitacre’s ‘October’  title track, as well as the touching ‘Sarabande’  and slightly inebriate ‘Polka’  by Sir Malcolm Arnold.  In addition, his ‘Till We Meet Again’  is a tenderly touching memoriam, whilst Jan Van der Roost’s ‘Hypernikon’  is a strikingly effective opener.

Both solo features are brilliantly presented by Tom Hutchinson and Glyn Williams, whilst Christopher Bond’s star will surely rise further boosted by sales of the tasty bon-bon arrangements from Bert Kaempfert, Adele, ‘Dreamgirls’ and ‘Hairspray’.

They all tick the easy listening variety box (buffed and polished by Philp Harper and his band), although Etienne Crausaz’s ‘Banana Island’  has the uncomfortable feel of being inspired by the television theme tune to a 1970s holiday programme.  It’s got the same authentic colouring as Judith Chalmers’ suntan.

That may be just the one to be wrapped up and sent to a distant banding relative as an early Christmas prezzie, although the rest certainly deserve to have more lasting appeal.