CD review: Recital Gems and Concert Classics for the Trumpet 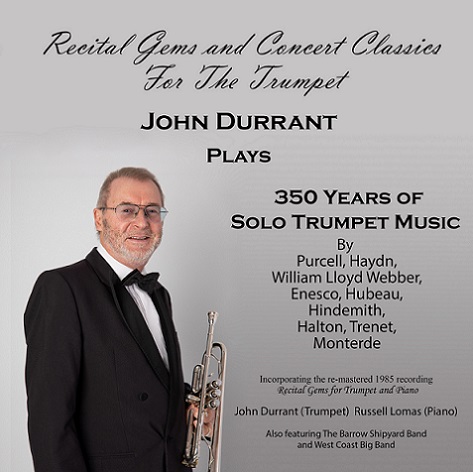 John Durrant has enjoyed a long and varied career as a successful professional trumpet player.

From the age of 14 its encompassed everything from baroque to jazz, symphony orchestras to brass bands.

His raw talent was moulded at the Royal College of Music, but the skill set was polished through seaside end of pier shows, orchestras and session ensembles, partnerships and outings with Bruce Cassidy, Miss World contests and even a musical version of The Bible.

In 1985 he released an acclaimed CD of classical works for the trumpet with pianist Russell Lomas, whilst in 2004 he linked up with the popular West Coast Big Band and as well as the now defunct Barrow Shipyard Band who he also conducted.

This neatly remastered release brings those elements together; the process undertaken with considerable care by Mint Audio Restoration. It provides a welcome opportunity to hear a fine player showcasing a considered appreciation of repertoire with a 350 year arc of inspiration.

Durrant is a highly accomplished executor – especially of the filigree delicacies of Purcell and Haydn which have a light touch of ornamentation.

Durrant is a highly accomplished executor – especially of the filigree delicacies of Purcell and Haydn which have a light touch of ornamentation.

He also provides engaging interpretations of the recital classics from Enesco and two movements of the Hindemith ‘Sonata’  – each understated in profiled character; from the soft, grave and thoughtful to the furious, agitated and tense.

Mid-20th century excursions come with the third movement of Hubeau’s ‘Sonata’ that sashays like an old cowboy ambling into the dying sunset of a long forgotten western, whilst the Webber is a tuneful refinement of deceptive articulate simplicity.

‘Beyond the Sea’  is as French as a salty old matelot smoking a Gitanes whilst sipping a glass of Pernod in a boarding house bar in Blackpool.

Maybe John Durant enjoyed finding him there on one of his many eclectic musical excursions.