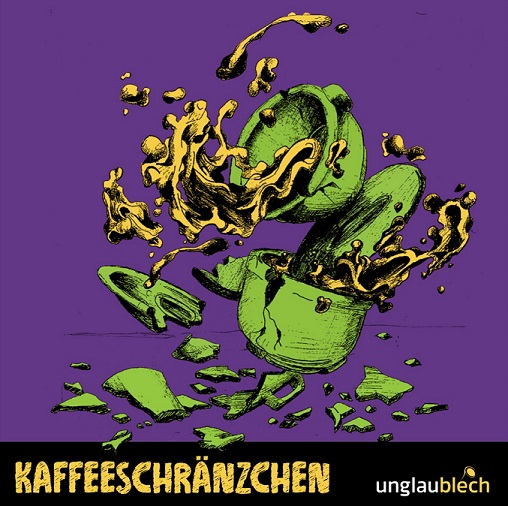 UnglauBlech is an eight-piece professional brass ensemble from Switzerland, who with remarkable understated insouciance describe themselves as ‘the slightly different wind ensemble’.

It’s a self-assessment that places them somewhere between the musical reserve of the Philip Jones Brass Ensemble and the anarchic mayhem of Mnozil Brass. It’s also a very effective niche for their talents – the players coming from backgrounds that embrace professional orchestras to brass bands.

‘Kaffeeschränzchen’  pinpoints their musical location on the performance spectrum (it must be one heck of a trendy coffee shop) - as colourful as their dayglo suits, yet tailored with a Saville Row cut of musical cloth that fits perfectly.

There is no pointless window dressing either - all ten tracks showcasing seriously adept ensemble and solo playing: sharp, clever and polished – from the acrobatic to the artistic, scintillating to the sublime. They do cool better than Steve McQueen in a polo neck jumper driving his Ford Mustang GT in the film ‘Bullitt’.

They do cool better than Steve McQueen in a polo neck jumper driving his Ford Mustang GT in the film ‘Bullitt’.

It does venture to pastiche oddness at times (the sleeve notes are anaemically skinny), yet crucially never crosses the line - from Shai Maestro’s surreally embracing ‘The Dream Thief’  to the sensual shenanigans of Piazzolla’s Buenos Aires tango intricacies.

The opening ‘There’s a Great Day Coming’  bubbles with evangelical energy, ‘Not Yet’  drives with a throbbing groove and ‘It’s So Hard To Say Goodbye To Yesterday’  has just the right feel of languid R&B reflectiveness. ‘Inakuyu’ - a Bolivian jazz inflected reflection that grows in intensive drive is an absorbing meander off the beaten path of familiarity.

There is further intrigue with ‘Stehaufmannchen’, a bit of two-part jazz classiness that evokes the spirit of ‘bouncing back’, whilst ‘Miss Purty’  is a banger of arrangement of Cory Henry’s coolest of cool soul king originals.

A careful appreciation of Eric Clapton’s ‘Tears in Heaven’ treads the finest of emotive lines, before things close with a honking arrangement of Eijiro Nakagawa’s ‘Trisense’, originally written as a virtuosic trombone quartet, which explodes in your face to leave you smiling in delight.

May 24 • Freckleton Band invite expressions of interest for the position of Musical Director. This aspirational 1st section band is looking to appoint a talented, enthusiastic and forward-thinking individual to lead the band on to the next level of performance.