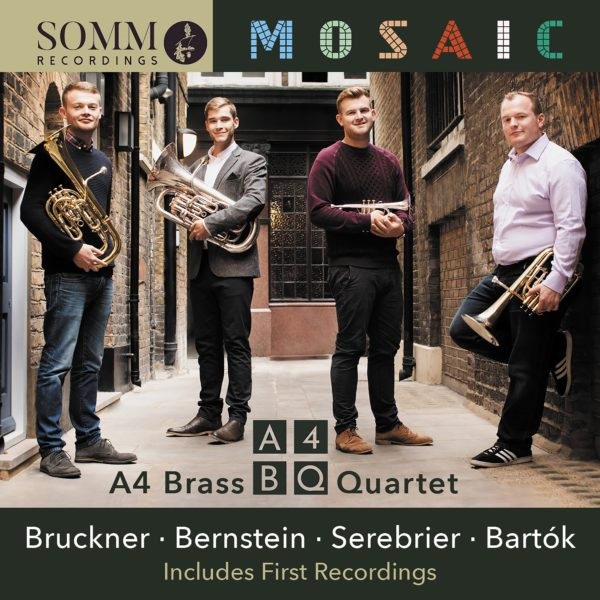 The textured colour palettes revealed by the application of tesserae to form large scale mosaic works are displays of individualised collective creativity.

It is a bonding process producing beauty from the integrity of technique; the figurative to the abstract, organic to geometric.

The processes involved in the A4 Brass Quartet’s own colourings owe as much to their ability to create delineated enticing grid patterns of tonality; the darker hues of the euphonium and baritone thinly separated from the lighter shades of the horn and cornet/flugel. Muted infusions create more complex, tinted pigments.

In that respect this absorbing release is perhaps more akin to the canvases of Mondrian and Rothko than ancient Mesopotamian and Roman floor patterns in inspiration - although the artistic result is equally as impressive.

The confident approach to the abaciscus elements - including four premiere recordings from composers Christian Overhead, Daniel Hall, Bramwell Tovey and A4’s own Jonathan Bates, is central to this.

Elsewhere, popular standards such as Kosma’s  ‘Autumn Leaves’  and Grainger’s  ‘Molly on the Shore’  sit comfortably alongside the repressed tenderness of Elgar’s  ‘Salut d’Amour’  and humility of Bruckner’s dedicative  ‘Locus iste’  to offer cameos of stylistic insight.

And whilst it is impossible to finesse the picaresque wit of  ‘Candide’  with such limited tonal sources, the darker hued murderous intent behind the notorious  ‘Black Dahlia’  killing is evoked with chilling immediacy.

Beware though into reading too much into the fact that this is the ensemble’s second outing into the world of murder mysteries after the unresolved ‘Bates Motel’ case on their last release. They are very nice lads.

Jonathan Bates’ own  ‘Toccata’, with its tasteful hint of Wilbyesque patten structures is a tessellated gem, whilst Kentaro Sato’s reflective  ‘Tsuna’nagari’  translates to the medium with thoughtful ease.

The trio of ‘suites’ also showcase the ensemble’s mature, encompassing musical outlook: Serebier’s  ‘Cuarteto’  is stylishly realised, its integrity maintained in a completely new form. It’s a pity though that we don’t get to hear the five (now six)  ‘miniature’  family portraits from the polished pen of Christian Overhead. His nephews and nieces must be a handful of delight.