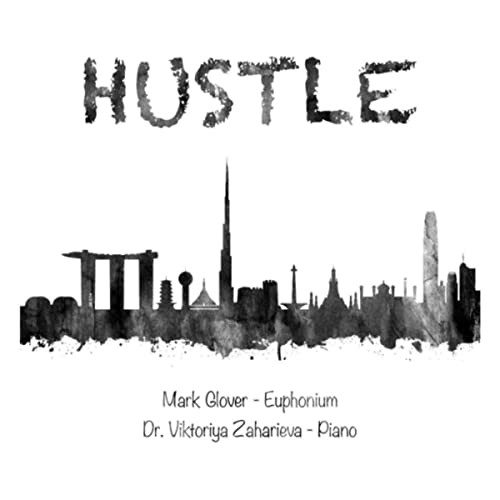 Hustle is an apt title to describe the current life of any freelance musician: graft and determination every bit as important as latent talent and ambition.

Gaining long term success is as much about seeking musical horizons as it is accepting career opportunities to ply your trade.

Mark Glover has sought both (the clever CD cover references it); living and working in Singapore between 2012 and 2016, where he combined being a lecturer at the Nanyang Academy of Fine Arts with a busy solo career, before embarking on a new chapter in Dubai as head of music at one of its leading international schools, where this CD was recorded.

He is now back in the UK, teaching as well as playing – hustling with what he says can be ‘edgy’ activity in a contemporary musical world that has just about emerged over its darkest horizon.

It’s an interesting, intelligently delivered recital from a performer of consideration (aided by a fine accompanist); the repertoire varied in scope and facility, focussed within the scope of Glover’s strengths as a player.

The centrepiece is a thoroughly absorbing ‘Euphoria!’  concerto by Zaidi Sabtu Ramli (arranged from its wind band form by the late Simon Kerwin), which holds its technical challenges within a triptych framework of subtle inventiveness of gamelan colourings, samba rhythms and dark edged explorations.

It’s an interesting, intelligently delivered recital from a performer of consideration (aided by a fine accompanist); the repertoire varied in scope and facility, focussed within the scope of Glover’s strengths as a player.

Elsewhere the Klezma inspired ‘Sholem Alekhem’  bends and bubbles, Asaad Hamzy’s ‘Scherzo’  is a quick-witted dialogue between soloist and accompanist, and ‘The Devil’s Tongue’  is a tasteful showcase of linguistic technique. ‘Euphtude’  is a solo study oddity that grows on you.

And whilst Faure’s ‘Pavane’  doesn’t quite work, Albert Ketelbey’s ‘Bells Across the Meadow’  is campanologist’s delight and Glover’s own ‘Through Her Eyes’  is a nicely realised exploratory riff. ‘Lullaby for Lucy’  is tender in its sincerity.

‘Hustle in Jozi’  to close is a vivid picture postcard of the hectic urban landscape of modern-day Johannesburg – or as dangerous and unpredictable as a day in the life of a current freelance musician.