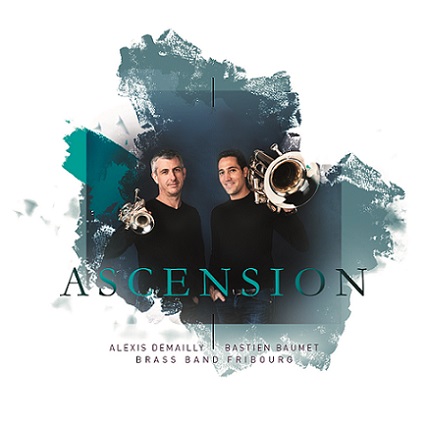 Two of the major performers that helped drive the rise of Paris Brass Band over the past decade or more show no sign of being satisfied with cruise control mode with their latest joint release.

‘Ascension’  comes seven years after their well received ‘Portraits’  debut, and rolls off the production line (recorded in January 2020) with playing on nine pieces that showcases facile technique under a richly polished buff of musical bodywork.

It has been well worth the wait. It is marque class playing of high quality repertoire, aided by the sympathetic, aware accompaniment of Brass Band Fribourg (the lack of repertoire notes though is a disappointment).

Demailly, who is the principal cornet at the Paris Opera as well as tutor at the Conservatoire National Superieur de Musique de Paris, is a soloist of subtle flair; considered, cultured and elegant. There is a mature vocal appreciation to be found in the dark sonority to his tone.

Meanwhile, Baumet, who combines his teaching in the capital with a busy freelance career displays a more obvious insouciance, worn with ease; extrovert, explorative and occasionally unexpected.  He is also blessed with a malleable tonality that adds an absorbing chiaroscuro quality to his playing.

The title track, inspired by Felix Baumgartner’s 2012 free fall skydive, sees the pair glides effortless on high before plummeting headlong back to earth in an eyeball popping scherzo.

Together it makes for an engaging complement in Fabien Cali’s intriguing ‘Ad Astra Overture’  - pulsating with mischievous spikiness, underpinned with intricate flow patterns, whilst the touching ‘Novella’, a short chapter of lyrical reflection, cleverly mixes their intertwining lines.

The title track, inspired by Felix Baumgartner’s 2012 free fall skydive, sees the pair glides effortless on high before plummeting headlong back to earth in an eyeball popping scherzo.

Elsewhere, Demailly is a commanding focal point in Peter Meechan’s darkly uplifting ‘Manchester Concertino’  (although the kernel idea in the opening movement is a minor third) - the central ‘Dream’  aching like a sad memory floating on a breeze of sub-consciousness.

Recall also plays its part in Howard Snell’s ‘Fantasy’, a tender homage to his father seen through the analogy of the passing seasons.

It is shaped beautifully by the soloist, whilst he brings a stark dichotomy of youthful emotions to the Shakespearian figure of Romeo in ‘Fortune’s Fool’  – doomed love pickled by headstrong testosterone.

​It is shaped beautifully by the soloist, whilst he brings a stark dichotomy of youthful emotions to the Shakespearian figure of Romeo in ‘Fortune’s Fool’  – doomed love pickled by headstrong testosterone.

Baumet’s commanding interpretation of Philip Sparke’s demanding ‘Euphonium Concerto’  is vibrant and colourful; a lucid appreciation of the stylistic nuance and flowing musicality that makes up each of the movements.

In addition there is an equally formative understanding of the building tension and ultimate release required in Peter Meechan’s ‘Ascent’, whilst he gulps the contents of ‘Neath Dublin Skies’ as quick as a thirsty navvy downing a pint of Guinness.