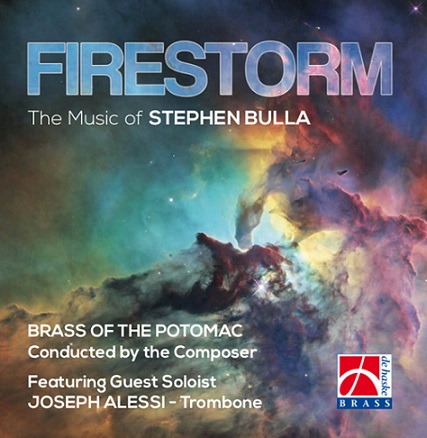 Stephen Bulla’s musical credentials are impeccable; underpinned by 30 years of service providing over 500 musical scores for different occasions for the United States Marine Band – ‘The President’s Own’.

It is some CV.

His skill set is comprehensive - from orchestrating Sousa’s last known manuscript to writing the music for NASA’s commemoration of the Apollo 11 Moon landing.  It is also one that has an unmistakable appreciation for the British brass band medium for which he has written for over five decades.

Bulla’s works bear the unmistakable hallmarks of expert craftsmanship; backed by a refined appreciation of melodic tonality and technical virtuosity that leaves nothing to waste.

The music is imbued with disciplined purpose and meaning - the title track inspired by the first Gulf conflict a considered appreciation of liberation - certainly no flag waving piece of military jingoism.

Throughout this enjoyable release, form and function weave together; from the brassy bravura of the opening ‘Into the Sky’, to his academic admiration of J.S. Bach, so inventively exploited in the polychromatic ‘Concertante for Band’.

Throughout this enjoyable release, form and function weave together; from the brassy bravura of the opening ‘Into the Sky’, to his academic admiration of J.S. Bach, so inventively exploited in the polychromatic ‘Concertante for Band’.

Elsewhere, ‘Festivus Americas’  is celebratory mini-overture of endeavour whilst ‘Decade Celebration’  has more than a hint of a pioneering spirit found in the widescreen film scores of 1950s Hollywood westerns – the band playing with warmth and balance.

Although the recording ambiance is very immediate it certainly helps focus appreciation on the glorious playing of guest soloist Joseph Alessi (who also features on the ‘Concertante’).

‘River Quest’  provides a rich rhapsodic canvas on which to paint the Appalachian tune, ‘Down to the River to Pray’; delivered with an evangelical acclaim that one moment is as broad and expansive as the Mississippi River and the next as intricately showy as the rapids of an Arthur Pryor solo.