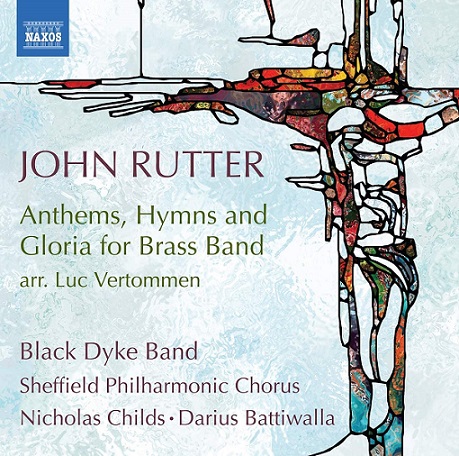 John Rutter’s compositions have become the ubiquitous musical backdrop to religious services and events, although by his own admission he is not a particularly devout man.

They are however undeniably inspired by a sense of spiritual understanding.

His popularity straddles both the sacred and secular, especially in the USA - the musical language transparent and easily understood. His craftsmanship is undeniable, although it has also attracted critical assessment in accusing him of sentimentality borne of facile melodic ease.

It is a reception familiar to composers who have enjoyed a wider scope of commercial success other than from writing solely for the brass band medium.

A degree of parochial envy will therefore accompany this Black Dyke release following its ‘Album of the Week’ promotion on the Classic fm radio station.

It would be churlish and unfounded.

Rutter’s profile will have undoubtedly driven sales, but the cash registers will not have rung in presto tempo on that alone.

The arrangements by Luc Vertommen are informed and discerning, the playing by Black Dyke equally so, with the MD drawing warm tonality from the ensemble to compliment the literate phrasing.

The arrangements by Luc Vertommen are informed and discerning, the playing by Black Dyke equally so, with the MD drawing warm tonality from the ensemble to compliment the literate phrasing.

The centrepiece is the setting of ‘Gloria’  - which amplifies the kernel of Rutter’s appeal in that it is essentially a secular concert work based on a religious text.

The balance between band and chorus is defined, enabling Darius Battiwalla to pace the music to its rhythmically emphatic conclusion.

Elsewhere the sounds of Rutter’s most popular works (covering the period 1974 to 2011) are richly coloured – from the jubilant fanfare opening to the familiar strains of ‘Two Hymns of Praise’  to the delicate sweetness of ‘A Clare Benediction’  and a lovely ‘Pie Jesu’  lead from Richard Marshall.

The MD’s sympathetic shaping never falls into saccharin sentimentality – a tightrope admirably mastered due to the familiarity (‘The Lord Bless You and Keep You’  and ‘This is the Day’  have gained worldwide appeal) and limited scope of the shorter arrangements (a couple of tracks do have a earworm Euro-pop backbeat).  ‘Distant Land’  in particular develops with emotive depth of character.

At a time when the very survival of brass bands in the UK is at an existential tipping point the success of this Black Dyke CD should be welcomed in reaching out to a musical public we lose connection with at our collective peril.

All works arranged by Luc Vertommen

April 12 • Percussionist required. Preferably with experience playing in Brass Band, Wind Band or Orchestra. We do not contest but play to a good standard and play a variety of contempory and historical music.