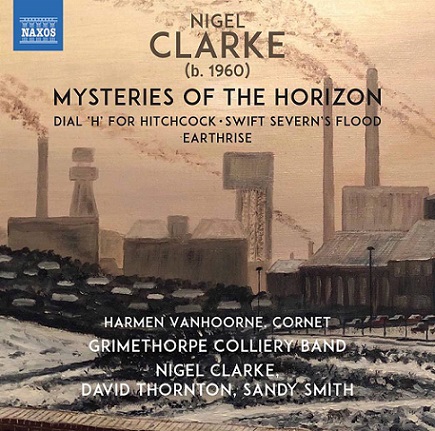 In an age when preconceived ignorance devalues debate, the surreal images of Belgian artist Rene Magritte remain wonderfully agnostic in the way they slyly undermine ingrained misconceptions of certainty.

Who else can make you believe that you get away with murder bypassing the laws of physics as in ‘The Menaced Assassin’, or that there is a fundamental conceit clinging to familiarity as in ‘The Dominion of Light’  (a scene he painted no less than 27 times)?

In Magritte's world view, nothing is as certain as it seems.

To him we are all bowler-hatted Mr Averages. We are left to seethe with misinformed vitriol beneath our identikit appearances at the perceived cultural vandalism of ‘The Discovery of Fire’  (painted in 1934), or the disintegrating peace of post war Europe in ‘The Flavour of Tears’  (1948).

All those hidden sentiments and more are also distilled into Nigel Clarke’s exceptional cornet concerto, ‘Mysteries of the Horizon’  (painted in 1955) which forms the superbly performed core of this thoroughly engaging, if occasionally inconsistently executed release from Grimethorpe.

Here, Harmen Vanhoorne is cast as the questioning everyman voice stepping into the heart of each Magritte frame; at times frustrated, vicious and strident, at others sombre, delicate and melancholic.

It is a stunning performance of commanding artistry and facility, rich in character (aided by reading Martin Westlake’s elegantly subverting poem) and intelligence.

Here, Harmen Vanhoorne is cast as the questioning everyman voice stepping into the heart of each Magritte frame; at times frustrated, vicious and strident, at others sombre, delicate and melancholic.

‘Dial ‘H’ for Hitchcock’  is Clarke’s homage to the film scores of Bernard Hermann, Dimitri Tiomkin and Franz Waxman - a ‘psychological thriller for brass band’.

Music was integral to the great director’s storytelling (think of the shower scene in ‘Psycho’) - infusing the immoral ambiguities of human nature into the mind’s eye with an immersive aural trigger mechanism; obsession, voyeurism and cold-eyed homicidal intent played out to screeching strings and discordant tensions.

Clarke revels in his own characterisation; from sashaying hourglass hips of peroxide femme-fatales to the sour aftertaste of stale alcohol and sweaty indiscretions that invariably lead to the frenzied horror of chilling murder.  It is a world premiere of engrossing film-noire imagery.

Clarke revels in his own characterisation; from sashaying hourglass hips of peroxide femme-fatales to the sour aftertaste of stale alcohol and sweaty indiscretions that invariably lead to the frenzied horror of chilling murder.

Shakespearean murderous intent has certainly inspired many film directors, and ‘Swift Severn’s Flood’, Clarke’s depiction of Sir Edmund de Mortimer’s battle with Owain Glyndwr in 1402, is bloodied and brutal - bathed, as were most excuses for 15th century indiscriminate slaughter, in monastic piety.

You can smell the fear and loathing in the air.

Power and piety of a different kind round off the release; and the man-made effort required to transport astronauts to the heavens. There they saw our blue planet floating in monochrome darkness – an iconic image captured by the ‘Earthrise’  photograph taken on board the Apollo 8 spacecraft.

It is an imposing work of energy and enigmatic beauty; from the thrust of the great Saturn V rocket at launch to the free-floating calm of orbit and that glimpse of the fragility of mankind thousands of miles below. The return, full of anxiety and glowing heat climaxes in a triumphant splashdown.

What Magritte would have made of it is anyone’s guess, but Nigel Clarke’s musical portraiture does it full justice.