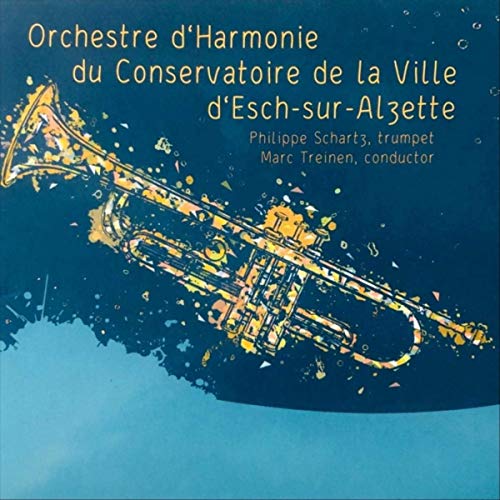 There is a heartfelt expression of gratitude that seeps through this enjoyable release.

Philippe Schartz started playing in his local village wind band in Luxemburg before his talent took him first to London, then New York and eventually Cardiff, where since 1998 he has been the acclaimed principal trumpet of the BBC National Orchestra of Wales.

His musical identity is known to millions – literally so, as the orchestra not only maintains a busy international concert schedule, but is heard as the accompaniment to much of the BBC’s most popular television output.

This then is something of a personal thank you to the student conservatoire (under present conductor Marc Treinen) that helped set him on his professional musical career.

Not surprisingly Schartz performs with the type of relaxed polish that comes from the years of hard-yakka practice and insightful experience working alongside great conductors and fellow musicians.

Everything is technically assured, effortlessly paced and subtly styled. He also has the priceless ability to encompass the full spectrum of tonal liquidity - from oily tar to brazen shimmer. It is the mark of a player of the highest rank of class.

Everything is technically assured, effortlessly paced and subtly styled. He also has the priceless ability to encompass the full spectrum of tonal liquidity - from oily tar to brazen shimmer. It is the mark of a player of the highest rank of class.

The famous Goedicke ‘Etude’ is given the type of academic consideration that should be afforded to it by any conservatoire trumpet student, whilst Bohme’s popular ‘Concerto Opus 18’  is performed with a sharply observed sense of character.

Elsewhere, the darkly sinister ‘Cold Comes the Night’  has a touch of James Bond villainy to the soundscape with Vassily Brandt’s ‘Concertpiece No 2 op 12’  imbued with a fair dollop of romantic imperial majesty.

The lollipops of Arban’s ‘Carnival of Venice’  and Bellstedt’s ‘Napoli’  are played with respectful tastefulness – the technical fireworks controlled yet still retaining the heat of their sparkle even in the stratosphere.

The admirable accompaniment is compact, coloured and balanced throughout, the students revealing their own considered artistic nous and nuance with the delightful ‘Hans Christian Andersen Suite’.