CD review: Spot on! The Next Generation of Euphonium Music 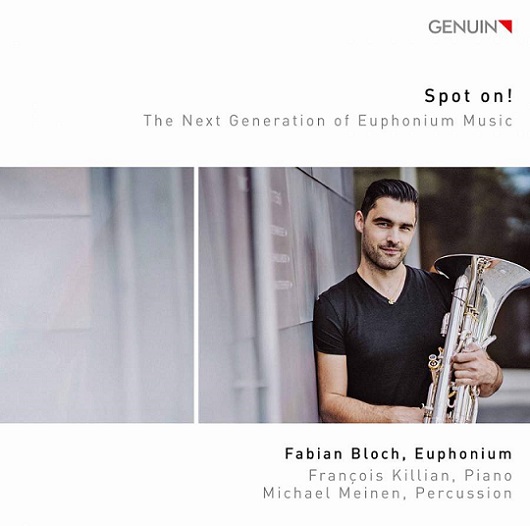 Listening to the latest CD from euphonium player Fabian Bloch is like sitting down in the living room of a Corbusier inspired Swiss architect.

There is a cool minimalist detachment about everything that surrounds you - expertly engineered form and functionality designed by a very specific musical intellect.

The series of world premiere recordings of works either written for or commissioned by him are thoroughly modern constructs - his own musical interpretation of ‘L’Esprit Noveau’  for the next generation.

Joined by the classiest of accompanists in Francois Killian on piano and percussionist Michael Meinen, the blueprints of each composition are delivered with refined craftsmanship. It is playing that speaks of rational thought processes and slide rule precision rather than a reliance on the impish wit or impassioned cadence of traditional euphonium performance.

What is displayed is a cultured 21st century terrain of influences and styles; one that can readily embrace Louisiana Creole jazz in the opening ‘Bogalusa’  to the leaping intervals of saxophone inspired sonority of ‘Vault’ - as if the soloist is playing the sinus rhythms on an electrocardiograph machine linked to his own heartbeat.

The technique on show is impressive, but it’s not wantonly displayed to simply make sterile statements of brilliance.

the leaping intervals of saxophone inspired sonority of ‘Vault’ - as if the soloist is playing the sinus rhythms on an electrocardiograph machine linked to his own heartbeat.

Instead we hear the dance-like expressionism of ‘Blazing’  by Fabian Kunzli and the ornate lines and sinuous melismas of the Arabic musical tongue in the ‘Atlas’  concerto by Daniel Schnyder.

Elsewhere, Bloch’s use of the bass trumpet makes for a dynamic, deliberately chaotic vista of Daniel Schnyder’s ‘Karachi’, whilst Andy Scott’s minimalist ‘From this Earth’  fits perfectly into the coolly observed ethos of a release that retains a beating heart of ingenuity deep within the glass and steel stanchions of its construction.