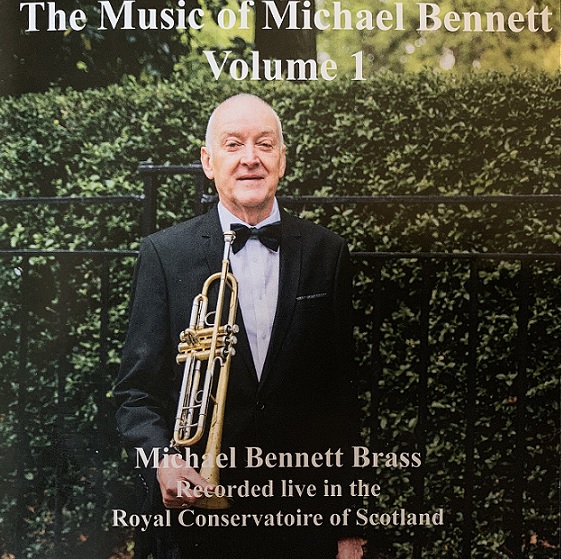 Michael Bennett is a highly regarded freelance trumpet player who following a spell as sub-principal at the BBC Northern Ireland Orchestra from 1976 to 1981 has been working in Scotland as a teacher, composer and performer.

That musical hinterland is condensed into this first volume of original works and arrangements recorded live in solo and ensemble mode at the Ledger Recital Room of the Royal Conservatoire of Scotland.

It’s a slightly uneven 43-minute menu of the new, unfamiliar and refreshed; from the ‘Prelude’ from Charpentier’s ‘Te Deum’ and the ‘Grand March’ from ‘Aida’ to ‘Scottish Consorts Volume 1’, ‘A William Byrd Suite’ and Chopin’s ‘Etude in E Minor’.

It also features two fine unaccompanied original composition solos in ‘Fantasy for Tuba’, played with bold resonance by Craig Anderson, and by Michael Bennett himself on ‘Soliloquy for Piper Alpha’, which is a haunting combination of tranquillity and heraldic echoes.

It also features two fine unaccompanied original composition solos in ‘Fantasy for Tuba’, played with bold resonance by Craig Anderson, and by Michael Bennett himself on ‘Soliloquy for Piper Alpha’, which is a haunting combination of tranquillity and heraldic echoes.

There is a cultured sense of style to each performance (the nine-piece nonet of six trumpets, French horn, trombone and tuba is directed with subtle nuance by Nigel Boddice MBE), although the live recording balance doesn’t always sit easily on the ear.

You are left appreciating the show of musical integrity, although wondering why a few judicious edits were not employed to have given things an extra sheen of overall polish.