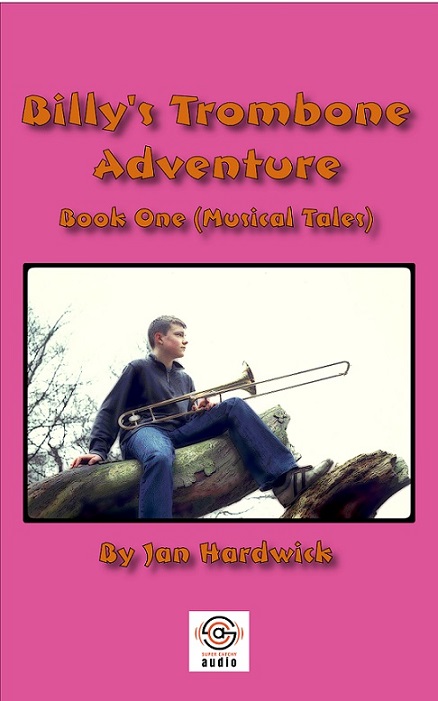 Andy Crosby is a trombonist, writer, audiobook producer and bibliophile.

When he was growing up, he never imagined going to a book shop and buying a work of fiction set in the real, let alone imaginary world of brass banding - so, he finally decided to create one himself.

And what a cracker he’s come up with.

Written under the pseudonym of Jan Hardwick, ‘Billy’s Trombone Adventure’ is something of a cross between Brassed Off meets Billy Elliott as imagined by Guillermo del Toro.

Aimed at the young teenage market, it’s based in an imaginary hinterland of what seems to be an early 1990’s north east town that wouldn’t be out of place in a Roald Dahl book; anaglypta wallpaper, music centre stereos, BMX bikes and televisions that take time to be ‘warmed up’.

It's anti-hero protagonist is Billy – a somewhat lonely child despite his family; impressionable yet knowing, happy in his isolation but yearning for acceptance.

He loves to play his trombone, although in contrast to the rest of his musical family, he’s rubbish. Determined not to be beaten in his musical endeavours he harbours a romanticised ambition to enter the next solo competition.

Eschewing the easy plot devices that could have made Billy into a trombone playing Charlie Bucket, the author takes us on a slightly different, and at times darkly tinged trip to a different musical world.

It's anti-hero protagonist is Billy – a somewhat lonely child despite his family; impressionable yet knowing, happy in his isolation but yearning for acceptance.

It is one that is inhabited by elven craftsmen who make Billy a special trombone to play, as well as real life adults hoping to find a magical solution to their seemingly impossible problems.

Crosby neatly treads a fine line between stereotype and fantastical – the writing compact, the narrative easy on the ear as well as the mind’s eye. As with Dahl, he is not afraid to explore the more disturbing little issues of youth and life.

As with Dahl, he is not afraid to explore the more disturbing little issues of youth and life.

So as much as it is about a desire for acceptance and inclusivity it speaks of difference, ambition and desire, truth and lies, shame, self-loathing, duplicity and fear; although as with the best of his tales, it is counter-balanced by excitement, a touch of the unbelievable and ultimate redemption.

The neat conclusion leaves the reader wanting the opportunity to read further explorations – which is great as the current E-book will be published in paperback and audio format in time for Christmas.

To purchase go to: https://www.amazon.co.uk/dp/B09D9PLW8N

To find out more about the book go to: http://www.supercatchyaudio.com