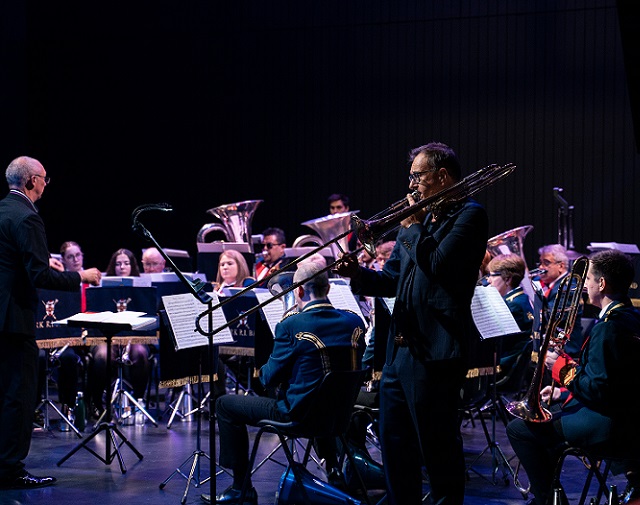 York Railway Institute Band was honoured to welcome renowned trombonist Ian Bousfield as their guest artist for this special concert.

Following a sparkling opening with the march, ‘The Whale’,  followed by ‘Festive Overture’  and ‘Os Justi’,  he took centre stage to captivate an appreciative audience who had come to fill seats at the University’s Creative Centre, with a stunning display of innate musicality.

Ian was born in York, and began his musical journey under his father Trevor and uncle Brian, who were stalwarts of Rowntree Cocoa Works Band (much later to become Shepherd’s Band). His timeline to what has been a quite incredible career in well known – as has been his playing.

‘Dance Sequence’  by Gareth Wood showcased this in full; a display of superb tone and delivery, yet this was a mere taster to the incredible virtuosity of ‘Freaks!’  by Gavin Higgins – an audacious evocation of the characters of a Victorian ‘freak show’ circus, as dark and disturbing as a Hammer Horror film.

‘Stars and Stripes Forever’  launched the second half, with the flamboyant soprano obligato of Calum Claughton delivered with panache, before Ian Bousfield returned to give the premiere of David Lancaster’s ’Becoming Winter’.

‘Bluebells of Scotland’  simply topped everything off – played with a stylistic brilliance. The audience was left gobsmacked.

Joined by the band’s trombone section of Rob Foden, Tori Clinton and Brandon Fletcher to form a quartet for the opening, the work developed into a subtle, emotive alchemy of colour and timbre from dark and cold to bright and vigorous.

A classy band rendition of ‘Light Walk’  featuring flugel Carolyn Ramsbottom provided a neat breather for the soloist as he returned for a sublime rendition of ‘Autumn Leaves’,  delivered with such a relaxed and ethereal presence. ‘Bluebells of Scotland’  simply topped everything off – played with a stylistic brilliance. The audience was left gobsmacked.

The band’s finale of ‘Procession to the Minster’  (with Ian joining a Wagnerian sounding trombone section) and the encore of ‘Hallelujah Parade’  ensured that the curtain calls were well justified, particularly for the undoubted star of the evening.

November 26 • Bilton Silver (Rugby) Band invites applicants for the role of MUSICAL DIRECTOR of the senior band. Contesting in the first section, the band has a varied programme of concerts throughout the year. The organisation also boasts a thriving training programme