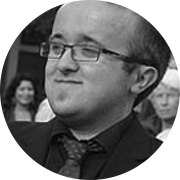 Stuart started playing the cornet at the age of 10 years old with his local band the Jedforest Instrumental band, a band that he has now been involved with for the last 14 years. Over the years there he began to progress through the ranks of the band moving from the back row to the solo chair Flugel Horn where has been since 2004.During his time with the band he has been lucky enough to gain many ad morale mentions in the competition and concert scene, most recently wining the best instrumentalist prize at the National Brass Band championships 2012 helping the band to a 5th place finish.

Away from banding Stuart is a keen soloist for which he has enjoyed some success in the competition scene over the years. In 2002 Stuart won the North West Young Musician of the year competition beating off some phenomenal talents of various genres for the title. He has also won the title off Borders slow melody champion off his age group 5 times as well as gaining 2 top 6 finishes in at the Scottish slow melody championships over the last few years.

In 2005 Stuart moved to Salford to study Music and performance under the Direction of Professor David King, Russell Gray and Howard Evans. During his time there he got the opportunity to play in such places as Regent Hall in London as well as getting the chance to play alongside some off the best brass players in the country. Stuart finished off with a 2/1 in performance and a 2/2 with honours over all in 2008 when he graduated

Since moving back to Scotland Stuart has been working mostly as teacher both privately and off and on as a supply instructor in the Borders and Midlothian trying to give back something off what he has learned in his time down in Salford. Stuart in 2012 was also appointed as one off the SBBA Regional Development officers working along side their Development Manager Andrew Duncan doing recruitment workshops and helping bands in the Borders in any way he can.

Stuart has also over the last 7 years been working as Conductor, a passion off his that he has been trying to build on and develop in recent times getting to work with and learn from various Great brass band musician such as Alan Fernie, Ian Porthouse, Russell Gray and Alan Withington. Currently Stuart works as MD off the Penicuik Silver Band and Galashiels Town band. He also works a lot in the youth band field heading up Penicuik Youth Band,Jedforest Band Buddies, Galashiels Youth, Galashiels Junior Bands as well as being visiting MD off the Peebles concert band and taking on any freelance conducting that he is asked to do.