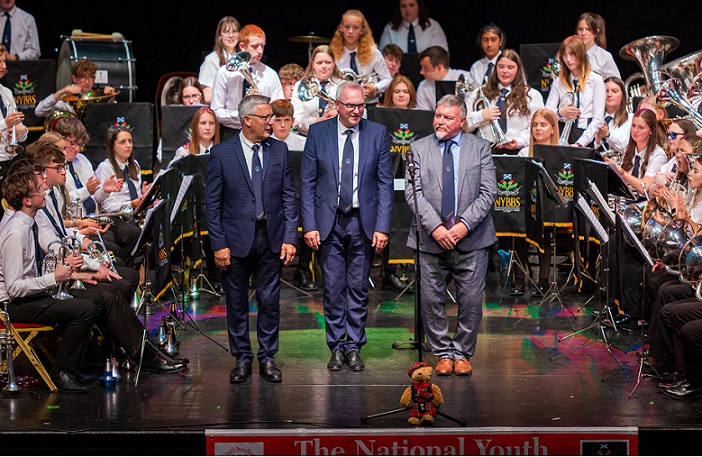 It was standing room only as the Reserve Band followed by its senior sibling - around 100 musicians in all – took to the stage for this thoroughly enjoyable evening concert.

The Reserve Band, led by John Boax, demonstrated refinement from the off in Michael Mulford’s ‘The Cheeky Wee Two-Step’.

The 150th anniversary of Ralph Vaughan Williams’ birth was marked by ‘My Bonnie Boy’  from his ‘English Folk Songs Suite’. It was an apt inclusion; the sounds dark and brooding, the intonation settled, the ensemble balance neatly observed.

The basses set a solid groove in ‘Joyful, Joyful’  (arr. Leonard Ballantine), the strains of Beethoven’s ‘Ode to Joy’  rising to the fore in a positively buoyant rendition.

Equally buoyant was tutor Charlie Farren, his grin as wide as the Forth Bridge as he took the baton in ‘The Mask of Zorro’ , played in swashbuckling style. The perfect masked hero was principal euphonium John Oliver who channelled his inner Zorro with confident aplomb.

Equally buoyant was tutor Charlie Farren, his grin as wide as the Forth Bridge as he took the baton in ‘The Mask of Zorro’ and played with swashbuckling style.

‘Baby Mine’  from Disney film ‘Dumbo’ was treated with admirable restraint, enhanced by a humorous slideshow of pics of staff. It contrasted nicely with ‘Slaidburn Goes Brazilian’  - an unashamedly zany take on the William Rimmer march by tutor Gareth Bowman, who took the baton.

Barrie Gott’s ‘Daniel’  and ‘Overdrive’  by Paul Lovatt-Cooper, saw rhythm and energy abound to round off an engaging first half set.

The senior NYBBS ensemble paid tribute to the much missed and loved Richard Evans.

Ian Porthouse, who spoke of his influence on his musical career, walked on to Goff Richards’ ‘Strike up the Band’ -  given an energetic reading in which the euphoniums relished the florid lines, whilst former course director Neil Cross paid his own eloquent tribute to a friend with whom he ran many a NYBBS course.

‘Music For a Festival’  (Philip Sparke) was recorded by Richard in the 1980s with Leyland Band and was played with mature understanding. Demonstrating characteristic subtle gestures, the MD drew an array of colours from the ensemble.

‘Music For a Festival’ (Philip Sparke) was recorded by Richard in the 1980s with Leyland Band and was played with mature understanding. Demonstrating characteristic subtle gesture, the MD drew an array of colours from the ensemble.

Angus Ritchie (euphonium) and Calum Blair (cornet) provided elegant contributions while the central section had a luxurious warmth; wrapping itself like a cosy blanket around the (very cosy) audience.

Andrew McMillan is the first tenor horn player to be accepted on the BMus Degree Course at the Royal Conservatoire of Scotland, and was delightfully languid in the famous Barbara Streisand ballad, ‘Evergreen’.

An unashamed monarchist, Mr Evans would have been tickled at the inclusion of William Mathis’ ‘Vivat Regina’  – played with bold tastefulness, with only the occasional lapse in ensemble towards the final stages.

More quality followed with Elgar’s ‘Nimrod’  before the programmed finale of ‘A Disney Fantasy’  displayed a chameleon-like ability of change of style and pace. Principal trombonist Anna Biggart was among the stars to shine in an effortless solo contribution.

Leigh Baker’s arrangement of ‘All Night Long’  which Richard enjoyed success at Brass in Concert, was neatly choreographed and saw Calum Blair rise into the upper reaches of the stratosphere on trumpet.

It closed with the combined forces performing Alan Fernie’s homage march, ‘Thanks Boss’   which captured Tricky Dicky’s character to a tee.

It was a super way to close a super concert.