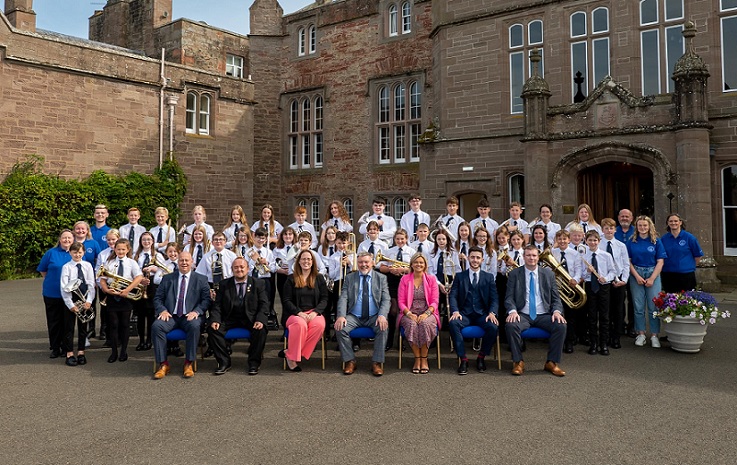 The reintroduction of the National Childrens’ Band to complement the existing National Youth Band setup several years ago has proven to be a hugely positive decision made by the Scottish Brass Band Association.

All you had to do was look at the undeniable sense of pride on the faces of the young players as they strode purposefully to the stage of Stirling’s Albert Halls for this engaging afternoon concert.

Energy bristled around the stands, the excitement palpable at performing to friends and family members after a week of intensive rehearsals and plenty of fun activities at Strathallan School in Perthshire.

Driving the enthusiasm was MD Alan Fernie, whose own passion and pride for this band and its aims and objectives knows no bounds.

The focal point of the concert was a super reworking by Alan of Eric Ball’s classic ‘Indian Summer’.  ‘Cowboys and Indians – A Frontier Romance’  was cleverly expanded into a seven-movement suite accompanied by narrative leads given by the young players.

Here he guided his talented charges through thoughtfully selected works – opening with ‘Gold Rush’  by Cameron Mabon, before a poignant reading of Kenneth Downie’s ‘In Perfect Peace’  which certainly tugged at the heart strings.

Stuart Black obviously shares the same NYBBS musical DNA and the popular tutor took the helm for Alan’s wonderful ‘The Jethart Snail’.  An eager rapport was in enthusiastic evidence, setting the scene for the jaunty march which followed.

The focal point of the concert was a super reworking by Alan of Eric Ball’s classic ‘Indian Summer’.  ‘Cowboys and Indians – A Frontier Romance’  was cleverly expanded into a seven-movement suite accompanied by narrative leads given by the young players.

The familiar strains of the original score were expertly woven into the new material; full-flung hoe downs interspersed with romantic interludes, poised gentle dances and even a dawn raid attack. The plea for peace that concluded the work was satisfying and meaningful – if very much of our inclusivity aimed times.

By ‘Slam Dunk’  (Paul Lovatt-Cooper), Alan Fernie had reached the boogying stage as the players found the infectious groove; one which permeated its way through to the audience, which despite the humidity rose to their feet in toe tapping mode.

Alan’s ‘The Rolling Hills of Home’, a work celebrating all things Scotland, provided a suitably majestic close to a well-judged afternoon concert, played with gusto, verve and dollops of delightful musicality.