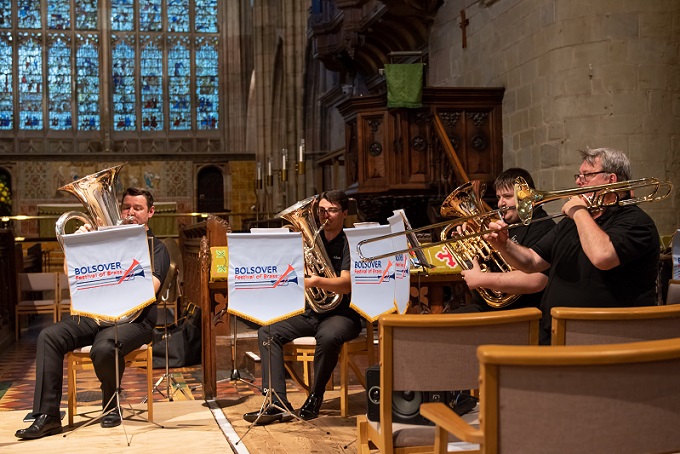 The Elgar International Brass Band Summer School has taken place at Malvern College this week with over 70 delegates enjoying a packed itinerary of music making and social activities.

The musical element has come under the leadership of Course Director Paul Holland, with an outstanding team of tutors at his disposal to inspire the players in their endeavours.

They certainly would have been after listening to this concert held in the nave of the magnificent Great Malvern Priory.

Originally built in the 11th century as a Benedictine monastery, it was restored to former medieval glory in the 19th century with the help of Sir George Gilbert Scott – the man who designed the gothic revival Albert Memorial that stands opposite the Royal Albert Hall.

There were more exotic flavoured lollipops on offer than an open day at Willy Wonka’s factory – with Roger Webster on a corno da caccia in a duet with Mark Wilkinson and Les Neish joined by Gareth Hand on a cajon for a wicked bit of tuba virtuosity.

Each of the tutors will have been more than familiar with that particular cavernous performance space, so they knew exactly how to tailor their ensemble requirements to the resonant acoustic (earlier in the day the full course band played in the grounds).

There were more exotic flavoured lollipops on offer than an open day at Willy Wonka’s factory – with Roger Webster on a corno da caccia in a duet with Mark Wilkinson and Les Neish joined by Gareth Hand on a cajon for a wicked bit of tuba virtuosity.

In between ‘Sir Duke’, ‘49th Parallel’  and ‘Cross of Honour’, Chris Thomas poured viscous liquidity on ‘Londonderry Air’  which offered relaxed contrast to the pyrotechnics of a ‘Brillante’  euph duet from Adam Bokaris and Dan Thomas and the fast tuned perc hands of Gareth Hand of ‘Robbin’ Harry’.

Steph Binns and Della Pearce flowed through the Lakme ‘Flower Duet’  and Steve Jones brought a touch of Gene Krupa to get feet tapping in the pews on ‘Sing, Sing, Sing’, before the finale of ‘Toccata in D Minor’, after which the Priory’s Custos, James Walker asked for an encore of a second helping of Bach.

It was lapped up by a delighted audience, who responded, as if being asked to rise for a hymnal, with a standing ovation.