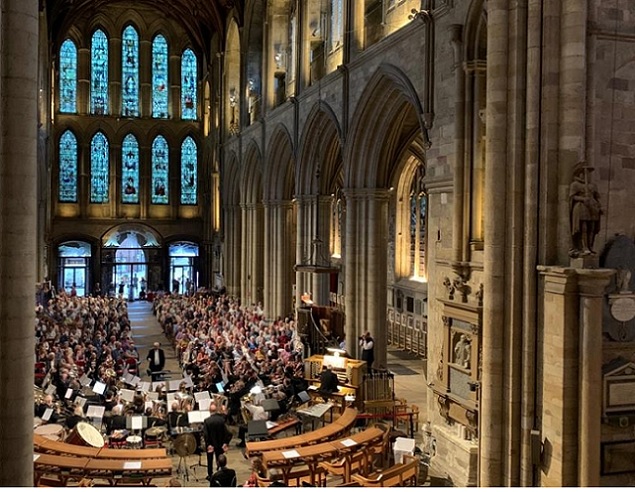 Black Dyke entertained very different musical congregations from the stages of two very different venues on their double header weekend to the west of England.

As a prelude to their appearance on the famous Pyramid stage at the Glastonbury Festival, they made a welcome return to Bridgwater for a sell-out concert in the resonating acoustic of the 13th century architecture of St Mary’s Church.

Although the audience mix may well have differed greatly in demographic make-up from the swath of music lovers that lapped up their performance the following day, the reception the Queensbury Band gained was just as vibrant.

Prof Nicholas Childs brought a potpourri of repertoire to showcase (including some sneak ‘Glasto’ previews) – from the bluff Gallic swagger of Saint-Saens’ ‘French Military March’  and Berlioz’s swashbuckling ‘Le Corsair’  to the full Americana pizzazz and beauty of Leonard Bernstein’s ‘West Side Story’.

Although the audience mix may well have differed greatly in demographic make-up from the swath of music lovers that lapped up their performance the following day, the reception the Queensbury Band gained was just as vibrant.

In between the transatlantic first half bookends came Karl Jenkins’ atmospheric ‘The Armed Man’  and two delightfully played solos from Richard Marshall with ‘Melody of the Heart’  and ‘Carrickfergus’  from Michael Cavanagh.

The second half gave ample evidence of the quality of the band’s soloists following the sprightly ‘A Fantasy of Joy’  opener.

The Wagnarian splendour of ‘Procession to the Minster’  and a fleetfooted ‘Riverdance’  in more ways than one rounded off a concert of the highest quality musicianship and presentation.