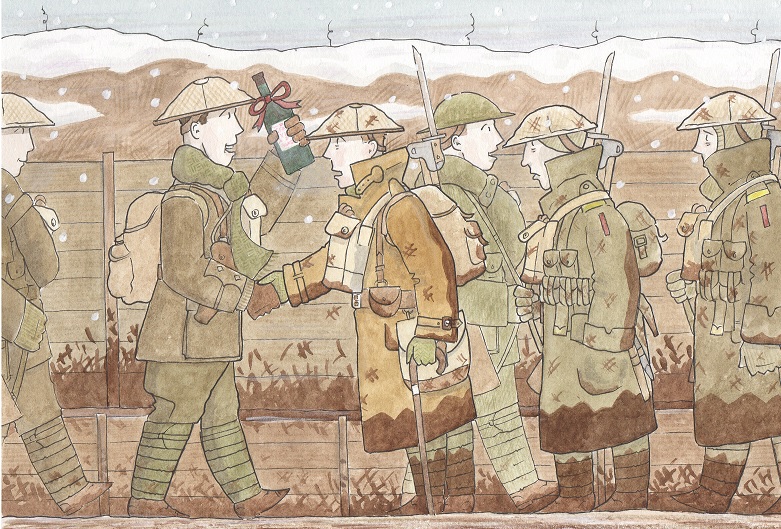 Cory’s long awaited reappearance on the concert stage coincided with the relaxation of Covid-19 rules in Wales that finally allowed their own return to full rehearsals.

It marked the end of a frustrating period of live performance inactivity for the world’s number 1 ranked band – although any rustiness was soon brushed off with the rousing sounds of Henry Goffin’s march ‘The Red Shield’.

Wilfred Heaton’s ‘Celestial Prospect’,  originally written from sketches in the 1940’s, but cruelly rejected until it resurfaced in the 1980’s was given an equally authoritative account; its interlocking elements providing a template of integrity explored with informed casting.

The substantial quality was further enhanced by a splendid premiere performance by Glyn Williams of Philip Harper’s ‘Concerto for Euphonium’.

Enhanced by the artwork of Tim Godden, it was permeated by human emotion and an acceptance of the futility of the annihilation of a generation of the bravest of men – delivered with intensity and studied insight by the soloist.

The work explored the First World War experiences of a solider’s life to and from the front lines; the overhead singing of birds to the flying shrapnel of German shells, the relaxation of time spent in reserve to the ultimate horrors of trench warfare.

Enhanced by the artwork of Tim Godden, it was permeated by human emotion and an acceptance of the futility of the annihilation of a generation of the bravest of men – delivered with intensity and studied insight by the soloist.

The first half ended with an exciting performance of ‘Un Vie De Matelot’ – all sailor swagger and brio to open, through to the languid central reflections and the return to port in triumph.

More nautical tales were to follow in the second half with Cory in lightweight entertainment mode; the colourful ‘Carnival Day’  followed by ‘Glorious Ventures’, played with glorious artistry by Tom Hutchinson.

After that it was back on the high seas with a reprise of ‘Treasure Island: A Celebration of Adventure’ – a programme that memorably claimed the Brass in Concert title late last year.

The encore rounded off Cory's return concert of substance and style.