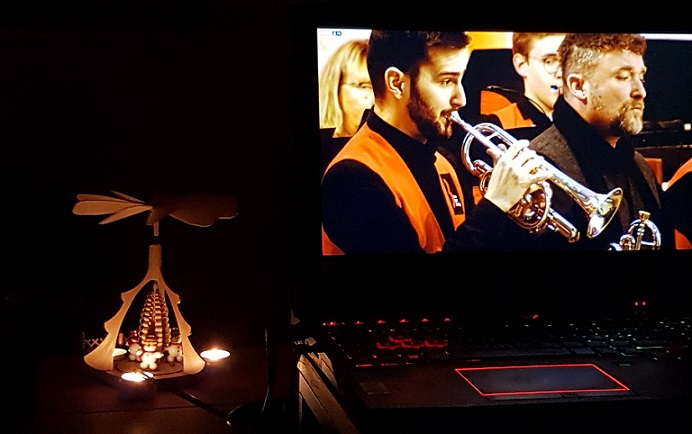 The increasing use of livestream multi-media broadcasting has opened new avenues of exploration for bands willing to match their musical ambition with hard cash investment.

At present it remains an embryonic niche market around the globe – the best examples underpinned by professional level production quality that delivers substantial value for a customer’s virtual ticket fee.

The potential though, given the need to connect to new audiences (live and ‘on demand’) offers exciting musical and financial possibilities.

Brass Band BlechKLANG has shown an admirable understanding of both: Over 300 listeners tuned in (paying around 6 Euros) from Europe to South Africa and even the USA for this concert in the splendid architectural expanse of Stadtkirche St. Michael in Jena.

It was enhanced by repertoire played with considerable spirit and skill; from the bright ‘A Tallis Anthem’  by Gert van Kroon to the closing brace of ‘Still, Still, Still’  arranged by Derek Broadbent and Jacob de Haan’s effective take on ‘Stille Nacht’.

Entitled, ‘Es sagt aus alten Tagen’  (Tales from Ancient Times) the polished broadcast was produced by Recording+Production from Nuremberg with assistance from the Sparkasse Jena, Zeiss and the Thuringian Cultural Foundation. It will be available until 6th January.

It was enhanced by repertoire played with considerable spirit and skill; from the bright ‘A Tallis Anthem’  by Gert van Kroon to the closing brace of ‘Still, Still, Still’  arranged by Derek Broadbent and Jacob de Haan’s effective take on ‘Stille Nacht’.

The historical musical span included Peter Graham’s Baroque inspired ‘Rameau Revisited’  as well as his sprightly  ‘A Carol Fantasy’; the early 17th century ‘Es ist ein Ros’ entsprungen’  by Praetorius and Sparke’s ‘A Medieval Christmas’ – all performed with stylistic understanding and clear control of dynamics in what was a lively acoustic.

As niches go, this one will be well worth exploring further in the years to come.

Enjoy the concert at: https://www.eventbrite.com/e/jenaer-blaserweihnacht-tickets-228872252067

May 24 • Freckleton Band invite expressions of interest for the position of Musical Director. This aspirational 1st section band is looking to appoint a talented, enthusiastic and forward-thinking individual to lead the band on to the next level of performance.