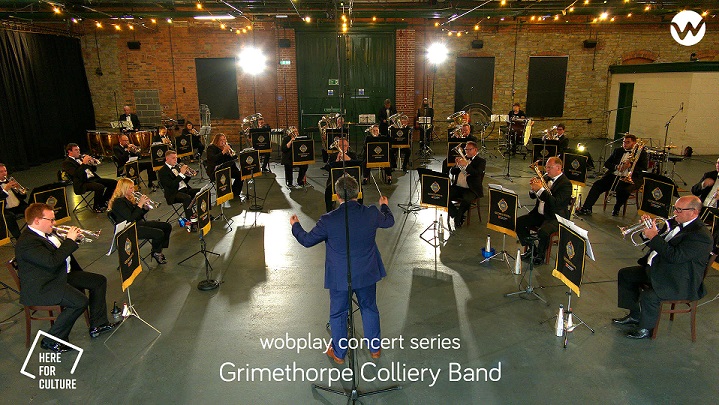 Grimethorpe provided the fifth and final concert broadcast of what has been a well-received series produced by Wobplay.com.

That referenced both the personnel and artistic direction the band hopes will see it reconnect with audiences in the post Covid-19 future – and it was their recently appointed Composer in Association, Liz Lane who provided the sparkling ‘Diamond Fanfare’ opener although the work itself was one of her earliest pieces for the medium.

The engaging sound world of new International Composer in Association, American Jack Stamp saw the band premiere his ‘Elegy in memory of Gerard Schurmann’, combining rich dissonance and mournful melancholy with oblique dedications to the works of Mahler, Holst and the composer himself.

It was also good to hear something of a posthumous appreciation of the skills of Gordon Langford - and any ambitious writer for the medium should study his craftsmanship.

The engaging sound world of new International Composer in Association, American Jack Stamp saw the band premiere his ‘Elegy in memory of Gerard Schurmann’, combining rich dissonance and mournful melancholy with oblique dedications to the works of Mahler, Holst and the composer himself.

The vibrant ‘Carnival Day’ march was counterbalanced by the breezy fun of ‘La Danza’ and the cleverest of clever homages to the Savoy Operas of W.S Gilbert and Arthur Sullivan in ‘A Sullivan Fantasy’ - which moved as stately as a galleon from one excerpt to another without the merest hint of an all too familiar Luddite gear change or crass Sibelius computer programme trick.

The soloists, Iain Culross and Adam Bokaris dipped into the core repertoire for cornet and euphonium for their polished renditions of ‘Jubilance’ and ‘Rule Britannia’, played with a classy touch of elan, whilst Chris Binns and Seb Williman were perhaps the slightly too well behaved feline protagonists in ‘Duet for Two Cats’.