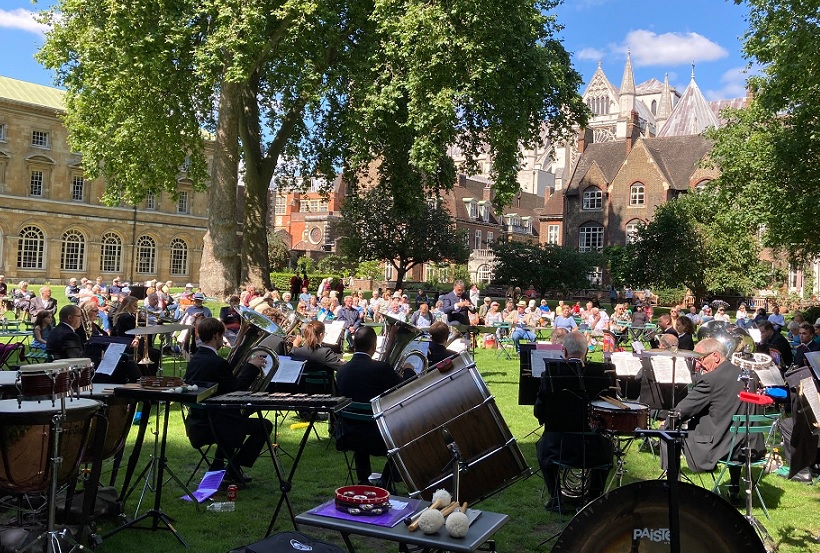 After their long Covid-19 hibernation, the Friary Band returned to the concert platform with an appearance in the wonderful setting of the College Gardens of Westminster Abbey.

It was a relaxed occasion (the odd Police siren warned of trouble with marching protesters rather than the MDs familiar old jokes!), with the players in determined mode to rid themselves of the rust of inactivity by oiling their wheels on well-chosen repertoire (all that missing was Ketlebey’s  ‘In  Monastery Garden’).

The band has also undergone a subtle rebranding process in the past 18 months or so as they look to enhance their musical ambitions of being recognised amongst the very best elite level contest competitors (an early acid test coming at the nearby Albert Hall in October).

On this form the trajectory continues to head in the right direction.

From the opening bars of Gregson's  'Prelude to an Occasion'  the band stayed intelligently within its dynamic and technical boundaries - allowing the overture to  'Die Fledermaus'  that followed to capture its light wit and crisp style.

From the opening bars of Gregson's  'Prelude to an Occasion'  the band stayed intelligently within its dynamic and technical boundaries - allowing the overture to  'Die Fledermaus'  that followed to capture its light wit and crisp style.

Particularly striking was  'What a Wonderful World'  by Richard Straker, in a new arrangement by Callum Au, and so too in a non intended musical pun, Chris Straker's  'Grandfather's Clock' - all the better for being analogue rather than needlessly atomic powered.

Heaton's  'Just as I am'  and Goff Richards'  'Songs of Praise'  neatly changed the mood, although the speed of the Saint-Saean’s  'French Military March'  perhaps lost some of its bluff splendour in the process.

Elsewhere  'Songs of the Quay' and a  'Frolic for Trombones'  that certainly lived up to its name set things up for final furlong lactic acid gasp on Borodin's  'Polovtsian Dances'  to round off an enjoyable concert return.