The Mountbatten Festival of Music 2021 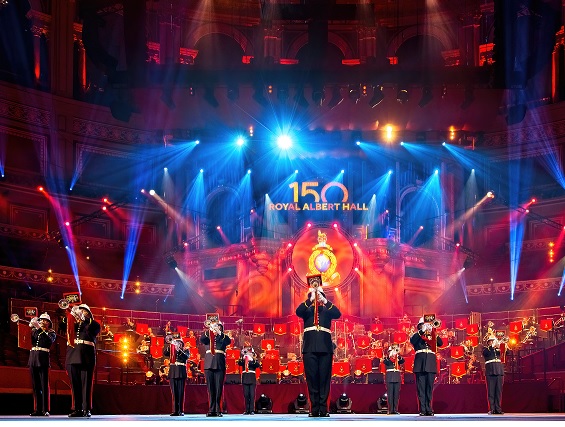 It’s a well-worn cliché, but it still holds true: The British armed forces in all its various guises do know how to put on a presentational spectacle.

That was certainly the case with the 49th Mountbatten Festival of Music broadcast from the Royal Albert Hall.

Despite the lack of a live 'in-house' audience due Covid-19 restrictions, regulations and guidelines to adhere to, the 57 Royal Marines musicians, joined by the Fanfare Team and Corps of Drums produced a concert performance of rich visual and musical excellence.

It was uplifting stuff – cleverly choreographed to make full use of the vast spaces of the auditorium and its imposing acoustic right from the first notes of the filmatic ‘Sesquicentennial’  by WO1 Ivan Hutchinson RM, celebrating the 150th anniversary of the iconic concert hall in the heart of London.

‘Stallion’, ‘Mons Repos’  and the new theme music to Formula 1, featuring the precision skills of members of the Corps of Drums, was all fusion and hybrid exhaust fumes excitement to set the tone for the next hour and half.

It was not just the presentation that embraced the opportunity to showcase variety, with the music on offer an eclectic spectrum of genres.

‘Stallion’, ‘Mons Repos’  and the new theme music to Formula 1, featuring the precision skills of members of the Corps of Drums, was all fusion and hybrid exhaust fumes excitement to set the tone for the next hour and half.

That included the superb ‘The Captain General’  march (in honour of their Captain General the Duke of Edinburgh) ‘Once a Royal Marine’, ‘El Camino Real’  and ‘The Music of Morricone’  – all delivered with stylish elan and more than a peso or two of wit, whilst the Neil Diamond 'Decades’  was a 'Sweet Caroline' blockbuster karaoke singalong.

‘Healer’ (NHS Tribute) and ‘The Unknown Warrior’, a finely attuned multi-media historical storyboard suite (again written by WO1 Ivan Hutchinson RM) were timely reminders of dedication and sacrifice, delivered with pride, pomp and reverence to close.

With proceeds going to appropriate charities – the musical splendour of ‘Heart of Oak’  and Alford’s jaunty ‘A Life on the Ocean Wave’  rounded things off with polished substance.