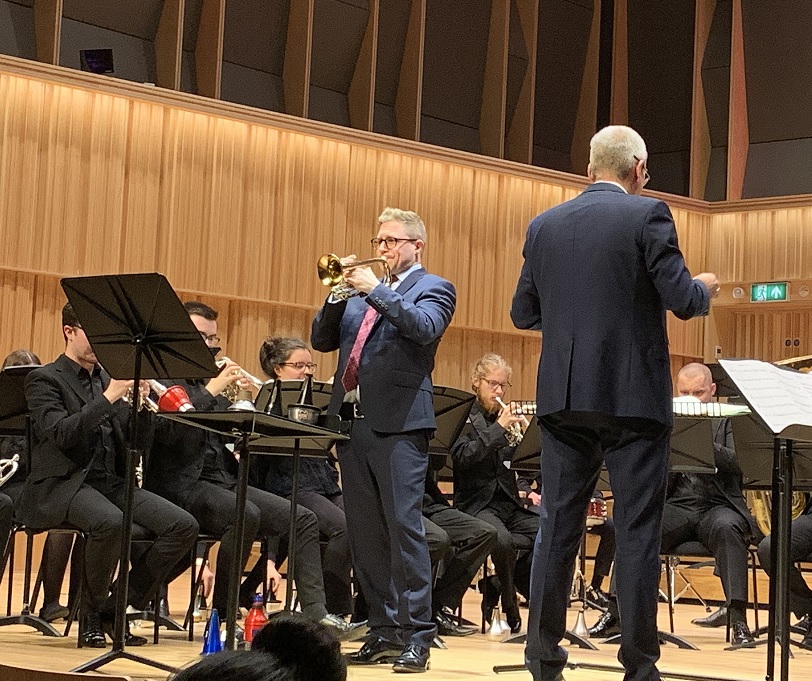 Philip Cobb’s superb rendition of Ernest Tomlinson’s immense ‘Cornet Concerto’ provided ample evidence of the high tensile arc of musical connectivity that exists between him and his most celebrated of LSO principal trumpet predecessors.

The legendary Maurice Murphy gave the world premiere of the work - one greeted with a level of astonished disbelief at the 1974 Royal Albert Hall Gala Concert.

Since then it has rarely been conquered with the same swaggering élan as that displayed here - a performance distilled in a spirit of fearless adventure; a lean, muscular arrogance of intoxicating brilliance, each fragmentary motif played with the same level of consideration as that of the broadest flowing lines.

By its close you were left to pick up your bottom jaw from your lap.

Since then it has rarely been conquered with the same swaggering élan as that displayed here - a performance distilled in a spirit of fearless adventure; a lean, muscular arrogance of intoxicating brilliance, each fragmentary motif played with the same level of consideration as that of the broadest flowing lines.

The counter balance was provided by a superb interpretation of Gordon Langford’s under-rated ‘Rhapsody for Trombone’ – a work (premiered by Don Lusher at the Albert Hall Gala Concert of 1975) whose ease of musical thought processing disguises an underbelly of slab steel difficulty.

Peter Moore respectfully moulded it into a thing of rare beauty - ‘Lusheroso’ in every aspect – measured to the musical millimetre, burnished in gold.

Throughout, the RBC Brass Band performed with concentrated thoughtfulness - aided by the MDs invisible tether line to the LSO soloists that was never less than taut and immediate.

Earlier the evening opened with a spirited ‘Intrada: Ein’ Feste Burg’ led by student conductor Tom Stoneman, whilst the unenviable task of sharing the stage with the two superstars fell to RBC students Amy Ewen and Bethan Brown.

Due to Katrina Marzella’s ill health the duo equally fearlessly stepped in to divide the triptych female portraiture of Peter Graham’s ‘Baritone Concerto’ between them.  It was a performance of considerable high quality accomplishment.