Grimethorpe inspire next generation — and the ones after that as well...

A recent school concert with a difference saw Grimethorpe Colliery Band help inspire the children in their local community to become the brass band music makers of the future...

The pupils of Birkwood Primary School in Yorkshire recently enjoyed a special visit from their famous musical neighbours for a school concert with a difference.

Following Monday afternoon lessons Grimethorpe Colliery Band made their way through the gates and into a school hall packed to the rafters.

Music Co-ordinator Esther Sutton-Smith told 4BR: "For the past six years or so, our children have benefited from an inspirational link to the band — and all at a time when music education is constantly under increasing pressures.

Our Head teacher, Julie Allen MBE has supported this fully inclusive link every step of the way alongside the support from Barnsley Music Hub and its brilliant tutors Michael Dodd, Connor Lennon and Adrian Francis.

As well as the continuity of primary to secondary music education from Cara Ackroyd, the Head teacher of Outwood Shafton School, our children benefit from an excellent ongoing musical education. It's something we are all very proud of."

Before the concert the pupils were able to chat to the Grimethorpe players, whilst when the band were playing some of them acted as 'mute providers' — passing them to the players during their bars rest!

"That was great,"Esther added. "The adults had just as much fun watching them being an active part of the performance as they did in hearing the band play so brilliantly.

The children's faces were a picture — and it was so good to see the young girls aged 7 and 8 in particular admiring the skills, strength and musicianship of the women in the band and then to hear that they could be part of enjoying it too."

After Grimethorpe had played it was the turn of the pupils themselves to show off their skills, with the newly formed Birkwood Brass, (with players aged between 7 and 10, who have only been learning for one term) led by Mike and Connor.

With two knee-high 6 year old percussionists adding sleigh bell and claves accompaniment for 'Jingle Bells' and 'Little Donkey', the band gained a standing ovation from the audience and Grimethorpe players.

Not to be outdone were Outwood Academy Brass, made up of pupils who left since Birkwood Primary to attend secondary school. Led by Michael Dodd they also showed off their developing talents, with budding euph star, Davey Webster aged 13, playing 'Blaydon Races' with Grimethorpe accompaniment.

Esther added: "As you can imagine there were a few tears of pride and joy as well giggles and plenty of laughter throughout the concert — and it was so great to see the interaction between the Grimethorpe players and the pupils. I think some of them now have fan clubs!

One pupil came up to me and said they thought it was the most brilliant music they had heard — and they thought the roof was going to be blown off!

We can't thank Grimethorpe and especially Sandy Smith and Roger Webster for their support. They are musical role models that inspire our community — and especially our children. It showed once again that making music matters for all the best possible reasons."

In response Grimethorpe Colliery Band spokesperson Andrew Coe told 4BR: "This was a brilliant event and one that showed that developing strong, sustainable musical links to the local community and especially with schools is the way forward.

We have a proud history of youth banding going back to the early 1960s, but the challenges faced today by parents in enabling their children to enjoy making music is something that we are determined to meet head on.

Our thanks go to everyone involved — it was a sheer delight and we can't wait to return once again." Strong line-up for UK Band of the Year contest

February 27 • 10 top ranked bands will compete for the BrassPass UK Band of the Year title in Bolton later this year. 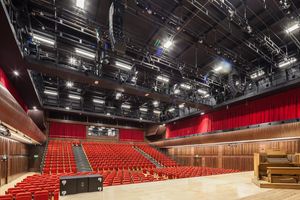 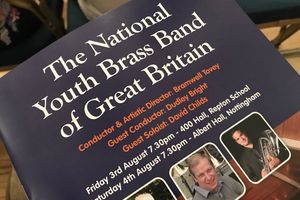 February 27 • The outstanding polycarbonate based mouthpiece from Patrik Randefalk