The music students of the University of Salford and Birmingham Conservatoire will explore musical Collision Theory in a bid to reach out to a new audience.

The brass bands of the University of Salford and Birmingham Conservatoire will join forces this February for 'Collision Theory', a brace of new music concerts.

To be held in Salford and Birmingham and directed by University of Salford Conductor in Residence Tom Davoren and Birmingham Conservatoire Director of Brass Band Studies Ian Porthouse, each band will present a programme of new music and work themed around connecting brass bands to other musical styles and genres.

Tom Davoren told 4BR that the innovative partnership will once again showcase the ability of brass bands to provide an ideal musical canvass for different musical genres.

"The Collision Theory concert concept was created last year at the University of Salford. Having both flourishing brass and popular music programmes the first event was a great success in combining a brass band with live electronics, guitars and synthesisers in student compositions.

It opened up a number of different and exciting musical avenues, so I'm delighted that we can repeat the event and expand the experience with Birmingham Conservatoire Brass Band."

Innovation and outreach have always been part of our ethos at the Conservatiore, so this musical partnership is another ideal way to showcase both elements. It's such an exciting ideaIan Porthouse

The concerts will feature solo performances by University of Salford instrumental tutors, Dr. Brett Baker and Rob Richardson in performances of 'Freaks' by Gavin Higgins and the world premiere of 'Black Light', a new work for baritone and brass band by British Composer Award Winner Paul McGhee.

Ian Porthouse added: "Innovation and outreach have always been part of our ethos at the Conservatiore, so this musical partnership is another ideal way to showcase both elements. It's such an exciting idea."

You can join the bands for 'Collision Theory' on Wednesday 15th February at Peel Hall, University of Salford, Manchester, M5 4WT and on Friday 24th February at St. Paul's Church, St. Paul's Square, Birmingham, B3 1QZ. Both concerts begin at 7.30pm. 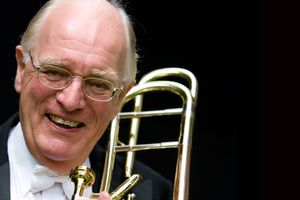 June 2 • There is a wonderful opportunity to enjoy an evening with the great Denis Wick this week — and question him about his wonderful career.

June 2 • Join Chris Helme on his regular Sunday slot — or at any time of the day, any day, for some great brass band music...

Keeping up the entertainment...

June 2 • Plenty more self-isolation performances from across the globe — from Norwegian inner tubes to a bit of political satire...

May 31 • The auction of over 200 musical instruments and accessories ends from 10.00am this morning at Ramco Auctions. So get on-line to see if you can bag a bargain...