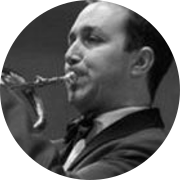 Originally from Crofton, near Wakefield, James studied the trumpet with Rita James and Chris Bacon. He started his banding life playing cornet and flugel with a local band, Sharlston Colliery, conducted by Robert Walker. James went on to spent several years as a cornet player with the Wallace Arnold Rothwell Band and a trumpet/flugel player with Harlequin Brass.

In 1997, James was awarded an Honours degree in Music from the University of Huddersfield, where he studied trumpet with Richard Martin, Murray Greig and Colin Casson as well as gaining invaluable experience from Phillip McCann in the University Brass Band.

After gaining a PGCE from Bretton Hall College near Wakefield, James moved to Edinburgh in 2000 to pursue his classroom teaching career. As a flugel player with the Whitburn Band for over a decade, James featured many times as a soloist on BBC Radio 2 'Listen to the Band' broadcasts, at the Brass in Concert Championships and also on CD recordings. James also performed many times with Rothwell and Whitburn at the British Open, the National Brass Band Championships and the European Brass Band Championships.

James is currently a Teacher of Music & Brass at George Watson's College in Edinburgh. He has been a conductor with the Scottish Schools Orchestra Trust (SScOT) since 2003 and plays trumpet/flugel with Castle Brass, a ten-piece orchestral brass ensemble based in Edinburgh. He has also conducted the Dalkeith & Monktonhall Band since 2005, guiding them to victory at the Scottish Championships in 2008 & 2010 and runners-up in 2012 & 2017, taking the band to the National Finals on each occasion. James has also had successful conducting spells at Lochgelly, taking them to the National Finals in 2005, and Whitburn, guiding them to victory at the Land O' Burns contest in 2014.

James lives near Edinburgh with his wife, Karen and daughter Zoë.