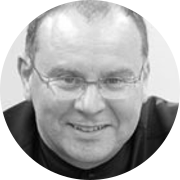 Christopher Houlding's roots are in Brass Bands. A former member of the National Youth Brass Band of Great Britain, Chris toured Japan with the London Symphony Orchestra at the invitation of Denis Wick while still studying at the Guildhall School of Music & Drama and became Principal Trombone of the Orchestra of Opera North at the age of 21. Having appeared as Guest Principal with most major UK Symphony orchestras, he continues to perform regularly with Superbrass, The Symphonic Brass of London, Philharmonia, Scottish Chamber, MusikFabrik and Mahler Chamber Orchestras.

Professor of Trombone and Brass Ensemble at the Folkwang University of Arts, Essen, Germany and Visiting Tutor at London's Guildhall School of Music & Drama, he has also served as Head of Brass at the Royal Birmingham Conservatoire and Senior Tutor in Brass and International Visiting Tutor at Manchester's Royal Northern College of Music. He is a regular guest Professor with the Gustav Mahler Jungendorchester, European Union Youth Orchestra and National Youth Orchestra of Great Britain.

As Conductor of the Guildhall & Folkwang Brass Bands, he also has a long association with the RNCM and Royal Birmingham Conservatoire Brass Bands including performances at Whit Friday Competitions, in Norway and numerous RNCM Festivals of Brass. He has also assisted brass band development at Manchester's Chetham's School of Music and has worked as Guest Conductor with Grimethorpe, Black Dyke, Brighouse, GUS and bands throughout the UK and Europe including NRW Youth Brass Band, Brass Band Düren, Brass Band Westfalen, Brass Band BlechKlang and Brass Band esBrassivo in Germany.

He has given masterclasses and workshops throughout the world including New York, Rochester, Bern, St Petersburg, Oslo, Aarhus, Porto, Lausanne, Riga, Cordoba, Ankara and Budapest, appeared as guest artist at International Festivals in Washington, Las Vegas, Nashville, Stuttgart, Hannover, Scandinavia, Aachen and Rostock and as soloist with the Netherlands Symphony Orchestra, Orchestra of Opera North and Durham Sinfonia. His Solo CD entitled 'Houlding his own' is issued on the SRC label while 'Houlding it together', a duet recording project with international colleagues, Joseph Alessi, Brett Baker, Jiggs Whigham, Carol Jarvis, Don Lucas, Niels Ole Bo Johansen, Ben van Dijk and Ansgar Striepens is available on the International Trombone Association website.

As Juror and Adjudicator, he has officiated at the British and Norwegian National Brass Band Championships, Music for Youth, International Wind Competition Moscow, Internationaler Wettbewerb Markneukirchen, Royal Overseas League Music Competition and leading Universities and Music Conservatories. A former President of the British Trombone Society and current Chairman of the International Trombone Association Executive Board, he continues to appear as soloist, conductor and educator at events throughout the world and is featured regularly as a contributor to well known Brass Journals.