A Force of Destiny
Derek Garside recalls an iconic victory

The great principal cornet recalls one of the most memorable National Championship victories in history — almost 60 years ago to the day. 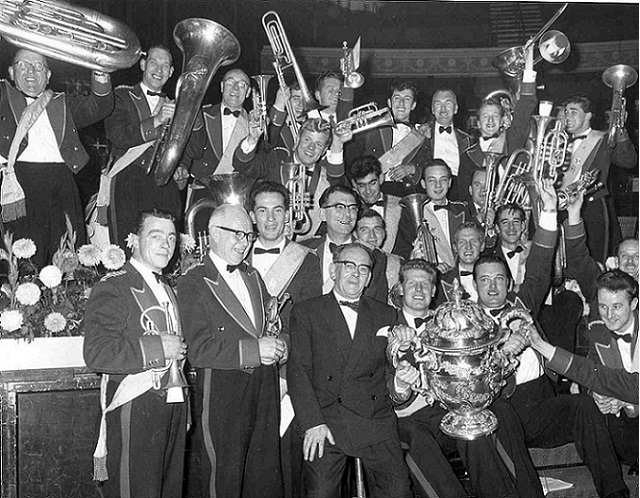 Derek Garside is now 92 years of age.  He lives quietly in Eldwick near Bingley and manages to keep in touch with friends as best he can.

He is understandably a little frail, but the aura of brass banding ‘greatness’  remains as commanding as ever – as does his modesty and reticence for any form of self-aggrandisement.

And as so many people who played with him will confirm, he also remains very much, his ‘own man’.

Almost 60 years ago to the day he was the principal cornet player of the CWS (Manchester) Band that won the National title at the Royal Albert Hall. It was one of the greatest, and arguably most memorable performances in the contest’s history.

Led by a stricken Alex Mortimer who had to sit on a wooden stool, they produced a stunning rendition of ‘The Force of Destiny’  overture to finally secure a first National title success – one that they had come so close to in the preceding years.

It was one of the greatest, and arguably most memorable performances in the contest’s history.

It has since entered brass banding folklore – embellished and enhanced perhaps, but never forgotten.

Now, just before the contest takes place again, Derek Garside recalled that special day and his affection for its iconic venue. 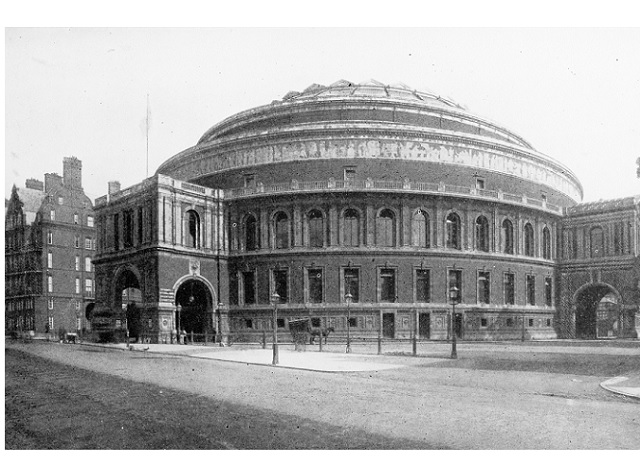 “My first recollection of the National Championships was in 1946. I was playing with Brighouse & Rastrick then, from about 1943. I was on repiano cornet and we had won the Area contest and were going to London to play ‘Oliver Cromwell’ under Eric Ball.

I was an awe-struck teenager, 16 years old, walking to the Albert Hall on the morning of the contest. I had never seen anything like the Albert Hall before in my life. Huge and blackened – not the colour it is today."

I had never seen anything like the Albert Hall before in my life. Huge and blackened – not the colour it is today

"I came back many more times of course over the next 40 years, but that memory still stands out.

We won the Championship that day and it was a great cause for celebration. Brighouse was out on its streets to welcome us home.” 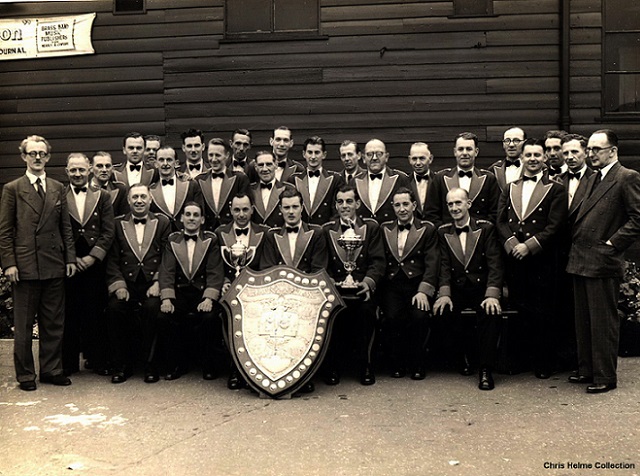 Not long after Derek decided that better playing opportunities lay elsewhere and followed his teacher Fred Roberts to CWS (Manchester). Working in the accounts department wasn’t the real attraction, but playing in a band conducted by Eric Ball was.

“I decided to follow Fred Roberts who moved to take over the Bandmaster position with CWS (Manchester) Band. Our trombone player Harry Cook had also gone there so I went too.

I turned up for an interview for a job in the accounts department a week before Christmas 1947 and got it, but it was the band I wanted to join."

I turned up for an interview for a job in the accounts department a week before Christmas 1947 and got it, but it was the band I wanted to join.

"Having been on repiano with Brighouse and then third man down, when I started with CWS I was assistant solo cornet to Charlie Unsworth who had been there a long time.”

Derek soon made his mark (his lunch time practicing in the offices stopped admiring employees from doing their work) and his talent was evident.

“I was enjoying myself and events moved from the December to the following March, and I got put on principal cornet as it was felt I was a little more reliable than Charlie. In March 1948, I did my first North West Area contest.” 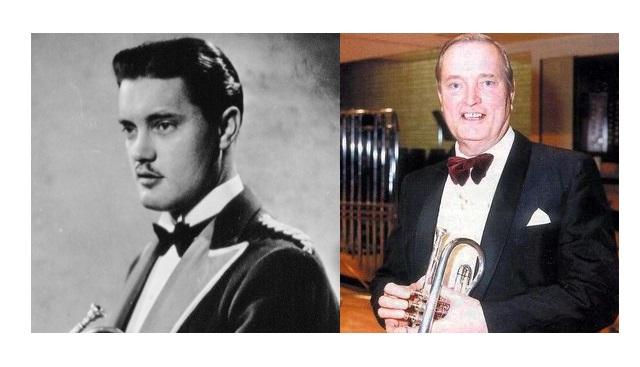 National Service then intervened. “I was called up with the RAF at Cranwell for the next two years,” he says. “I was demobbed on my 20th birthday. How could I forget that. I returned to CWS (Manchester) for the best years of my playing life.

It was so exciting going away for weeks on end. I absolutely loved it – Eastbourne, Edinburgh, Aberdeen, Plymouth – all over the place for weeks on company time. I found it so exciting."

We won the Open in 1952 and again in 1960 but not the National – and we wanted to win that so badly. We qualified every year from 1950 but never won it. We came so close though - second so many times. 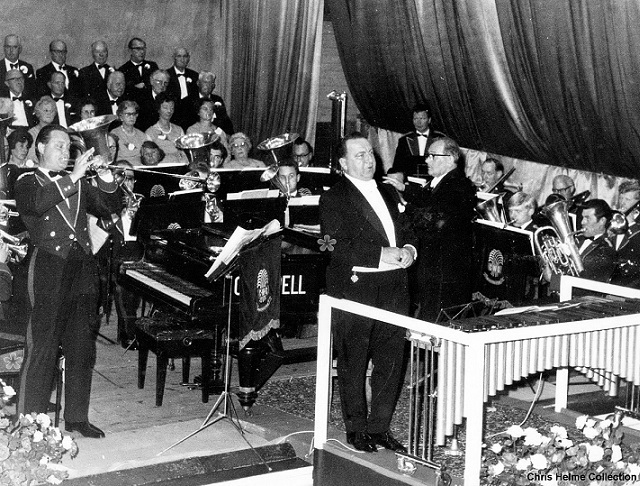 These were indeed the peak years of his playing – something his contemporaries and friends recall themselves.  They were also the years in which he embodied the fearless virtuosity of the conductor that also made his name with the band – Alex Mortimer (who took the baton in 1954).

Former CWS player Cyril Derwent said that Derek was, “…the nearest thing to perfection.  When I first heard him, I just put my instrument down.”  David Read recalled that he had, “a lip like iron. He was worth two players.”

At the Royal Albert on Saturday October 20th, 1962, Derek Garside was perfection itself – and under the most incredible of circumstances.

“'The Force of Destiny’  seemed to suit us - we were so disciplined. Alex Mortimer was tough on us, but it was the right thing to do. We really fancied our chances.

On the morning of the contest though we had the devasting news that he wasn’t feeling very well. Doctors were called and we didn’t know what was going to happen. It was a very anxious time because we had worked so very, very hard – especially Alex.  He really liked the music – its drama and excitement."

It was a very anxious time because we had worked so very, very hard – especially Alex.  He really liked the music – its drama and excitement.

"It was so off putting. We drew late (the penultimate band out of the 24 contenders) but we still didn’t know who was going to conduct us as the day went on. There was no sign of him.

Tommy White, who was the bandmaster, was prepared to do it.  We were waiting to go onto the stage and still we weren’t certain.” 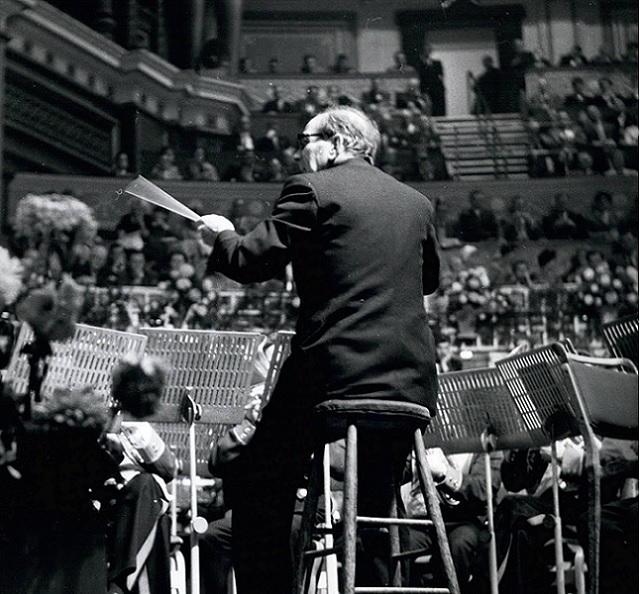 The man and the stool...

Then came the moment of truth.

“As I sat down, Alex walked on – so very slowly.  He couldn’t stand and had to have a stool. He looked terrible – not at all well.  He couldn’t have conducted standing up. Cussed chap though. You could just feel it in him.

Somehow, we gave the performance of our lives – for him. No one else."

The audience was spellbound though. The applause seemed to start bars before the end.  It was the most incredible thing

"At the end of it he seemed so small. He smiled but had to be helped off. He was completely spent. The audience was spellbound though. The applause seemed to start bars before the end.  It was the most incredible thing.”

Soon after the results were announced and CWS (Manchester) claimed the title by a clear two-point margin.

“We were on stage and just jumped in the air. It was such a relief to have finally won. Alex was revived by it all and joined the celebration. How he did it I don’t know.

The celebrations we ones we would never forget as far as we were concerned. We went back home and everyone at the firm was so pleased.” 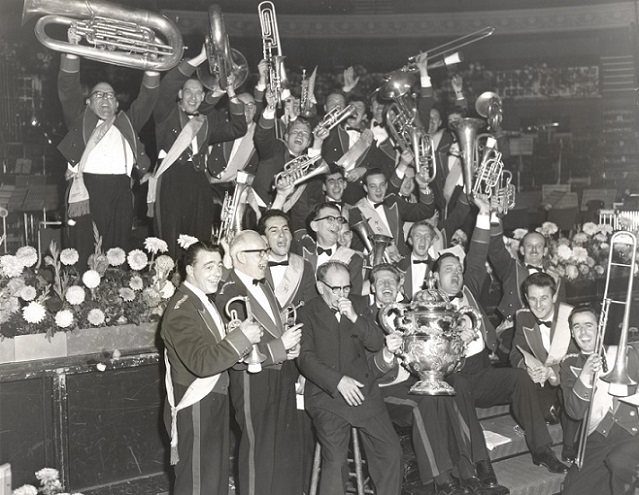 Celebrations but still with the MD on his stool

A year later they won again.

“We did it on ‘Belmont Variations’  – a better performance perhaps, but not as memorable. Then we came close again but never won it a third time."

"That first win was 60 years ago but it was like yesterday. I loved the Albert Hall. I played solos there and was honoured there, but nothing tops that win – not even band trips to Niagara Fall and America.”

And with that he very politely declines to have his picture taken. Modest and fascinating – and still commanding things on his own terms.

Those who were lucky enough to have heard him play – and especially on that victory 60 years ago, will agree.