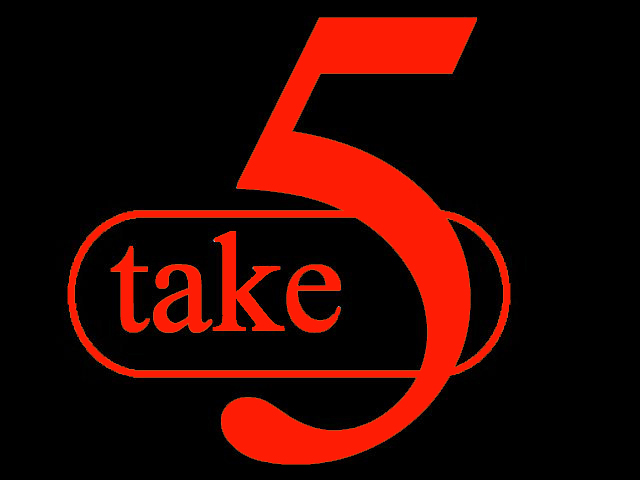 They say you should ‘Remember, Remember the 5th of November’, but it’s also worth noting that this week saw the 85th birthday of Elgar Howarth, the composer who lit a bonfire fuse under years of tradition with his very own box of ‘Fireworks’ in 1975.

His brilliantly inventive version of ‘The Young Person’s Guide to the Brass Band’ caused an explosion at the British Open that is hard to imagine nowadays.

There were conductors who swore they wouldn’t compete in Manchester after they opened their scores and were faced with musical writing that they didn’t understand or appreciate.

Traditionalists thought he was taking the mickey in noting that his ‘theme’ (wonderful as it was) was attributed to his ‘nom de guerre’ W. Hogarth Lear.

Many listeners didn’t either, and there were boos aimed at Howarth when he walked from the adjudicator’s box towards the stage at the famous King’s Hall at Belle Vue before the announcement of the results.

Traditionalists thought he was taking the mickey in noting that his ‘theme’ (wonderful as it was) was attributed to his ‘nom de guerre’ W. Hogarth Lear. 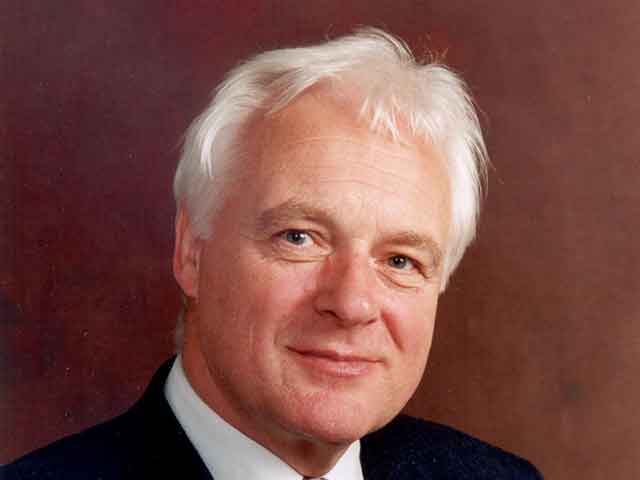 However, ‘Fireworks’  certainly had its fans: Eric Ball no less saying that it had “a sardonic wit, which I liked enormously – a sort of French sparkle to it”.

The great George Thompson called it “the work of a genius”, whilst understandably, Richard Evans, the winning conductor with Wingates Temperance on the day said it was, “…a great piece – it stretched the bands – there was nowhere to hide, everyone had to play their part.”

It still divides opinion, even today - although 45 years after its premiere it now seems somewhat stereotypically dated in many aspects.

It does however contain remarkable elements of inspiration, with the seamless transition in the fugato finale from an Allegro con brio  of crotchet 138  to a gloriously rich chorale at minim 72  a majestic, almost imperceptibly smooth Rolls Royce power surge that takes the breath away if mastered correctly.

the seamless transition in the fugato finale from an Allegro con brio  of crotchet 138  to a gloriously rich chorale at minim 72  a majestic, almost imperceptibly smooth Rolls Royce power surge that takes the breath away if mastered correctly.

Oddly, it hasn’t been recorded on many occasions since it was first heard 45 years ago – especially in its narrated form.  That’s a huge pity – as despite its stylistic limitations it remains a work of huge significance – and fun.

These are our five in chronological order to add to your play lists if you can find them. 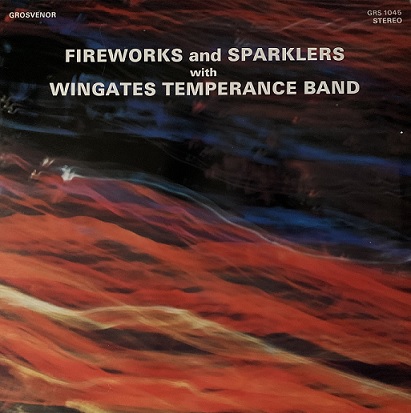 Recorded just a few months after their Belle Vue triumph, this may sound incredibly dated in technical proficiency and tonal quality by today’s standards, but that doesn’t really tell the whole story.

Richard Evans’ interpretation is laced with the dry ‘sardonic wit’ Eric Ball talked about; light, waspish and acidic even if it is sometime lost in the wide solo and vibrato sounds.

At just under 16 minutes he captures the essence of each section and individual portrait – warts and all, bringing the music to life with a touch of rough-edged élan.

Interestingly, the personnel on the recording (produced by Bram Gay to which the work is dedicated) contained a certain Allan Withington on bumper-up and John Golland on glockenspiel – musicians who made their mark in different ways in the years that followed. 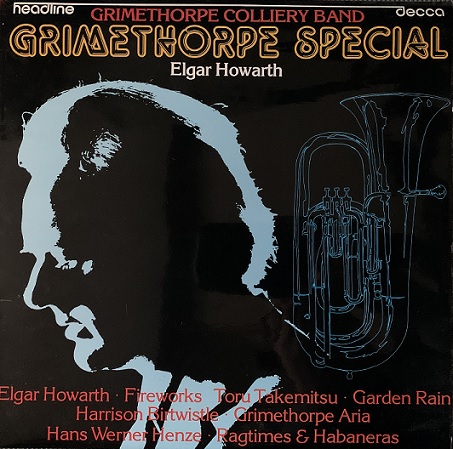 A truly remarkable recording – and not just as it’s framed in its true context with narration provided by Valarie Solti, who guides us through the score in the best traditions of a BBC ‘Listen with Mother’ presenter.  She’s also wonderfully sexy.

The opening minute bubbles with the sound of the brass orchestra ‘warming up’ before Lady ‘S’ leads us by the hand on our journey of exploration.

Howarth revels in a personal interpretation that’s nonchalantly academic; laced with a languid, passionate stylistic pulse that draws vivid contrasts of timbre and colour to bring the work to life.

The quicker elements fizz with joyful playfulness and the finale (Besses join at this point) is paced perfectly (the gear change sumptuous) to a glorious baroque close. 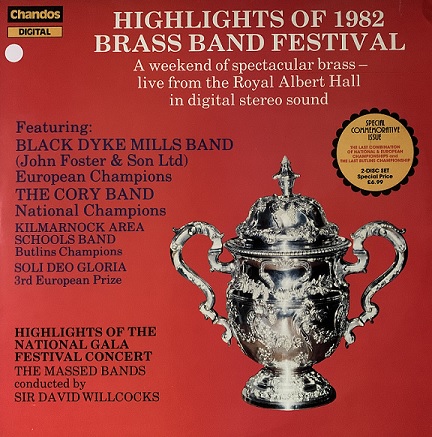 Cory had been crowned National Champion playing ‘Contest Music’  by Wilfred Heaton less than 24 hours before they took the stage for this performance.

Now Major Arthur Kenney and has band produced something almost equally fantastic with their own-choice European Championship selection (and they must have had a few sore heads) on a work of diametric polarity.

In the end it didn’t do enough to win the contest (it was placed second as they came runner-up overall to Black Dyke) but it’s still quite a show despite the odd powder burn from an errant sparkler or two around the stands.

Kenney’s glorious reading oozes stylistic brilliance; the blue touch paper lit by the impish MD from his box of tricks and sent into the Albert Hall air as if he had packed each firework with his own alchemist gunpowder mix to create the effects he wanted to delight the audience.

It’s a true virtuoso performance – and the crowd go bonkers. 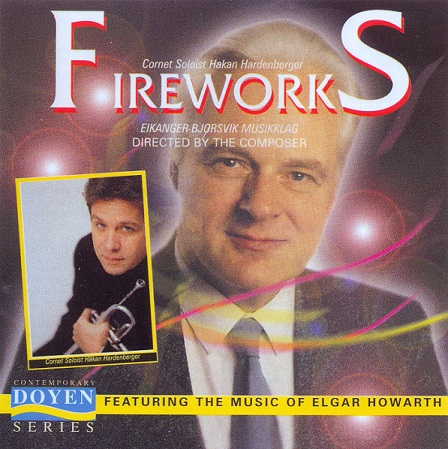 This is Elgar Howarth at the very peak of his banding powers on a CD release that retains an authentic seal of excellence to this day (there is also remarkable performance on it from Hakan Hardenberger).

The MD eschews any pretence to instil a sense of enforced wit or overt academic strictures, and simply allows the music to speak for itself.

The clarity of the thought process revealed is startling – the colours rich and vivid, the brilliance of the individual and solo elements exploding into view in front of your eyes before fading away into an inky black sky.

Eikanger are inspired; both nuanced and subtle as well as febrile and power laden – from leviathan tubas to ‘Catherine Wheel’ soprano whirling away in leading a finale that builds and builds before employing a turbo-charge boost of smoothness to an epic close.

To enjoy and purchase: http://https://wobplay.com/site/view?asset_id=DOYCD088 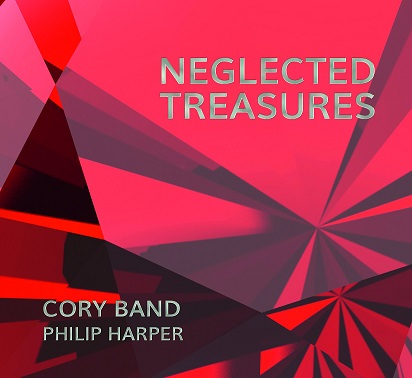 It is a bit of a curate’s pyrotechnic egg - undoubtedly brilliant (the opening cornet cadenza in particular), but somehow not quite the sum of its parts.

In comparison to the smooth silkiness of Valerie Solti, the narration sounds a bit like a Welsh local authority ‘Fireworks Night’ announcement - detached from the action behind a microphone and added on at a later date.  It’s not quite Richard Burton and 'War of the Worlds'.

Despite that, the playing sparkles and fizzes throughout, with each firework element doing the job intended, even if it’s all rather at arm’s length behind a recording safety barrier, when you really want to get a bit closer to the danger of it all for that extra thrill.

To enjoy and purchase: https://wobplay.com/site/view?asset_id=DOYCD355